Australia’s Aged Health Care Sector; A look at Regis Healthcare and its Peers

Healthcare sector is one of the largest contributors to Australian economy. A 2017 report by the Commonwealth Fund ranked Australia healthcare system as one of the best across the globe. Australia had a healthcare spending of A$180.7 billion in FY17, more than A$7,400 per person, according to the Australian Institute of Health and Welfare (AIHW). During the reported period, in real terms, Australian government spending was up 6.8% from the average growth recorded during the past five years.

Proportion of elderly people (65 years and above) is growing in Australia, with almost one in every six people in 2016 from one in seven people in 2011, as per the 2016 Census of Population and Housing. Aged care is one of the largest service sectors in the country, which has more than 2,000 aged care service providers offering three types of services: residential care, home care, and home and community care. According to an Intergenerational Report (Treasury, 2015), Australian ageing population is projected to cross 8.9 million in FY55 from 3.6 million in FY15. With increasing ageing population in the country, demand for aged care services is expected significantly grow in the coming years.

Aged care is nearly 97% covered by the Australian Government (including the Australian Government and state and territory governments). In FY18, approximately A$18 billion was spent on elderly care in the country. As per official stats, around 67% of the aged care spending was made in residential elderly care services, while community-based care (home care and home support services) accounted for 28% of the total government spending on aged care. 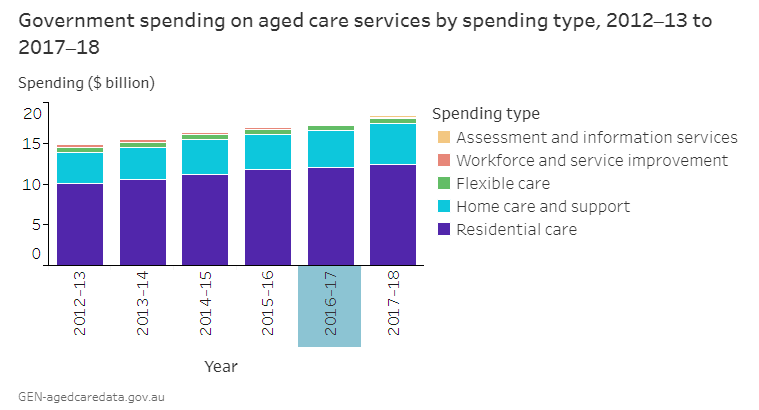 Let us have a look at recent updates from Australian elderly care provider, Regis Healthcare Limited

According to an ASX announcement made by the company on 6 June 2019, it expects its NPAT (Normalised) guidance for FY19 to be at the lower end.

The company had earlier reaffirmed its FY19 guidance on 25 March 2019, according to which NPAT was expected to be A$47-A$51 million. The March guidance also expected EBITDA for 2H FY19 to be in line with the EBITDA (normalised) for 1H FY19, standing at A$56.7 million or circa A$113 million for FY19.

Below is the glimpse of company’s financial performance in 1HFY19:

Besides, below are further financial highlights of the company’s recent market update:

Meanwhile, the company also offered FY20 guidance on the same day. Highlights are as follows:

Moreover, the company mentioned the completion of refinance of syndicated bank debt facilities worth A$515 million on terms and conditions in line with the existing facilities. Of the total, A$295 million was earlier scheduled to mature in July 2020, however, $157.5 million and $137.5 million has now been extended to mature in July 2022 and July 2023, respectively. While, the maturity period of remaining A$150 million and A$70 million tranches remain unchanged; due in May 2021 and July 2022, respectively. The company reported a Net Debt of $320 million as on 31 May 2019, in line with the expectations and well within the required covenants.

Headquartered at Southbank, Japara Healthcare Limited (ASX: JHC) is one of the leading residential aged care and retirement living service providers in Australia. The company, along with its subsidiaries, owns and operates 48 homes in New South Wales, Queensland, Victoria, Tasmania and South Australia. Caring for over 3,500 people, JHC also runs 180 independent living units in five retirement villages across the country. 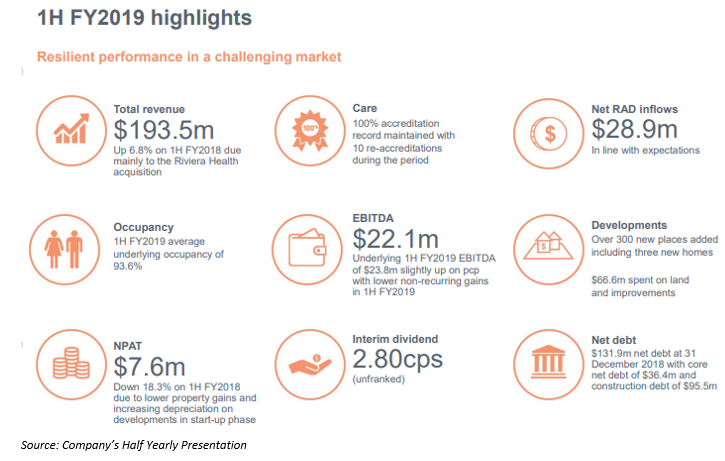 Below is the glimpse of company’s half-yearly results: 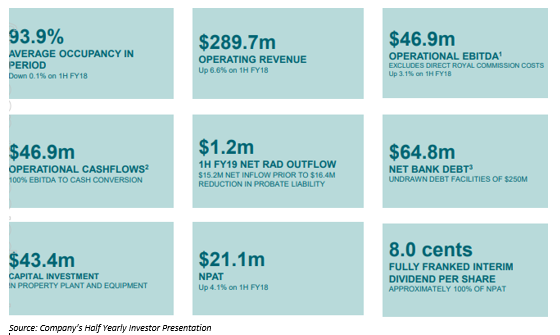