Letâs have a look at the recent updates of these companies. 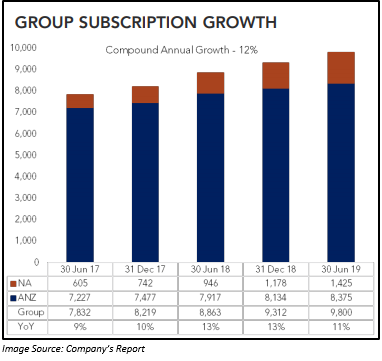 The global underlying sales of the company in FY2019 increased by 140% to $5.2 billion. The number of active customers increased by 130% to 4.6 million and above 5.2 million as at 23 August 2019. At present, over 12,500 new customers join the global platform in a single day. The number of active merchants during the period increased by 101% by the end of FY2019 and reached 35,300 as on 23 August 2019. Growth reported by the company in the regions of the US and the UK exceeded APTâs expectations.

More than 200k UK clients signed up in the 1st 15 weeks, which was above the US in the same time frame post-launch. The company also entered into a strategic partnership with VISA during the period with an aim to support its future expansion and platform innovation. Australia and New Zealand continue to grow strong with more than $1 billion of underlying sales since inception. 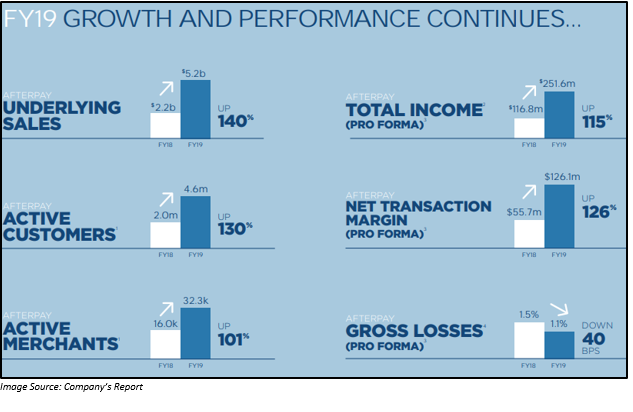 Altium Limited (ASX: ALU), a leading provider of PCB design software, on 6 September 2019 announced that director Wendy Stops had transferred some of ALUâs stock from one personal holding to a new one with no change in his total beneficial shareholding.

ALU on 3 September 2019 released an announcement providing a notice of initial substantial holding, unveiling that Mitsubishi UFJ Financial Group, Inc. has become a substantial holder in the company with 7,157,117 fully paid ordinary shares of the company, translating into a 5.46% voting power.

On 19 August 2019, ALU released its outstanding financial results for the period ended 30 June 2019. ALU was able to achieve excellent revenue growth of 23% to US$171.8 million across all its business segments as well as key regions during the period. The net profit of ALU increased by 41% to US$52.9 million and EPS grew by 41%. The number of subscribers exceeded 43,600 subscribers. The company reported a strong performance from the US and the EMEA region. Revenue from the US region increased by 14%, while from the EMEA region grew by 20%. There was a 17% growth in the Board and Systems revenue to US$126.8 million. The OctopartÂ® product of the company contributed 49% towards revenue and TASKINGÂ® delivered an increase of 37%. The EBITDA margin increased from 32% in FY2018 to 36.5% in FY2019. EPS increased by 41% to 40.57 cents and operating cash flow went up by 42% to US$69.1 million. ALU declared a final dividend of A$ 18 cents per share.

Xero Limited (ASX: XRO), an IT sector player that offers small businesses with online accounting software, recently conducted its AGM and released a presentation on 15 August 2019.

The company also highlighted its FY2019 performance for the year ended 31 March 2019. XRO has a strong business model with annualised monthly recurring revenue (AMRR) of $154 million. AMRR represents a more than 32% growth in a y-o-y term. The free cash flow increased by 35% y-o-y to $6.5 million. The operating revenue of the company increased by 36% to $552.8 million.

APX reported an increase of 60% in its revenue to $245.1 million. Underlying EBITDA went up by 81% to $46.3 million, while statutory EBITDA grew by 48%. Underlying NPAT increased by 67% to $29.6 million, and statutory NPAT increased by 33% to $18.6 million. There was an increase of 48% in relevance revenue to $193.7 million. Leapforce got fully integrated, while Figure Eight is speeding up the technology roadmap, helping the company in diversifying its revenue and expanding markets.

The company also delivered a strong core performance in speech and image data. 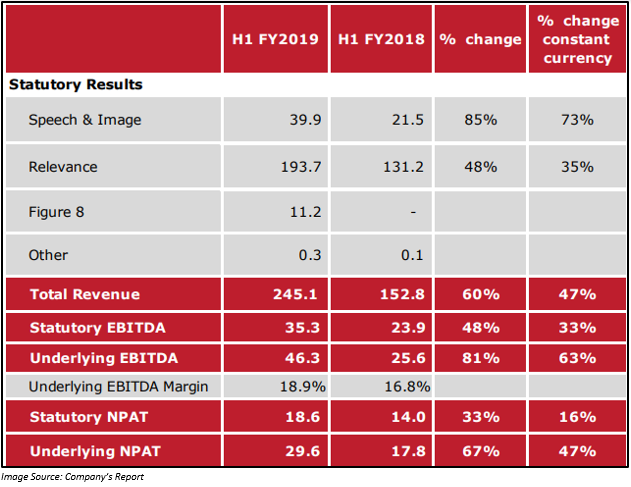