Australia previously had surpassed the LNG volume exports from Qatar in November 2018 and April 2019 to sit among the worldâs largest LNG exporters. The market now seems concerned over the precedent effect of domestic shortage and hiked price of natural gas over the higher LNG exports.

However, the latest measures adopted by the Australian government along with new natural gas exploration, and high LNG production capacity coupled with new projects in line to reach full capacity could make sure that history doesnât repeat itself while Australia could permanently gain the number one spot in the LNG space.

In 2015, Australian become the worldâs second-largest LNG exporter, which in turn, caused the shortage of natural gas in the domestic market, due to which the natural gas prices spiked causing problems for the domestic natural gas-dependent players.

The eastern and southeastern Australia market witnessed a shortfall of natural gas previously due to an increase in production from the LNG projects in eastern Australia amidst higher exports.

The western and eastern natural gas and electricity markets in Australia are separate, and in 2016 eastern Australia, where 86 per cent of the Australian population is inhabitant, accounted for 43 per cent of the countryâs total LNG exports.

Eastern Australia, where the five states- South Australia, Queensland, New South Wales, Victoria and Tasmania had significant LNG projects witnessed a spike in natural gas prices, and when the LNG projects in Queensland started, the domestic prices of natural gas doubled in eastern and southeastern parts of Australia in mid-2016 and early 2017.

However, the increased export volumes just made a fuss in the domestic market, and the economic value of the eastern states felt pressure over the falling revenue from the LNG exports.

The crude oil prices- which drives the LNG price, fell in the international market from late mid of 2014 to mid-2017; and, in mid-2016 to early 2017 natural gas prices in the domestic market surpassed the LNG export price of Australia to Japan, which is the primary market for the Australian LNG export.

In 2016, the LNG exports project in Queensland consumed almost twice of the eastern and southeastern domestic consumption of natural gas, and over such high consumption from the LNG exports, the Australian Energy Market Operator (or AEMO), which oversees the natural gas and electricity retail market, projected a natural gas shortfall of up to 0.27 billion cubic feet per day in 2018 and 0.26 billion cubic feet per day in 2019.

The security mechanism stated that, if the use of natural gas by the LNG projects result in the shortfall of the gas in the domestic market., those projects may be required to either limit their export or have to find new gas resources.

Post the implementation of the ADGSM, three large LNG producers in eastern Australia- Santos Limited (ASX: STO), Origin Energy (ASX: ORG), and Royal Dutch Shell entered into an agreement with the Federal government to provide natural gas supply to the domestic market and cover the estimated shortfall by the Australian Energy Market Operator.

The AEMO further estimated that Australia would export 80 per cent of the indigenous LNG by 2020.

Australia exported 70 million tonnes of LNG in 2017-2018, which in turn, accounted for A$50 billion. While the LNG prices cracked in the global market until the second quarter of 2019. The Australian Department of Industry, Innovation and Science (or DIIS) estimates the LNG exports earning to reach A$54 billion in 2019-2020 over higher export volumes.

Over the estimated demand growth for LNG in China, there is a wave of investment into the LNG projects in Australia. 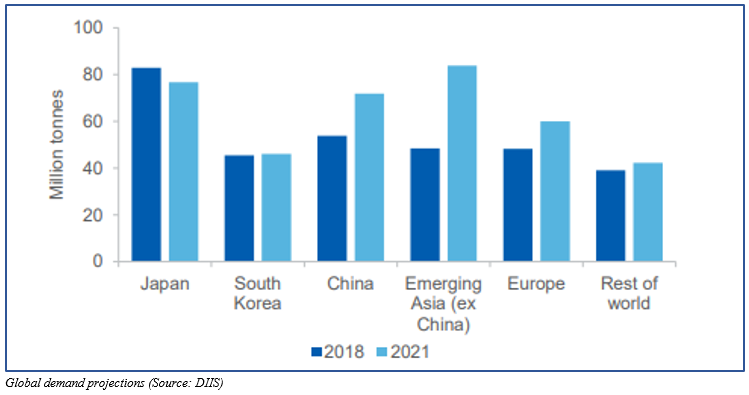 Japan, which claimed the number one spot in the LNG consumption is expected to reduce the energy generation from LNG products as the nuclear reactors coupled with coal-fired power plant and renewable energy are coming back online with a rabbit pace.

China imported 54 million tonnes of LNG and gained the number two spot in the LNG import. Chinaâs LNG import continued to increase rapidly in the second half of the year 2019, and Chinaâs import increased 19 per cent in the first five months of the year 2019 as compared to the same period in 2018. 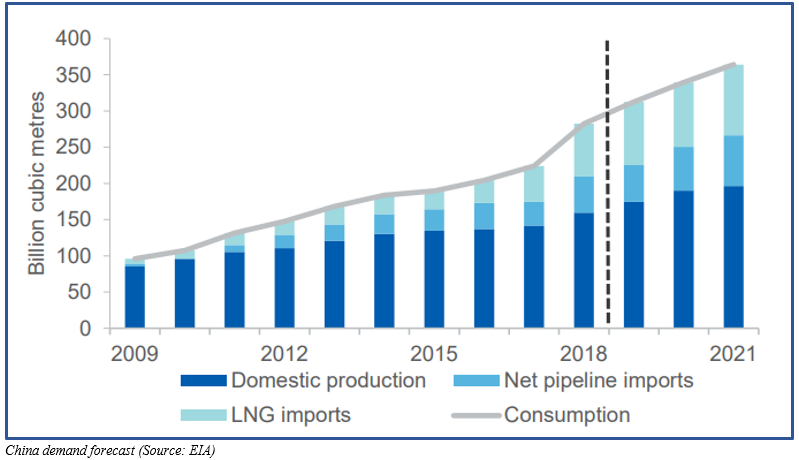 The Australian DIIS predicts that the LNG import in China would reach 72 million tonnes (98 billion cubic metres) in 2021; however, the increased stance of China to promote its domestic supply could provide a potential risk to the forecast.

Other developing Asian countries such as India, Bangladesh, Indonesia are expected to rely high on LNG for energy generation, which in turn supports the predicted global growth in LNG consumption.

Post glancing over the global demand side, let us now take a look over the supply side in the global market.

Australia and the United States are getting ready to top the supply chain, along with Qatar.

While we previously spoke about the natural gas scenario and LNG exports scenario in the United States, let us now take a look at the Australia LNG strength.

Australia On Track to Surpass Qatar In LNG Space:

The LNG exporting capacity in Australia inched up from the level of 2.6 billion cubic feet per day in 2011 to the extent of 11.4 billion cubic feet per day in the second quarter of the year 2019. Once the LNG projects of Australia such as Wheatstone, Ichthys, and Prelude Floating LNG ramp-ups to full capacity, it would further add to the production and the LNG export chain of Australia.

Australian LNG exports level are anticipated to climb high in the years ahead amid the additional LNG capacity buildout from many such projects.

While the production capacity is anticipated to inch up and the exports volume and values are forecasted to increase, a particular question which now arises among the energy investors is, would the increase in production again lead to the precedent domestic conditions?

Well, there could not be a definitive answer to this, but the development in Australia could definitely help to estimate, predict, or forecast.

To secure the domestic natural gas market in Queensland, the Queensland Labour increased the royalties of the LNG operators, under the status quo, from 1 July 2019, the LNG exports in Queensland are paying an increased royalty of 2.5 per cent.

To address the issue of the domestic natural gas shortage, the government in Queensland had offered additional acreage for exploration to the Australian gas explorers.

In May 2019, the state government of Queensland awarded exploration contracts over 2,793sq km of land in Surat Basin, and apart from that the government also offered 3,700sq km for further exploration to local players.

Senex is domestically securing the offtakes agreement for its Project Atlas to supply the natural gas products in the domestic market, especially along the eastern region, where significant LNG projects operate in Australia.

Queensland government is acting in line with the LNG production, and if other states are able to offer such lands for further exploration of natural gas, it could keep the domestic market to be well supplied, while Australia makes it final and more permanent leap to surpass Qatar in terms of LNG exports in years ahead.