Gold prices are under slight pressure in the international market; however, the prices are still high enough to support the operations of ASX-listed junior gold miners. Gold prices are hovering around its new base of USD 1,500 per ounce, which is prompting the gold miners to consider their exchange options for the moneyness.

The company recently received the 1st results from CRP0017D which extended the current high-grade, bulk tonnage, copper-gold to 300m further at the Cortadera copper-gold porphyry.

As per the company, the 350m drill intersection is anticipated to return shortly of assays for a further 90m of strongly mineralised porphyry, which would register CRP0017D as the third stand out result received by the company at Cortadera copper-gold porphyry in Chile.

Hot Chili believes that the ongoing drilling would place the prospect as one of the most substantial global gold discoveries of recent times. 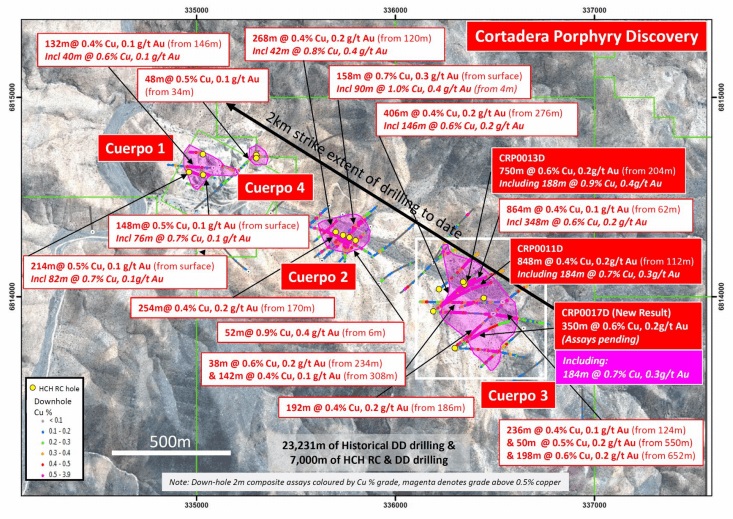 The drilling at the site confirmed and extended the enriched surface areas and high copper-gold mineralisation at depth. The recent two drill holes at the Cuerpo 3, which is among the four largest porphyries discovered till date, returned various substantial intercept such as below:

The company’s recent confirmation of high-grade bulk tonnage puts it in the unique position to take advantage of the high gold prices.

The company entered a conditional Share Sale Agreement with Sandfire Resources NL (ASX: SFR) to sell Talisman A Pty Ltd- the subsidiary which holds 30 per cent of the company’s interest in the Doolgunna Copper-Gold Project.

In January 2019, the company completed a comprehensive geological and exploration review of the Lachlan Copper-Gold project, which generated the datasets and TLH collected additional geological information from the external resources.

TLH identified multiple potential exploration targets, which is estimated by the company to host significant gold or base metal mineralisation and warrant further exploration activities.

The targets are classified as per the corroborating geological information and are as below:

The Stage 1 targets are conceptual.

The prospect areas with anomalies defined from surface sampling programs are under the Stage 2 targets.

The prospect areas with known gold or base metal mineralisation intersected in drilling with coincident surface geochemical anomalism are Stage 3 targets.

The prospect areas with economic grade and width mineralisation that are subject to targeted resource drilling are Stage 5 targets.

The on-ground exploration activities witnessed a number of testing conducted by the company on these targets and incorporated further regional geochemical sampling, infill and extension sampling, regional geophysical surveys (incl both airborne and ground-based), first-pass RC drill testing of new targets, and follow-up RC drilling of the existing target.