Crude oil sank significantly in the past as the global demand took a jab from the gloomy economic conditions, which in turn has impacted the ASX-listed energy stocks.

Despite the production cut from the OPEC and Russia, the crude oil nosedived as the global demand remained capped over the slower growth projections and high probability of global economy going into recession amid the prolonged impact of the U.S-China trade tussle, which in turn, kept a lid on the ASX-listed energy stocks.

Crude oil futures price (CFD) fell from the level of US$67.65 (high in July) to the level of US$55.88 a barrel in August (day’s low on 7 August 2019), a downfall of over 17 per cent in less than a month. However, the crude oil price is now taking a turn-around, which could boost the ASX-listed energy stocks.

The commercial crude oil inventory in the United States is witnessing a negative change from May 2019 till now. The decline in the commercial stock conventionally denotes the drawdown of demand.

A drawdown with higher imports generally indicates higher demand; while on the other hand, the decline in inventory coupled with higher domestic production and higher export signifies a fall in domestic demand.

From past two months, the commercial crude oil inventory in the United States have witnessed a decline coupled with higher exports and ramped domestic production; however, the change in August 2019 figures could bring some good news to the ASX-listed energy players. 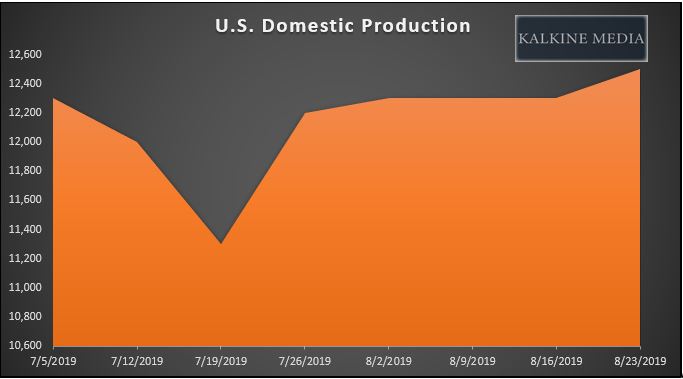 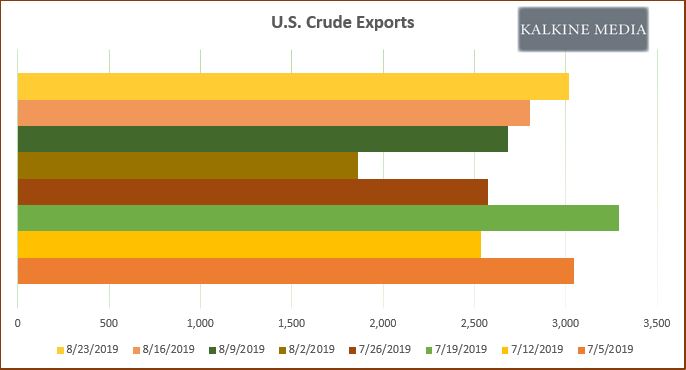 The export from the United States stood at 3,019k barrels a day for the week ended 23 August, down by 216k barrels a day or down by over 7.70 per cent against the previous week. 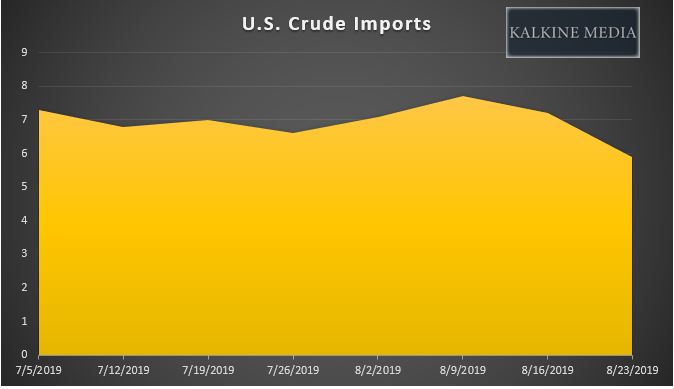 The total crude imports in the United States stood at 5,928k barrels a day for the week ended 23 August, down by 1,290k barrels a day from last week or down by almost 18 per cent.

SXY has shown promising recovery on ASX for two consecutive weeks after taking a hit over weakening oil prices in the market.

However, the ASX-listed energy stock has shown decent recovery for two weeks now, and the prices could be further supported by the improvement in crude oil prices, which further set a reference for LNG prices in the market, and in a cascade improves the gas prices as well.

Senex Energy completed the production test of the Gemba-1 gas exploration well in the Cooper Basin successfully, which in turn, enable the well to be online by the end of the year.

The Gemba-1 gas exploration well, which is on the exploration lease- PEL 516 and is wholly owned by the company is in the southwest margin of the Allunga Trough.

The production log suggested a condensate to gas ratio of approx. 14 barrels/mscf of gas and the company anticipates that the Gemba-1 would be tied into Santos (ASX: STO) operated gas gathering network in late 2019.

The processed gas would be sold in the domestic South Australian market to address the domestic shortage issues amid higher LNG production.

SXY received a PACE Gas Grant of $5.26 million from the government for progressing the Gemba-1 exploration well.

Bidenergy is trading down from the level of A$1.760 (day’s high on 12 February 2019); however, the recent agreement to share its RPA platform with Origin could boost the company ahead.

The shares of the company witnessed a breakaway gap up opening of over 86 per cent on 29 August 2019 post-signing an agreement with Origin Energy (ASX: ORG)

BID signed a three-year agreement with ORG to deploy a world-leading Robotic Process Automation (or RPA) platform. The company would deliver the RPA platform to Origin’s 14,500 Commercial and Industrial consumers following the completion of a pilot earlier in 2019.

ORG successfully completed the Bidenergy’s RPA platform pilot with its customers, and BID expects the rollout of its RPA platform to be completed by December 2019 for a term of three years.

As per the company’s estimation, once the Origin’s customer uses the platform under the agreement, the revenue generated by Bidenergy would fan the last reported ASR (as on 30 June 2019) by 12.8 per cent.