Copper is a ductile and malleable element, which is commonly found in the carbonated, sulphide and silicate deposits. Copper has a wide variety of applications like infrastructure, power generation, transportation, building construction and many more. Let’s take a look at few copper stocks trading on ASX.

An Australian mining company, Aeris Resources Limited (ASX: AIS) is involved in the exploration and development of copper from its flagship asset, the Tritton Copper Operations (Tritton) in New South Wales. The company recently upgraded its full year copper production guidance to be in the range of 26,450 tonnes to 26,650 tonnes, 4% up from the previous guidance upgrade announced on 24th April 2019. The increase in production guidance was mainly due to strong production performances from the company’s different operations and better copper grades.

In 2019 March quarter, the company produced 6,223 tonnes of copper, from which 323kt was produced from Tritton Underground Mine. At Torrens Exploration Project, the company recently drilled a target depth of ~1,300m, which demonstrated highly altered K-feldspar and magnetite-rich intervals with trace amounts of pyrite and chalcopyrite, which is an encouraging piece of news from a geological standpoint.

Till now, the two successfully completed drill holes at the Tritton Copper Operations (TD7 and TD10) have provided invaluable geological information to assist with the continued understanding and refinement of the geological and geophysical models which are used for future targeting.

During the March quarter, the company also reported ore production of 106kt from Murrawombie underground mine.

For the March quarter, the company reported C1 cash costs of $2.93/lb, which were lower than the previous quarter ($2.96), mainly on the back of lower mining, TC/RC and product handling costs. Furthermore, All-In Sustaining Costs (AISC) also decreased during the quarter, mainly due to the impact of the lower C1 unit cash costs and lower capital expenditures (capital development and sustaining capital). Capital expenditure for the March quarter was $6.4 million, including $0.5 million on exploration. In the past four quarters, the company decreased its capital expenditure at a steady pace, as depicted in the table below.

The company recently responded to the market comments of Argonaut Resources on the Torrens Project drilling program by stating that “it strongly disputes the sentiment expressed by Argonaut in their announcement”.

Australia’s leading copper developer, Hot Chili Limited (ASX: HCH) recently announced a breakthrough in the collection of historical information for the Cortadera copper-gold porphyry discovery in Chile. The company has recognised several key attributes of the Cortadera porphyry system, including the association of magnetite with copper porphyry mineralisation, indicating that the region has features like globally significant gold-rich copper porphyries, such as Alumbrera in Argentina, Cascabel in Ecuador and Batu Hijau in Indonesia. This is very reassuring news for the company and its shareholders.

The magnetic survey across Cortadera can be seen in the image below. 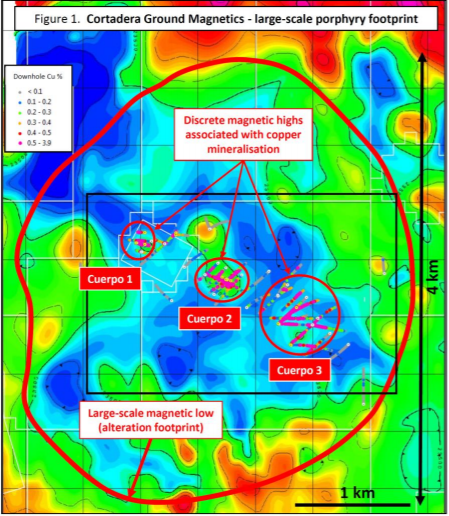 The first DD hole (CRP0012D) has located a wide intersection of porphyry from much deeper downhole. The second DD hole (CRP0013D) has been terminated early at 1,185.9m vertical depth in mineralised porphyry and the results have demonstrated Cortadera’s potential to become a company-maker in its own right and to take centre stage ahead of the company’s Productora project, located 14km away. The drill intersections have confirmed the presence of a broad zone of high grade copper and gold mineralisation.

Currently, a diamond (DD) drilling is completed across Cuerpo 3 (the largest of the four porphyries discovered to date) where previous DD drilling had identified wide copper sulphide intersections. As the company has made substantial strategic progress in the recent past, Hot Chili Limited has become a significant copper stock in the Australian stock market.

Till now, the drill programme has investigated 12 AEM targets with five targets confirmed as a priority for the follow-up RC drilling. The favorable targets are identified as targets 24, 25, 26, 28 and 29, as shown in the below image. 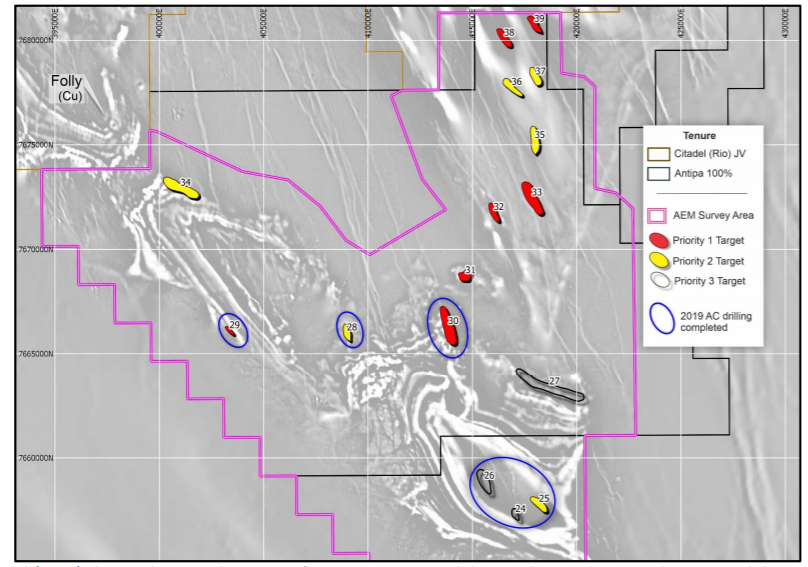 The company earlier announced that it will commence an on-ground exploration at its Citadel Project in June 2019. Australia’s leading mining and exploration company, Rio Tinto has recently confirmed its commitment to the Citadel Project Farm?in and Joint Venture in Western Australia’s Paterson Province with a budget of $3.41 million allocated to the 2019 calendar year exploration programme. The Exploration Programme includes up to 10,300m of air core, reverse circulation and diamond?core drill testing of both brownfield and greenfield targets. In March 2019, the company identified multiple gold targets on the Citadel Project.

A mineral exploration and development company, Copper Strike Limited (ASX: CSE) recently entered into a new Loan Agreement, under which, it received $3.95 million at an interest rate of 3.25%. The repayment date of the loan is after three years.

During the March quarter, the company acquired an additional 1,250,000 Syrah shares for $1.369 million, partially utilising the proceeds from the New Loan, confirming the Board’s views that the share price of Syrah has considerable upside potential.