Iron ore prices remained in pressure across the international market as the demand took a pause in China over the uncertainty of the production cut for the winter season, which further caused ASX iron ore stocks to trade under pressure.

The traders in China remained pessimistic over the demand outlook for steel, which further exerted pressure on the iron ore prices coupled with the increasing iron ore supply from both Australia and Brazil.

The iron ore inventory across the 35 major ports in China witnessed a slight drop of 0.29 per cent to stand at 116.45 million metric tonnes (as on 8 November 2019); however, despite the fall in inventory, the prices remained under pressure as the mills remained reluctant to build inventories over the uncertainty of a production halt in China in the wake of winter seasons.

The steel inventory across China also took a hit to stand at 10.26 million tonnes (as on 8 November 2019), down by 8.29 per cent against the previous reporting period.

The prices of steel tumbled slightly in the international market in the wake of profit booking; however, steel remained at the relatively upper level since the beginning of November 2019 as compared to October 2019 over the trade optimism circulating in the market around the phase one deal. 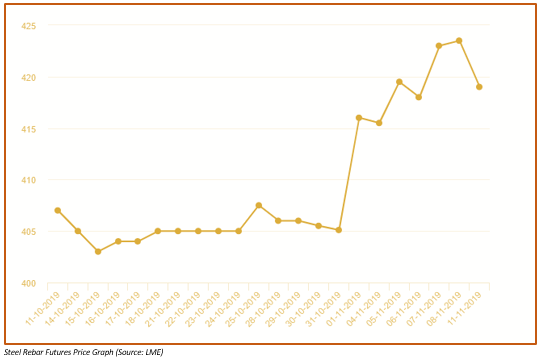 While iron ore prices are under pressure and uncertainty over the production halt is discouraging the mills from purchasing, the higher margin of steel could again prompt the steelmakers to jump in the market for restocking; however, as the supply chain is getting restored, an aggressive buying at the higher prices could be absent in the iron ore market.

For now, the lower prices are attracting higher volumes in the iron ore futures; however, the futures series remain in backwardation.

Also Read: Things to Be Familiar With Before Fishing for Mining Stocks

The backwardation of the future series represents a lower convenience yield and higher storage cost in the future, which, in turn, suggests negative sentiments of the market participants of iron ore over the long-term.

On the daily chart, the iron ore futures are trading below the 21- and 50-days exponential moving averages (EMAs), During the session today on DCE, the prices rose slightly; however, the hurdle remained intact at the 50-days EMA, which is at RMB 618.9.

The prices have now corrected over 61.8 per cent of the upside rally originated from the RMB 470.8 to reach at RMB 816.3. If the iron ore prices are able to cross and sustain above the 21- and 50-days EMA with good volumes, the prices might witness some interest from the bulls.

On applying the Ichimoku studies on the daily chart, we can observe that the prices are trading below the Span A, representing mean of the conversion line and the base line, at RMB 617.9. The spread between Span A and Span B is narrowing down with Span B, representing the mean value of 52-days high and low, reaching RMB 630.5.

The red cloud zone would act as the primary hurdle for the prices, and investors should keep an eye around the level, as a break above or failure to do so would decide further trend for the iron ore prices.

While the iron ore prices remain under pressure, the ASX iron ore stocks are reflecting the iron ore price pressure and falling; however, the multicommodity aspect of major Australian iron ore miner is somewhat supporting the prices on ASX.

To wrap up, the iron ore prices are under pressure over the fall in demand across China amid uncertainty over the future production halts in the lieu of increased pollution in the winter seasons; however, the margin of steel mills in China remained high around RMB 600 per tonne, which might prompt the Chinese mills to restock iron ore in order to fill for the falling inventory of steel in China.

In the status quo, the ASX iron ore mining stocks are trading with some pressure; however, the multicommodity perspective of the major miners are providing some support to the share prices.