During the CY2019, investors witnessed major appreciation in the stock price on account of the improved business prospect and new product offerings to the consumers. We will be discussing few stocks which has a unique business model and witnessed increased demand for its products offerings during FY19.

Afterpay Limited is an IT based company, which provides credit services to the retailers. During CY19, businesses related to ‘buy now, pay later’ services witnessed robust growth and positive responses from the Australian consumers. 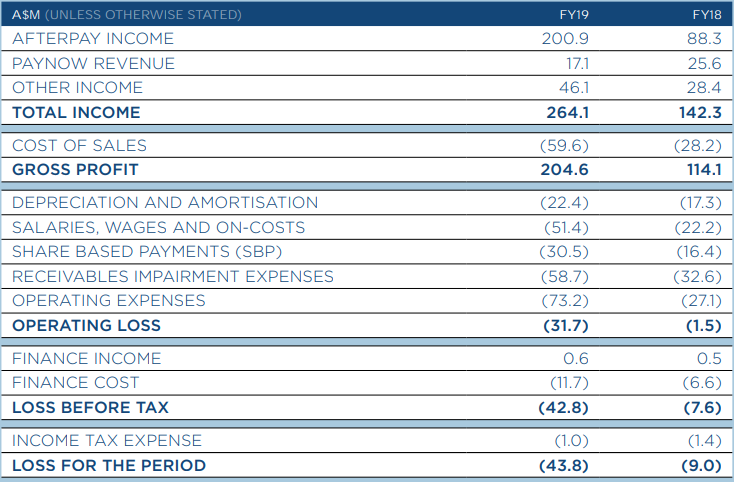 Wisetech Global Limited operates in software solutions, primarily to the logistics industry across the globe. Recently, the company informed its acquisition of Ready Korea. The acquired business is a leading solutions provider of customs bonded warehouse and trade compliance based in South Korea.

FY19 Operational Highlights for the Period ended 30 June 2019: WTC announced it FY19 full-year results, wherein the company reported revenue at $348.3 million, up 57% on y-o-y basis aided by higher usage across the existing customer base and new product launch. The business derived 33% growth in organic revenues driven by extensive business transformation, licence conversions, development partnerships and pilot programs. Recurring -revenue compromises 88% of the total revenue, which includes higher OTL and support services from different business models. The business reported its EBITDA margin at 48% excluding the acquisition, which states improvement from Cargowise One Efficiency segment. The business has expertise across the customer license transition with less than 1% attrition rate. research and development expense in terms of revenue stood at 32% as compared to 34% in FY18. The company expanded the pipeline of commercialisable innovations and upgraded more than 830 products smoothly across the CargoWise One platform for the customers across 150 countries. 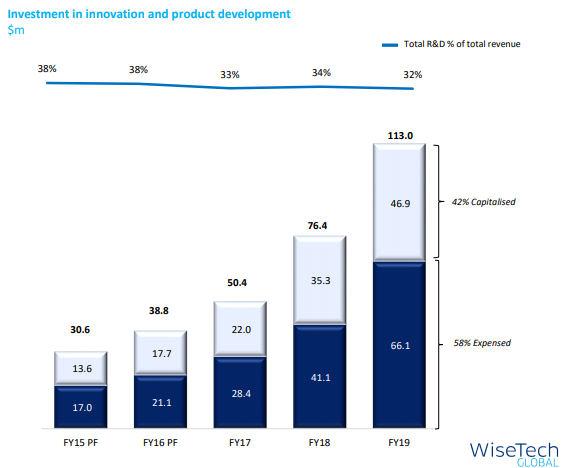 Guidance: As per the FY20 guidance, the company expects revenue of $440 million to $460 million, representing a growth of 26% - 32% on y-o-y basis. The Company expects EBITDA of $145 million to $153 million, which denotes a growth of 34% to 42% on y-o-y basis. The business is going through innovation for long-term basis, which helps to derive decent revenue growth and efficient usage of the company’s workforce.

Stock Update: The stock closed at $23.810 with a market capitalization of $7.45 billion. The stock has generated negative return of 28.39% and 17.90% in the last three months and six months, respectively. At current market price, the stock is available at a price to earnings multiples of 134.520x on TTM basis and delivered an annualized return of 0.14%. The stock is quoting at the lower band of its 52-weeks trading range of $16.29 to $38.80.

Cochlear Limited is engaged in manufacturing and marketing of Cochlear implant systems. Recently, the company informed that, it has appointed Michael Daniell to the Management committee.

Recent Update: COH received FDA clearance for one of its formulations named, Cochlear™ Osia® 2 System. The above medicine is used for conductive hearing loss, mixed hearing loss and single-sided sensorineural deafness among adults and children. The management highlighted, that The Osia 2 System has evolved at the first active osseointegrated steady-state implant across the globe. The company has used the digital piezoelectric stimulation technology - to bypass damaged areas of the natural hearing system followed by sending sound sensations directly to the cochlea.

Guidance: As per the Management guidance, the company is likely to start the marketing of the Osia 2 System during the second half of FY20 for the US market.

Stock Update: The stock of COH is trading at $225.680 with a market capitalization of $13.03 billion. The stock has generated positive returns of 4.75% and 26.93% in the last six-months and twelve months, respectively. At current market price, the stock is quoting at the P/E multiples of 47.060x on its TTM basis and generated an annualized dividend yield of 1.46%. The stock is trading at the upper band of its 52 weeks trading range of $164 to $238.54.

Guidance: As per the FY20 net profit estimates, the business anticipates being in the range of approximately USD 2,050 million to USD 2,110 million, which indicates a profitability growth of 7% to 10% on y-o-y basis. The above growth is after the inclusion of one-off financial headwind of transitioning to a new model of direct distribution in China. The management further expects that the plasma and recombinant products are likely to remain strong while the business expects opening of 40 new collection centers in FY20 on account of growing plasma collections.

Stock Update: The stock of CSL is trading at $277.300 with a market capitalization of ~ $124.83 billion. At current market price, the stock is quoting at the upper band of its 52 weeks trading range of $184.00 to $287.90. The stock has generated stellar returns of 27.64% and 46.37% in the last six months and twelve months, respectively. At current market price, the stock is available at a price to earnings multiple of 45.91x on TTM basis and generated an annualized dividend yield of 0.96%.