Gold is sailing high in the international market supported by the positive winds of global cues despite technically being in the overbought zone. The prices of the gold spot are comfortably holding the level of US$1,500 per ounce. While the gold prices are high, the ASX-listed gold miners are showcasing at the Denver Gold Forum, world’s most prestigious precious metal equities investment forum.

A Quick View Over NCM

Global gold major NCM, in its briefing report for the investors and analysts, emphasised on the company’s operating assets and low-cost profile.

Focus on the Organic Growth

The company announced additional 3,366m of drilling results from its Havieron prospect. The company received strong results, and the best intercepts were as below:

A Quick View Over NST

The group production guidance as mentioned above is in the range of 800,000 to 900,000 ounces of gold. The guidance of individual prospects is as below:

The company anticipates the second half of the year 2020 to be stronger than the first-half amid Pogo gold operation.

A glance over NST Operations

NST decided to invest US$30 million for the expansion of the processing plant at the Pogo gold mine in Alaska.

A Quick View Over RRL

RRL is among the top low-cost gold producer in the global market with consistent resource and reserves replacement. 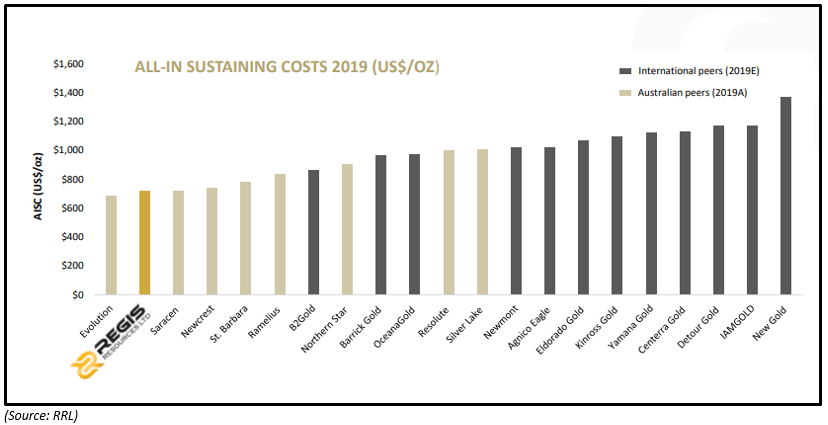 Regis is focused on replacing the reserve depletion through reserve growth, which, in turn, provides longer life to the prospects of the company.

In FY2019, the company conducted extensional drilling, which contributed substantially to the near replacement in Ore Reserves. The maiden underground Ore Reserve at Rosemount is at 123,000 ounces. The 89,000 ounces extension at the Moolart Well provided the prospect an extra year of mine life till FY22.

An aggressive exploration programme at the Duketon Project with focus over high potential areas for Mineral Resources expansion is underway.

In a nutshell, while the gold prices are knocking the heaven doors, the ASX-listed gold miners are focusing on their production ability and long-term sustainability, to gain the stakeholders’ interest, which could further provide a boost to the miners to utilise the funds to enhance their production capabilities to leap with the gold rush ahead.