ASX All Ordinaries Jumps Up; Touches A New High Of 6862 Points

Crossing its previous closing record of 6853.6 points attained in November 2007, ASX All Ordinaries closed at 6862.4 points, up by 0.7%. As anticipated by the market experts, the Australian share market opened higher today, with All Ordinaries index touching an all-time high value of 6858 points within an hour of opening trade on the ASX.

The Australian share market is uplifted by an earnings-inspired rally on the Wall Street, believe experts. The market participants were already expecting this rise amid optimistic outlook over US-China trade developments and likely rate cut by Federal Reserve.

The US stocks jumped on Tuesday post getting the information that the US officials are planning to visit China to resolve the trade dispute between them. The prospects of easier monetary policy in the US has also created a rush into the equity market.  Dow Jones Industrial Average jumped 0.65%, settling at 27,349.19, while S&P 500 edged up by 0.68% to 3005.47 as on 23 July 2019. 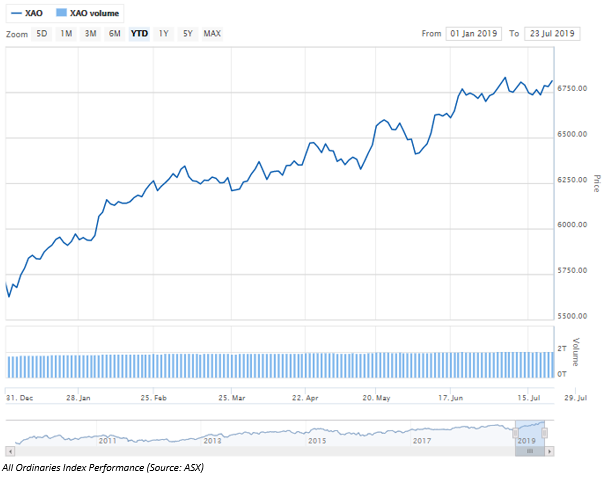 Top 10 Constituents of ASX All Ordinaries

The most quoted benchmark for Australian equities, the All-Ordinaries Index is the oldest index of shares in Australia. The index contains 500 largest companies listed on ASX by way of market capitalisation.

The following chart depicts the last one-month return (24th June 2019 – 23rd July 2019) of the top 10 constituents (by capitalisation) of ASX All Ordinaries: 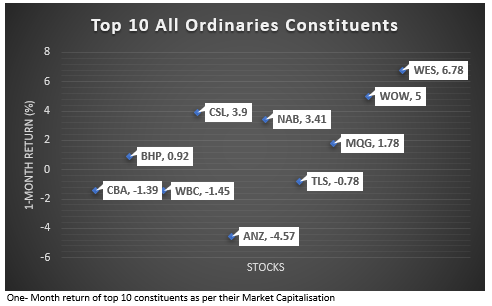 As indicated in the above chart, WES or Wesfarmers Limited has generated a maximum return of 6.78 per cent in the last one month, followed by WOW, NAB, CSL, MQG and BHP.

However; ANZ, WBC, CBA and TLS have delivered a negative return in the last one month.

The below table shows the stock performance of the All Ordinaries stocks (in order of their market capitalisation) that have generated a positive return in the one-month period:

Now, let us know more about these stocks below:

A world-leading resources company, BHP Group Limited (ASX: BHP) is engaged in the extraction and processing of iron, oil and gas and other minerals. The products of the Melbourne-headquartered Group are sold across the world, with sales and marketing led through Houston, United States and Singapore.

A biotechnology company, CSL Limited (ASX: CSL) holds an active portfolio of life-saving medicines for treating immune deficiencies and haemophilia. Apart from these medicines, the company’s portfolio incorporates vaccines used to prevent influenza. The company has two core businesses - Seqirus and CSL Behring that deliver life-saving products to over sixty countries across the globe.

The company delivered a double-digit profit growth in the first half of 2019 financial year. The company reported a rise of 11 per cent in its sales revenue to $4,505 million at constant currency basis (CC). The company’s reported a net profit after tax was 10 per cent up to $1,161 million during the period at CC. The Earnings before interest and tax of the company also witnessed a rise of 6 per cent to $1,553 million.

National Australia Bank Limited (ASX: NAB) is the largest business bank of Australia that has been serving ~9 million customers at over 900 locations in New Zealand, Australia and worldwide. The bank supports small, medium and large businesses through every stage of their business lifecycle. NAB has recently appointed Ross McEwan as its Group CEO and Managing Director.

The bank reported a 7.1 per cent rise in its cash earnings during the first half of the financial year 2019 to $2,954 million relative to the prior corresponding period. The bank informed that the half-year was the challenging period due to the royal banking commission’s inquiry. The reported cash earnings of the bank included customer-related remediation costs of $525 million.  The revenue of the bank was 1.4 per cent up with a growth in business and housing lending during the period.

Headquartered in Perth, Wesfarmers Limited (ASX: WES) has diversified business operations that include apparel and general merchandise, home improvement and outdoor living and office supplies. Besides this, Wesfarmers has an industrial division with businesses in fertilisers and energy, chemicals and safety and industrial products.

Macquarie Group Limited (ASX: MQG) opened its doors in 1969 at its Sydney office with an aim to provide international-standard investment and advisory banking services to the Australian market. The bank has now become a global business that operates in 27 countries with an expertise in different areas like agriculture and commodities, resources and energy and infrastructure.

Macquarie Bank has recently been notified by the Australian Prudential Regulation Authority to tighten its funding arrangements as the regulator found the bank violating the prudential liquidity standard. Post the APRA’s announcement, the bank has responded saying that it has removed he MAC (material adverse change) clause in the master loan agreement between Macquarie Bank Limited (MBL) and Macquarie Group Limited to avoid any effect on the MBL's liquidity coverage ratio (LCR).

Macquarie Group released its financial year 2019 results in May this year. The Group reported a net profit of AUD 2,982 million that was 17 per cent up on pcp. The Group informed that the profit for the half-year ending 31st March 2019 was also 28 per cent more than the previous half-year’s figure at AUD 1,672 million.

One of the leading retail Group of Australia, Woolworths Group Limited (ASX: WOW) manages some of the most recognised and trusted brands of Australia. The Group wants to create a top-notch experience for the consumers throughout its stores and platforms.

The Group announced its first half results for the six months ending 30th December 2018 in February 2019. The Group reported that the half-year was more challenging, but the customer satisfaction remained high during the period. The EBIT and the Group sales from continuing operations improved 1 per cent and 2.3 per cent, respectively during the half with a strong underlying shift by customers to its online segment. The NPAT attributable to Woolworths Group shareholders rose marginally by 1 per cent to $979 million during the period.