Aristocrat Leisure Limited (ASX: ALL) is an ASX listed gaming company headquartered in Sydney, Australia. The company is engaged in the designing and distributing gaming platforms and manufacturing of gaming machines. The company offers a wide range of casino management system, electronic gaming machines and slot machines.

Let’s see how the stock had performed on the charts. 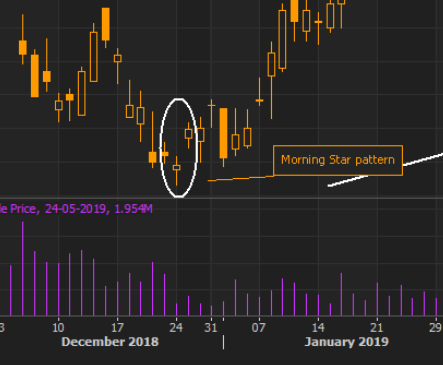 The stock made a Morning star pattern, which is a bullish reversal pattern and has higher credibility when it is formed after a steep or longer downtrend. In the case of Aristocrat, the pattern had formed after a good downtrend, and the icing on the cake was the 52-week low (as of 24 December 2018), which adds additional weightage to the reversal pattern.

After the completion, the stock has been in a consistent uptrend and had successfully attested the bullish reversal. In the later part of the uptrend the stock had faced a strong resistance around A$26.5, but on 16th May 2019, the stock delivered a successful breakout with the volume of 3.55 million shares which is quite high compared to the 20 days average volume of 1.6 million shares. The rally of this breakout is still holding on, and this breakout has accelerated the previous uptrend.