Are These Telecom Players Sitting on Some Game Changing Strategy - TLS and VOC?

About Telecom Industry: The word ‘telecommunication’ refers to the transmission of information through electric means from a distance. One can use different technologies for communication including internet, telephone, radio, television and mobile devices. The telecommunication industry around the world has evolved with continuous innovation in the sector. The arrival of digital technology has resulted in a huge transformation in the sector. The wave of development across the globe with digitization is creating opportunities for the players operating in the telecom sector.

Australian Telecommunication Market: The Australian telecom market is driven by Mobile broadband and Fibre-to-the-Node (FttN). With the greater availability of fibre and fixed-wireless broadband services, the fixed-line DSL broadband is declining in the country. The Australians are shifting towards the fibre networks as these are built on NBN's multi-technology architecture. Australia is also in the early stages of rolling out the 5G network, which could revolutionise the customer experiences. Australians may also become the first one to enjoy the experience of 5G mobile handsets.

Performance of Australian Telecommunication Market (2017-18): In a report released by the Australian Competition and Consumer Commission (ACCC) in February this year, it was mentioned that the real prices of telecommunications services had witnessed a continuous fall across most categories in 2017-18. The prices of the fixed broadband plan and mobile phone services fell 1.5 per cent and 8.3 per cent, respectively in real terms during the period.

However, the data consumption saw a continuous growth via all access technologies. Over 2017–18, the total volume downloaded rose by 29 per cent due to an increased use of social media, content streaming services and other content-rich applications.

Operational Performance: Recently, Telstra reshaped its post-paid mobile plans by cutting down 1,800 different variants to just 20. The company completely overhauled its internet and phone offerings in order to retain its existing customers and lure new ones. The company now has only four core options for users - Small (15GB of data at $50 per month), Medium (60GB data at $60 per month), Large (100GB data at $80 per month) and Extra-Large (150GB data at $100 per month).

In May this year, Telstra also launched the first 5G mobile device, the HTC 5G Hub, in Australia. 5G has become a reality for Australian consumers with the release of this mobile device.

Financial Performance: Telstra announced its HY19 results for the financial year 2019 on 14th February 2019. The company’s HY19 results were in line with FY19 guidance reported in September 2018. Telstra’s Total income, NPAT and EBITDA were down by 4.1%, 27.4% and 16.4%, respectively on a reported basis. However, the company reported solid performance in terms of customer numbers. Also, an additional 239,000 retail postpaid mobile services were added by the company during the period.

Stock Performance: The company’s stock is trading lower on the ASX today at AUD 3.825, down by 0.65 per cent relative to the last closed price (as on 3:22 PM AEST, 1 July 2019). The stock’s 52-week high and low value was recorded at AUD 3.880 and AUD 2.547, respectively. The performance of the stock has been fairly well in the past as the stock has generated a return of 40.32 per cent on a YTD basis. Also, it can be seen from the below figure that there is an upward trend in the stock price of the company in 2019 to-date:

Operational Performance: Vocus Group Limited received a nonbinding, indicative proposal for the acquisition of all of its shares at AUD 4.85 per share in cash from AGL Energy Limited on 11th June 2019. The proposal was later withdrawn by the AGL Energy Limited on 17th June 2019 as AGL was not confident whether the acquisition would create value for its shareholders or not. Prior to this, Vocus received a proposal from EQT Infrastructure which was also withdrawn later on.

Financial Performance: The company reported its H1 FY19 financial results on 27th February 2019. Vocus declared that the revenue of the company increased marginally to $974.2 million from $967.3 on PCP during the period, supported by growth in Vocus Networks. The Underlying EBITDA of the company fell 7 per cent to $176.4 million from $189.5 million on the PCP. 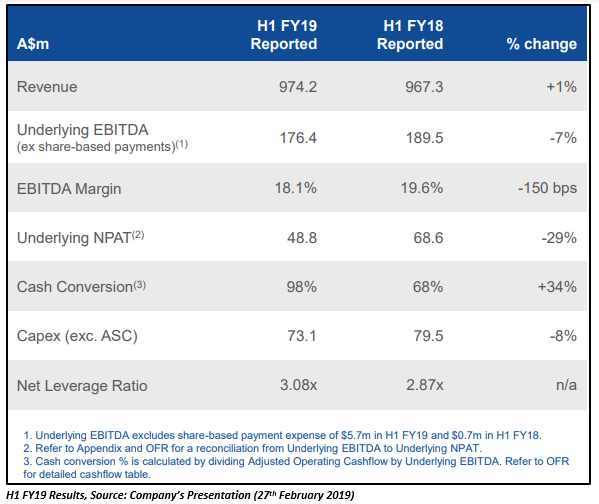