Health is wealth, and no economy can fruitfully function in the absence of this adherence. Australia is a contemporary, educated and tech-savvy economy, with its population extremely wary about the health and lifestyles. The national and state governments, along with private healthcare players are continuously expanding and paving towards contributing to a healthier Australia.

The Election Effect on Healthcare

The newly formed Morrison Government was welcomed with open arms by the Australian health sector, after they won the May federal election. Labour policies, which had been triggering the health sector were nipped in the bud for a pretty long period, or at least till the Morrison Government has the baton in its hands. The threat of a 2 per cent cap on health insurance premium upsurge for a couple of years, to address the community concerns about affordability would eventually have restricted private players, as premiums witnessed the lowest increment in 2019. This issue was off the discussion charts as soon as the Government was formed and had eased the policies, resulting in the share prices of ASX-listed health companies to rise and keep the momentum upward.

Are the latest APRA figures worrisome?

Australia’s independent statutory authority, the Australian Prudential Regulation Authority (APRA), conducts a survey each year which helps in devising reports, based on the number of people, by age, gender and state of residence, with hospital insurance. On 25 July 2019, APRA released the Private health insurance annual coverage survey for December 2018.

According to the report, 2018 witnessed a decline in hospital treatment membership across younger age groups and increases across older age groups. Worryingly, the largest decline of 6.9 per cent was in the age bracket of 25 and 29, a population which should ideally be the most cautious and healthy. The group posted largest decline in the number of persons insured, down by 33,975 people. Moreover, there was an under-representation in this Group over all states and territories. The decrease in hospital membership across all jurisdictions, which resulted in a 0.6% decline nationally over the year, has been a worrisome figure for a potential budding economy like Australia. The fall in Insured persons, led to the national coverage falling from 45.6% in December 2017 to 44.6% in December 2018, a four-year continuous trend to stand at its lowest level since 2006.

Taking an example, Medibank Private Limited (ASX: MPL), a pioneer insurer of Australia announced in April that it had recorded the lowest average premium increase in 18 years and was reinforcing product differentiators via reforms.

Annual per cent change in number of people with hospital treatment insurance by age (Source: APRA)

Industry experts believe that the exit of Australians from the private health insurance appears to be a depraved instance for the economy. However, the opinion is divided as this report is looked upon as just a phase, which bears a potential to bounce back, in a good way. The gross margins and investment returns of related institutions are expected to be strong in the second half of FY19. Stock prices have been well above the anticipated averages, making it unjust to say that the situation might remain grim with capital return predictions.

Experts believe that these are the times wherein in-home care and likewise alternatives should be playing their part, which are less expensive and bear citizen’s trust as well.

In the light of this context, let us look at the two players from the healthcare sector, and acknowledge their stock performances on the Australian Securities Exchange:

Company Profile: A national private health insurer in Australia, Medibank Private Limited (ASX: MPL) was privatised in 2014 by the Government. With its registered office in Melbourne, the company offers private health insurance, travel insurance, life insurance, pet insurance and workplace health management, amongst likewise services. MPL was listed on the ASX in 2014. Also, MPL would be releasing its full year results for FY19 on 22 August 2019.

Macquarie Australia Conference: On 30 April 2019, the company presented at the Macquarie Australia Conference, stating that it had witnessed strong 1H19 results, with health insurance operating profit up by 1.5 per cent at $281.5 million and the Medibank Health operating profit was up by 38.5 per cent to $12.6 million. The Group NPAT was however, down by 15.4 per cent and stood at $207.7 million and the interim dividend was up by 3.6 per cent to 5.7 cps.

The company launched a new Member Choice Advantage dental network in January 2019. It would also consider acquiring a PHI business in the months to come, and believes that for sustainability to prevail, reform is a must. Till April 2019, 54 per cent of the company’s policy holders had transitioned to new products as part of the mandatory reform. As part of the optional reform- 150,000 customers had been given a discount of up to 10 per cent (from 1 April 2019).

On the outlook front, MPL expects the flat PHI market volumes to persist, and the brand volumes would stabilise by FY20. The dividend pay-out ratio would range between 70-80 per cent, and the future holds prospects for a couple of acquisitions as well.

The company is one of the firsts to adopt most of the PHI Reforms and had over 15,500 hospital policies covered with a $750 front end deductible, both internal migrations and new to nib sales. Almost 91,400 policies were on a gold tier product, building 17.6 per cent of total hospital policies. ~54,500 people were receiving an-age based discount (10 per cent) with a FY19 premium revenue impact of ~$1.3 million. 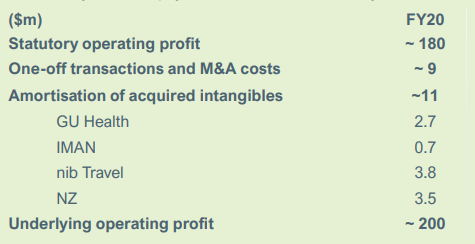