Aramco IPO gears-up further to beat the iconic Alibaba’s offering, and the IPO raised USD 25.6 billion as compared to the USD 25 billion raised by the Chinese e-commerce giant in 2014 at the Wall Street.

The state-owned oil mammoth hired banks as joint global coordinators for the planned initial offering of a 1.5 percent stake in the company. The company selected JPMorgan Chase & Co, Morgan Stanley, and Saudi Arabia's National Commercial Bank to guide it through the IPO.

Also Read: Aramco IPO To Be Larger Than Alibaba’s Iconic Offering? Or Oil Dynamics Could Play a Spoilsport?

Apart from that, the Saudi-based oil company also choose Bank of America Merrill Lync, Goldman Sachs Group Inc, Credit Suisse Group AG, and many other major banks to guide the company through the IPO proceedings. 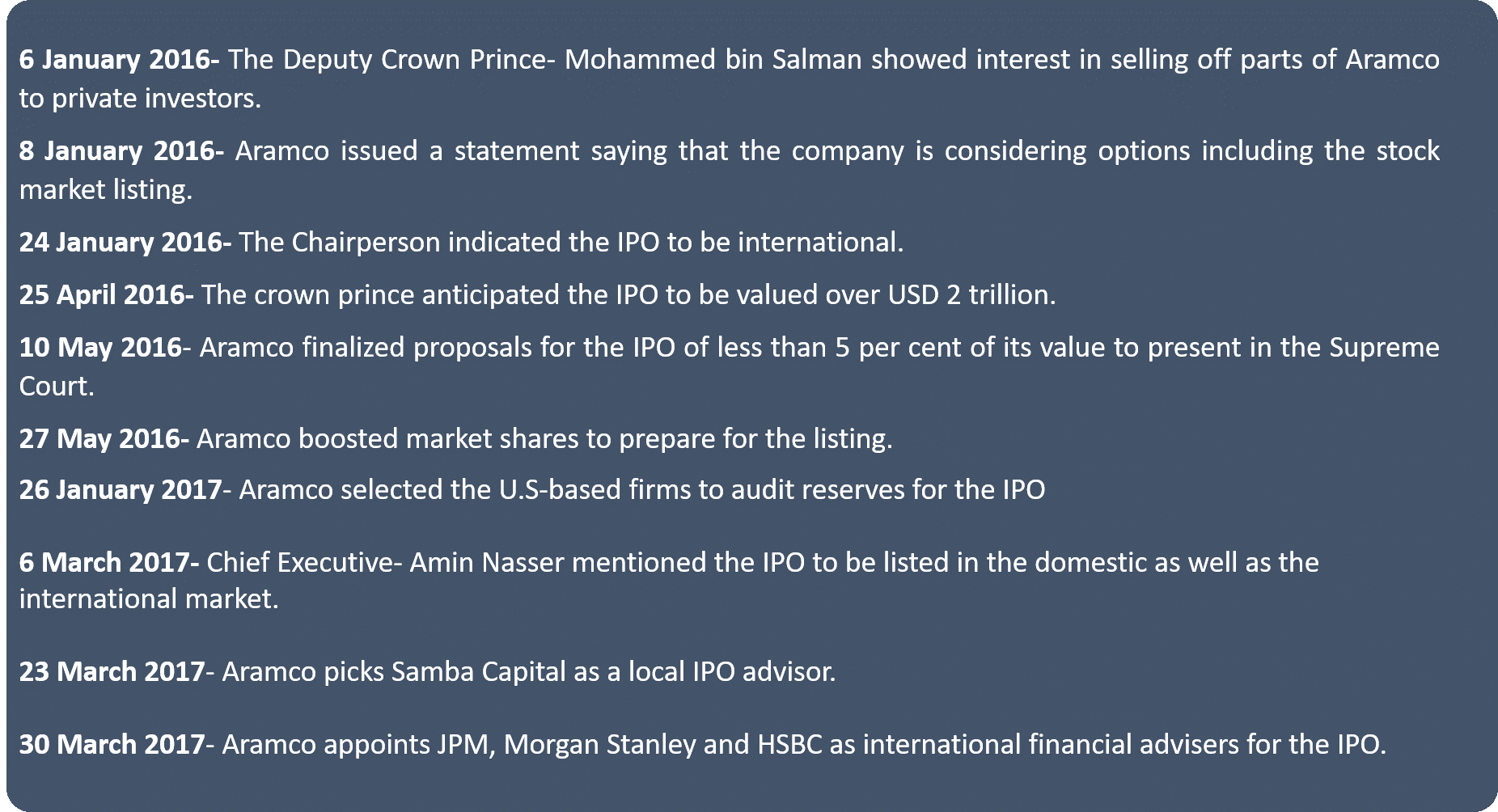 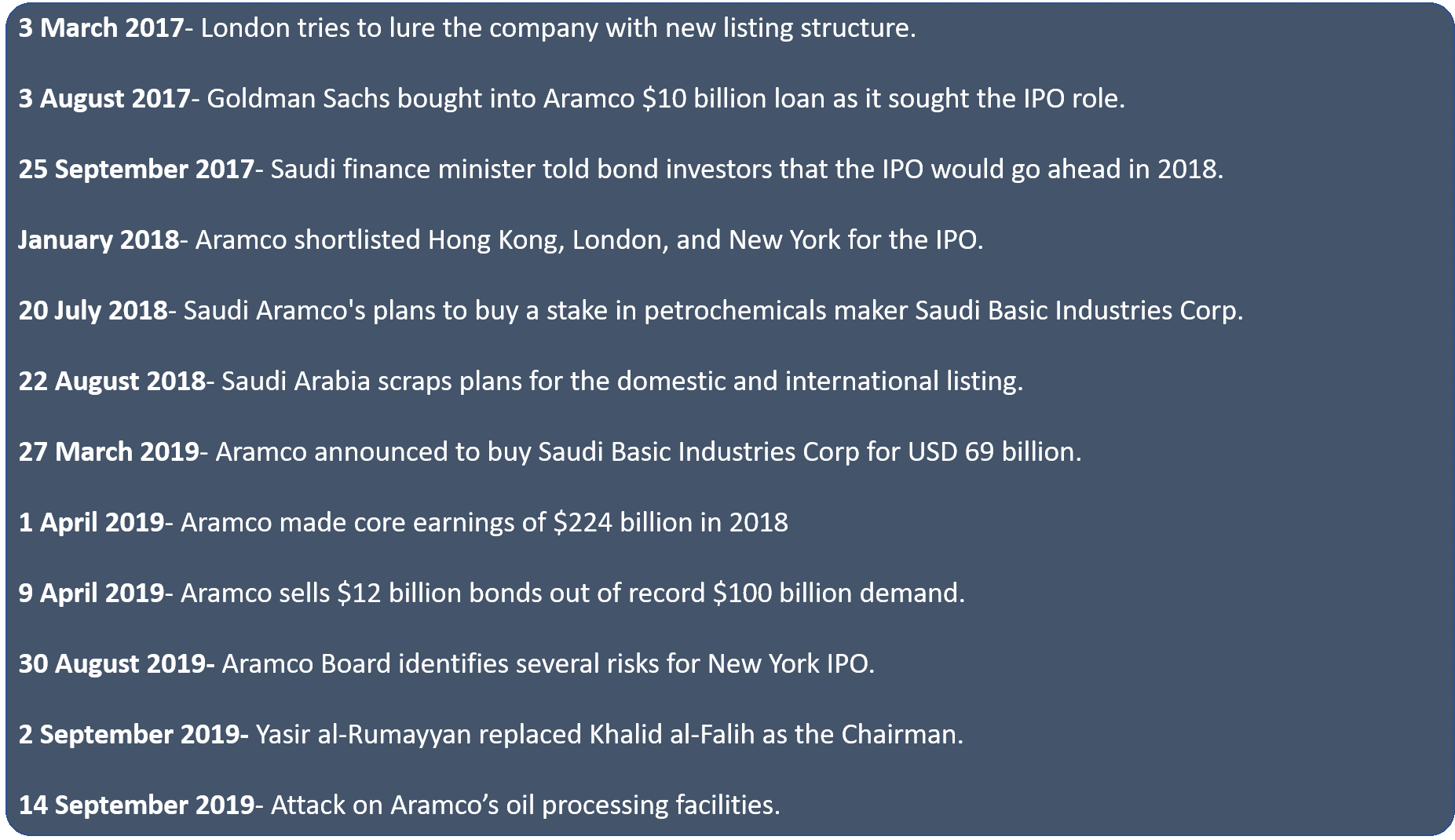 The Juggernaut is on Its Way!!

Saudi Aramco aims to achieve USD 2 trillion valuations during the initial public offering as was initially dictated by the royal oil minister, which is larger as compared to the annual GDP of Canada. Aramco is the world’s largest integrated oil and gas company, run by the kingdom.

At the current issue price range of SAR 30 to SAR 32, the IPO valuation, which has reached USD 25.6 billion, is expected to support the vision of the oil kingdom known as the ‘Saudi Vision 2030’, steered by the crown prince- Mohammad bin Salman.

The vision of the crown prince is to diversify the economy and reduce its dependence on the crude oil prices in the international market.

To Know More, Do Read: How Are OPEC Members Channelizing The Dependence On High Oil Prices?

Aramco produces one out of every eight oil barrels in the international market and holds five times larger liquid oil reserves as compared to the combined reserves of global behemoths- Exxon Mobil, Chevron, BP, Total, and Royal Dutch Shell.

In 2018, the company produced 13.6 million barrels of oil equivalent per day, which further included 10.3 million barrels per day of crude oil, and with a gross refinery capacity of 4.9 million barrels a day (2018), the oil behemoth also stands as the fourth-largest refiner across the globe. 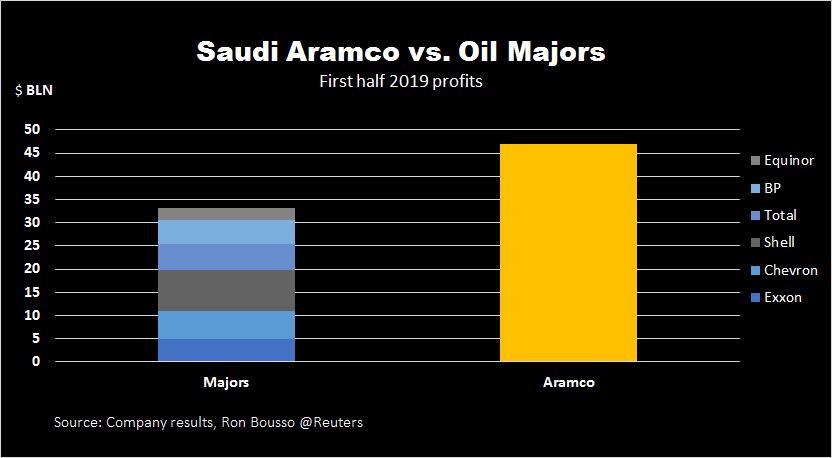 The first-half earnings of the company, which stood above USD 46.9 billion, was over USD 10 billion higher against the combined earnings of Equinor, BP, Total, Shel, Chevron, and Exxon.

Under the part of the USD 12 billion debuts international bond issuance, the company disclosed the financial statement for the first time, in which, for 1H 2019, Aramco net income stood USD 46.8 billion, down by approx. 11.70 percent against the net income of USD 53.0 billion in the previous corresponding period due to the weak oil prices in the international market.

The company paid over USD 46.39 billion in dividends during the first half of the year 2019, up by almost 45 percent against the previous corresponding period. Furthermore, the company intends to pay base dividend of $75 billion in 2020.

The profitability of the oil giant was largely affected by the drop in crude oil prices, which further reduced the average realised price for the first half of the year 2019.

The average realised oil prices of the company stood at USD 66 per barrel (for the first-half ended 30 June 2019), down by USD 3 per barrel as compared to the previous corresponding period.

The Gain for the Tadawul Exchange (Saudi Stock Exchange)

Under the Article-20 of the Capital Market Law, the Council of Ministers approved the formation of The Saudi Stock Exchange (Tadawul) on 19 March 2007. 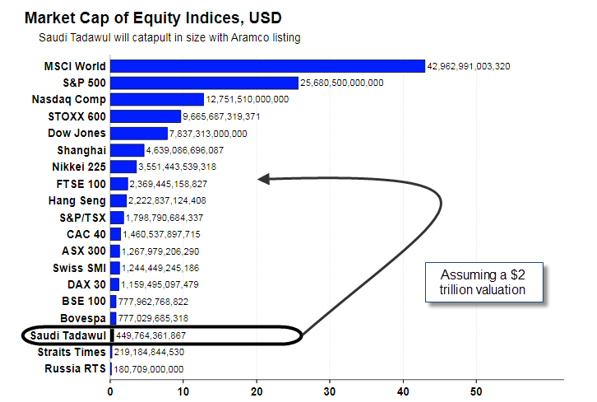 The market cap of the exchange is currently anticipated by the industry experts and independent forecasters such as Thomson Reuters to cross the market cap of FTSE 100 post the listing of the Aramco IPO.

In the Status quo, the stock exchange of the kingdom announced that the listing and trading of the oil giant would start on 11/12/2019G under the ticker 2222. The exchange fixed the daily price fluctuation limit of 10 per cent and mentioned that the opening auction would be extended for 30 minutes on the first day of trading.