APRA Wants To Increase The Capital Requirements For 4 Big Banks

For the effective functioning of an economy the services of Financial institutions are very important and no matter how careful these institutions are, there is always a possibility of failure. In events of the global financial crisis, the failures of Financial institutions can have broader impact on the financial system and it could lead to more severe social and economic consequences. To avoid these mishappenings, the Australian Government has asked Australian Prudential Regulation Authority (APRA) to implement a framework for Australian Banks in order to support the orderly resolution in the unlikely event of failure and protect the economy from any Financial shock.

APRA is the prudential regulator of the financial services industry and it has recently released a discussion paper on its website in which it has proposed changes to the application of the capital adequacy framework for authorized deposit-taking institutions (ADIs) to support orderly resolution in the unlikely event of failure which means that APRA wants to raise the amount of spare cash banks carry to withstand any future financial shock. According to the discussion paper, APRA wants the country’s four biggest banks to raise their available capital by four to five percentage points by the year 2023, from the current 14.5 percent. Commonwealth Bank of Australia, Westpac, ANZ and National Australia Bank are the four big banks of Australia and currently they hold combined market share of more than 80 percent.

As per the discussion paper of APRA, the extra capital will bring the Australian banks in line with new international standards developed by the Basel Committee on Banking Supervision and adopted by Canada and European Union countries. As per APRA’s Chairman Mr. Wayne Byers, the aim of these proposals and resolution planning more broadly is to ensure that the failure of a financial institution can be resolved in an orderly fashion. 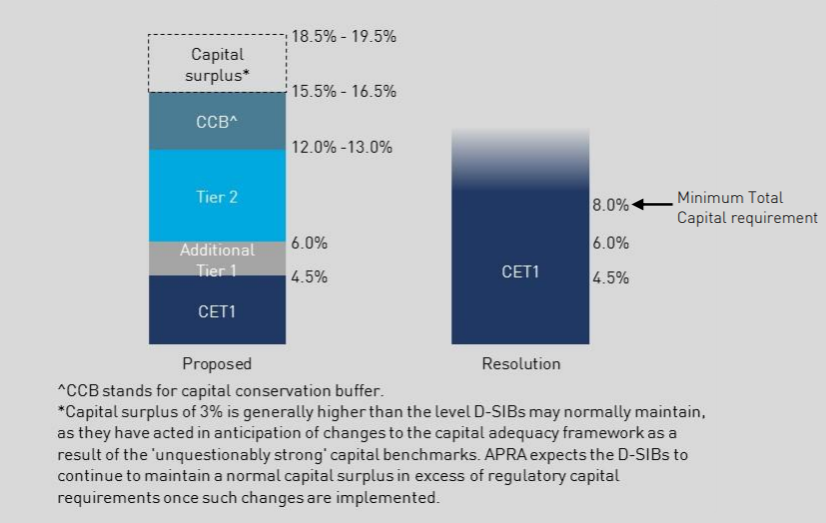 ANZ also announced that based on ANZ’s RWA of $391bn as at 30 September 2018, it will need an incremental increase in the total Capital requirement of approximately $16 billion to $20 billion, with an equivalent decrease in other senior funding. ANZ’s shares uplifted by 2.268 percent on ASX. Commonwealth Bank of Australia (ASX: CBA) announced that based on CBA’s RWA of $461 billion as at 30 September 2018, it requires an incremental increase of approximately $18 billion to $23 billion of Total Capital. Further, the bank is expecting that this requirement would result in a decrease in other forms of funding. CBA’s shares rose by 1.831 percent as on 8 November 2018.

The advice given by Kalkine Pty Ltd and provided on this website is general information only and it does not take into account your investment objectives, financial situation or needs. You should therefore consider whether the advice is appropriate to your investment objectives, financial situation and needs before acting upon it. You should seek advice from a financial adviser, stockbroker or other professional (including taxation and legal advice) as necessary before acting on any advice. Not all investments are appropriate for all people. Kalkinemedia.com and associated websites are published by Kalkine Pty Ltd ABN 34 154 808 312 (Australian Financial Services License Number 425376). website), employees and/or associates of Kalkine Pty Ltd do not hold positions in any of the stocks covered on the website. These stocks can change any time and readers of the reports should not consider these stocks as advice or recommendations.