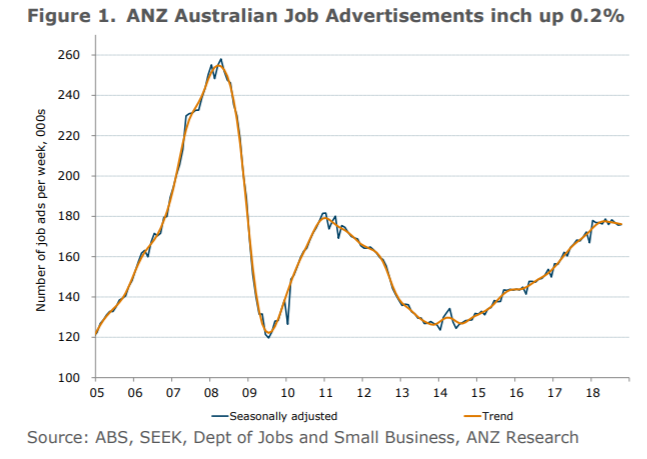 ANZ’s head of Australian Economics Mr. David Plank said the slowdown in employment growth in 2018 has been broadly consistent with the move in ANZ Job Ads, however in recent months employment growth has outperformed the signal from job ads. The unemployment rate has also dropped more sharply than ANZ Job Ads would imply. Other indicators of the labour market, such as the ABS Job Vacancy series, are sending a more positive signal. As per the Labour Market Indicator a further decline in the unemployment rate is more likely to happen.

Federal Treasurer Mr. Josh Frydenberg said the decrease in the unemployment rate is something to celebrate and the increase in the full-time employment by 20,000 is consistent with the momentum that they are observing in the economy and many economists believe that the fall in the unemployment rate and the continuous growth in total hours worked is going to benefit the consumers through higher aggregate household income, as well as boosting consumer sentiment.

Further, due to the healthy increase in the full-time jobs, the labor conditions are looking solid in Australia and it is anticipated that the wage pressures will pick up gradually.

At the moment, this trend is to be watched out for while quarterly wage price data and monthly jobs print data will be out sometime this month.

The advice given by Kalkine Pty Ltd and provided on this website is general information only and it does not take into account your investment objectives, financial situation or needs. You should therefore consider whether the advice is appropriate to your investment objectives, financial situation and needs before acting upon it. You should seek advice from a financial adviser, stockbroker or other professional (including taxation and legal advice) as necessary before acting on any advice. Not all investments are appropriate for all people. Kalkinemedia.com and associated websites are published by Kalkine Pty Ltd ABN 34 154 808 312 (Australian Financial Services License Number 425376). website), employees and/or associates of Kalkine Pty Ltd do not hold positions in any of the stocks covered on the website. These stocks can change any time and readers of the reports should not consider these stocks as advice or recommendations.