Gold as a safe haven asset has been the parameter to gauge the global uncertainty.

Subsequently, the index price started to fall and reached A$6185.674 on 13 December 2019, perhaps driven by intermittent optimism towards trade deal post-Chinese efforts for policing intellectual property (IP) theft with stricter penalties and investment.

Come 2020, the price rose again amidst uncertain outcome of recently signed Phase 1 US-China deal, global concern of Coronavirus epidemic, while the nation grapples with bushfire and drought impact. The XGD price on 7 February 2020 was A$7029.536.

The gold price variation with global uncertainty is easily witnessed by comparing with a copper-the universal economic indicator which depicted relation inversely, as shown below.

With the gold reaching new highs in 2020, it is quintessential to analyse the performance of the gold stocks on ASX. For the same, stocks with a market cap of above A$200 million to A$10 billion are chosen : RMS, SAR, EVN and TBR.

The companies mentioned above, the return of share price followed the same trend as gold price, as shown below. 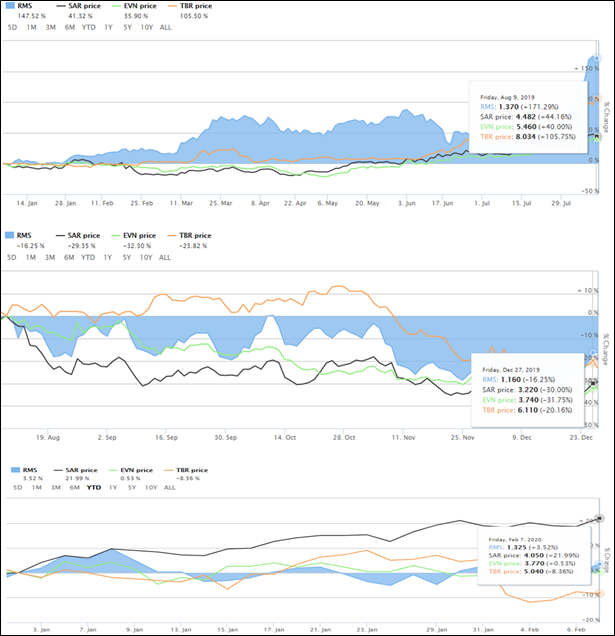 The gold production of 170.890 koz at AISC A$1,069/oz is achieved during December 2019 quarter. And it is essential to mention that the Company has reached its 50% guidance and expected to attain the remaining gold production easily in the next half of the year. The guidance for FY20 remains unchanged with ~725koz at AISC of ~A$920-990/oz.

The cash and gold equivalent at the end of the quarter was A$87.7 million after payment of dividend A$6.6 million and capital, development and exploration expenditure of A$29.5 million.

The surge in FY20 guidance of more than 100% is expected to be coming from Marda mine and ramp-up of production (coming from Eridanus, Vegas, Stellar, Brown Hill, Hill 60 UG, Shannon UG).

In the EKJV agreement, the Company holds a 36.75% interest while remaining is owned by Rand Mining Ltd (ASX: RND) and Northern Star Resources Ltd (ASX: NST) with an ownership interest of 12.25% and 51%, respectively.

During the December quarter, EKJV processed 223,191 tonnes of ores at Kanowna Plant and 58,250 tonnes at the Greenfields Mill while 30,267 tonnes of ores from Rand and Tribune (R&T) treated at the Lakewood Mill.

Also, recently the Company announced EKJV exploration report in which only one diamond hole out of seven targeting Falcon returned significant gold mineralisation. Therefore, the Company revised the mining plan and put Raleigh UG mine on care and maintenance in April 2020 to conduct a detailed assessment of the potential, review the seismic events to recommence mining.

The share price witnessed a tremendous fall by 16% from A$5.8 on 31 January to A$4.85 on 4 February 2020 in the period of quarterly, EKJV exploration and production announcements.