All You Need To Know About The Fund Manager BLA

On Thursday 23 May 2019, BLA announced to the exchange that its Director Ms Cheryl Edwardes has tender her resignation, effective from 21 May 2019.

On 20 May 2019, the shares of BLA were under trading halt following the appointment of receivers and managers and voluntary administrators to BLA. Further, the company announced the appointment of Mark Korda and Jarrod Villani of investment and advisory firm KordaMentha as Receivers and Managers of the Company. On the other hand, Nigel Markey and Bradley Hellen of Pilot Partners were appointed as Voluntary Administrators of the Company.

After the extensive discussions between Blue Sky Alternative Investments Limited and its financier Oaktree Capital Management, L.P, Oaktree have imposed their rights under the convertible note facility entered into by Blue Sky. These appointments were made following the break of a covenant at 31 March 2019 under the convertible note facility. In order to maintain the investment teams, clients and steady the ops and capital structure of the business, Oaktree believes that it was important to make these appointments.

Further, a market release was provided by the directors of Blue Sky Alternatives Access Fund Limited (ASX: BAF) after the appointment of voluntary administrators and receivers and managers to BLA. BAF highlighted that on 20 May 2019 morning, BAF received a communication from BSAAF Management Pty Limited (BSAAF) that it remains solvent in the opinion of the directors of BSAAF.

On 9 May 2019, BLA highlighted that under the Oaktree facility at 31 December 2018, BLA was within all relevant lending covenant tests. However, based on the restructuring measures that is continuing through the financial year 2019, the Board predicts that covenants might not be achieved as at 31 March 2019. Under the Oaktree facility, financial covenants such as EBITDA, minimum net tangible assets, minimum recurring cash, minimum cash balance along with minimum annual capex are tested on a quarterly basis. For the month of March 2019, BLA finalized its management accounts and also obtained guidance on the application/interpretation of the agreement. Also, the external advisers were involved for reviewing the calculations of BLA to examine the compliance with the financial covenants. The review confirmed that BLA as at 31 March 2019 calculation date was in breach of the minimum recurring cash EBITDA covenant. 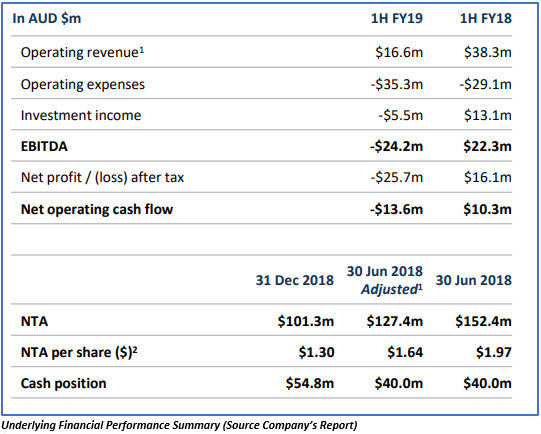 Post the announcement of BLA on 9 May 2019, the BAF directors in the last week took steps to secure control of the bank account holding in excess of $29,000,000. A stop was placed on the account and manager account signatories were replaced with the three BAF directors.

Based on the uncertain financial and control situation of BLA, the directors of BAF believes that BSAAF should follow its previous commitment of entering into a MoU with Wilson Asset Management (International) Ltd so that the shareholders of BAF gets an opportunity to vote on that proposal.

The shares of BLA traded last on 17 May 2019 with the closing price A$0.185. BLA holds a market capitalization of A$14.38 million and approximately 77.71 million outstanding shares.