All you need to know about Base Resources, Hot Chili and Grange Resources- Right Here!

Growth in infrastructure advancement and automotive production are propelling progress in the metals and mining sector. Companies are spending more in R&D and resorting to technological advances aimed at different levels of business to boost productivity of operations, maintain growth and cut down on costs. The continuing transformation in green technologies, supported by the exponential development of innovative electric vehicles and investment in solar photovoltaic energy, are the key positives.

Australia is one of the world's leading producers and exporters of coal. Australia manufactured approximately 510 million tonnes (Mt) of coal in CY17-18. Consequently, around 380 Mt (75%) was exported as compared to 55% in CY90-91.

Here, we would be discussing three metals and mining stocks - Base Resources Limited (ASX: BSE), Hot Chili (ASX: HCH) and Grange Resources (ASX: GRR). Let us dig into details for each of these stocks.

Base Resources is engaged in the expansion, manufacture, production and sale of mineral sands which incorporates rutile, ilmenite and zircon.

The company recently issued the estimates of its initial Ranobe Ore Reserves, acquired in January 2018 and forms the base of its Toliara Project, in Madagascar. Base Resources is presently developing the Definitive Feasibility Study (DFS) which is expected to be finalized by the end of 2019.

On 27 November 2019, Base Resources reported steady production including 1.1% of rutile, 74% of ilmenite, 0.9% of Leucoxene and 5.9% of zircon. The Ranobe Ore Reserves projects thirty-three-year initial mine life, which is in line with the JORC Code forecast.

In the FY19 results’ release, the company unveiled priorities for FY20- 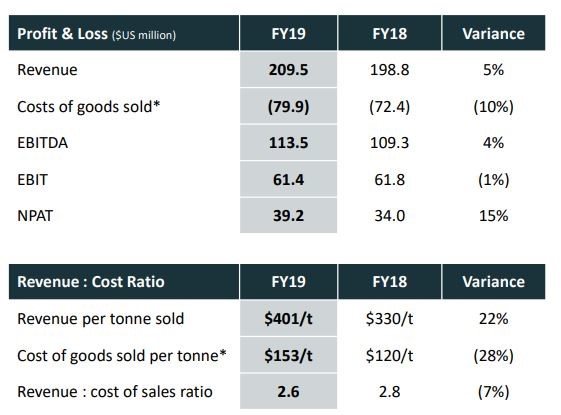 Australia’s copper maker, Hot Chili has an enhanced Chilean coastal an array of portfolio with its registered office located in Applecross. For this project, the company had aligned with Minera del Pacíico S.A, which is Chili’s largest iron ore miner.

In February 2019, HCH bought a 100 percent profit in Cortadera (copper-gold project), located close to its Productora and El Fuego copper projects. Further, in May this year, the company commenced the drilling campaign at Cortadera, which is positive.

On 26th November 2019, Hot Chili made an announcement pertaining to the Cortadera copper-gold porphyry discovery in Chile. The newest results of 2019 confirm that the Diamond drill hole had confirmed a large northern extension to the Main Porphyry at Cortadera.

On the same lines, the company announced on 11th November 2019 that the Diamond drill hole had ensured a large northern extension to the Main Porphyry at Cortadera. The CRP0020D Diamond drill hole recorded an exceptional 860m width and focused at testing large extensions to bulk high-grade copper and gold mineralization, which was being extended to a depth of 1,000m. The RC drill testing of the upper near surface had confirmed up-dip extensions to deeper sulphide mineralization.

The latest updates from a surface geochemistry program and current comprehensive mapping have given robust support to the company to bring-ahead first drilling across two huge evolution goals discovered close to Cortadera North and Cuerpo 3 North.

The company expects to unveil final assay results for the third drill hole from 50m to 330m diamond hole CRP0018D in the coming days.

On 15 November 2019, the company notified that it had issued 3,986,527 shares on conversion of 1,319 Convertible Notes. The price of the convertible note and accrued interest was $0.03333 per share as per, subject to regulatory approval.

On the same date, 11,111,112 under the tranche 2 were issued. The placement procedure took place to fund the Cortadera project, continuing EED etc.

Mining and exploration group, Grange Resources Limited is involved with the activities related to the iron ore and gold exploration and has presence in both Malaysian and Australian regions. Key mines and plant include Savage River iron ore mine and Port Latta pellet plant.

On 24th October 2019, the company issued its quarterly report for the period ended 30 September 2019. The company had started appropriate maintenance work on time and aimed at reducing the west wall, which offers the subsequent area of access to the Main Ore Zone in the near-term.

In September quarter 2019, total concentrate produced accounted for 563,599 tonnes, while weight recovery reached 40.7%. The Pellet production which was 402kt in the June 2019 quarter grew to 550kt during the same period.

CLICK HERE FOR YOUR FREE REPORT!
Tags:
Mining metals and mining b