A sneak-peek on three players from Metals and Mining Sector - AWC, SGM and BSL

The Australian Stock Exchange comprise of more than 600 metals and mining companies, which are listed on it. On 26th Aug 2019, the benchmark index last traded at 6440.1 points with a fall of 1.3% compared to its last close. Besides, the S&P/ASX 300 Metals and Mining (Industry), by the closure of the trading session was at 4,134.2 with a fall of 0.3% from the last close.

Let’s have a look at the three players from metals and mining sector.

Alumina Limited (ASX: AWC) is a resource entity in the Australian region. It exclusively concentrates on alumina and owns forty percent of the western side of the globe’s biggest alumina sector, AWAC which has been acknowledged as the leader in the market.

Recently, the company through a release announced that Allan Gray Australia Pty Ltd and its related bodies corporate as investment manager for the funds or investment has made a change towards the substantial holding in AWC, with the current voting power of 6.95 percent as compared to the previous voting power of 5.93% on 20th August 2019.

In another update, the company announced that BlackRock Group (ASX: BKT) and its subsidiaries have become a substantial holder in the company with the voting power of 5.00%, effective 19th Aug 2019.

A look at First-Half’s Performance

On 23 August 2019, AWC declared the interim report closed on 30 June 2019. The company stated that the tight Western world alumina market conditions of last year have waned in the 1H FY19 period since reduced supply came back on stream and fresh refineries have increased.

The following picture provides an idea of bauxite production for 1H FY19:

For FY19, the company is expecting production of Alumina of 12.6 mt and sales of bauxite (third party) of 6.2 mt. It anticipates sustaining capital expenditure and growth capex amounting to $155 million and $55 million. The company is projecting the production of aluminum of around 165,000 tons and SGA shipments expected to be based on alumina price indices or spot of around 94% for the year.

Recently, the company via a release declared its results for FY19 wherein, it communicated about the operational and financial performance for the FY19. The company stated that it is navigating significant market challenges like low turkish demand and volatile purchasing behaviour. There was a decline in the pricing of ferrous and non-ferrous compressing margins. It added that the short-term ferrous price volatility has made for challenging trading conditions.

With respect to Employee Health & Safety, it added that the safety remains the prime concern for its employees and community. The company delivered sales revenue amounting to A$6,640.0 million in FY19 as compared to A$6,448.0 million, reflecting a rise of 3.0% on pcp but witnessed a fall of 2.5% on constant currency basis. 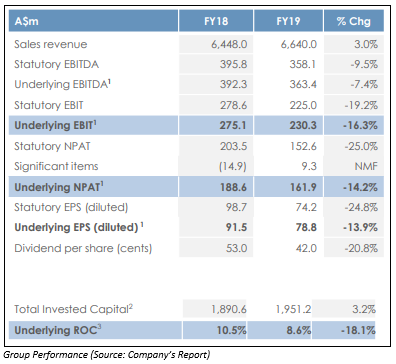 SGM further stated that the underlying EBIT amounted to -$59.4 million, which witnessed a rise of 10.3% over previous corresponding, mainly because of reduced employee benefits expense. With respect to Sims Municipal Recycling, the underlying EBIT stood at $7.4 million, comprising of contract amendment to adjust for the fall witnessed in price of the paper.

The net cash balance of the company stood at $348 million, which continues to support growth initiatives and it anticipates total capital expenditure of $205 million for FY20, which excludes potential bolt-on acquisitions. It further added that the resulting depreciation from current assets and new capital expenditure is anticipated to be around $135 million for financial year 2020.

Sims Metal Management Limited has declared a final dividend amounting to 19.0 cps, 100% franked for FY19. It brought the total dividend for FY19 to 42.0 cents per share, reflecting a 53% underlying payout.

Moving to the stock performance, the stock of Sims Metal Management Limited was trading at A$10.285 per share (at AEST 3:49 PM), with a fall of 1.201% during the trading session of 26th August 2019. In the time frame of three months and six months, it witnessed a positive return of 7.88 percent and -11.48 percent, respectively. When it comes to the time period of one month, SGM provided a return of -1.14%.

Going forward, on 19 August 2019, the company released the results for the FY19 period closed on 30 June 2019. BSL stated that safety is its priority, considering that the company has released five-year Health, Safety and Environment strategy in FY2019, having greater focus on injury severity and the care taken for the return of its employees to meaningful work. The strategy also focuses on building a strong culture of learning, trust and inclusion. Recently, the company has inked power purchase agreement.

The company delivered underlying EBIT amounting to $1,348 million in FY19, reflecting a rise of $79 million from FY18 and reported free cash flow of $1,304 million with a rise of $573 million on pcp.

The company posted return on invested capital of 19.5% in FY19, it added that ROIC is the primary measure of performance throughout all business units, and the Group. It is a key discipline for performance management, project assessment and executive incentives.

The company’s results are being supported by a solid balance sheet and very efficient capital investment ethos comprising of one that balances yearly shareholder returns and long duration profitable growth. The cash balance of BSL stood at $692.7 million, out of which around $150 million was related to timing benefits in working capital. The company would now be aiming towards a revised capital structure of group net debt of approximately zero, as against its earlier mentioned objective of net cash in the ambit of $200 million - $400 million.

In FY19, the company has distributed at least 50 percent of free cash flow to that shareholders, which includes the final dividend of 8 cps and a rise of $250 million for buy-back, which was announced in June 2019 for 1H FY20 period. 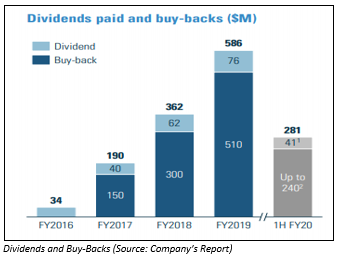 Moving to the stock performance, the stock of BlueScope Steel Limited last traded at A$12.33 per share, with a decline of 1.753 percent on 26the August 2019. In the time frame of three months and six months duration, it gave a return of 6.09% percent and -4.42 percent, respectively.

CLICK HERE FOR YOUR FREE REPORT!
Tags:
Mining ASX: SGM ASX: BSL ASX: AWC
All pictures are copyright to their respective owner(s).Kalkinemedia.com does not claim ownership of any of the pictures displayed on this website unless stated otherwise. Some of the images used on this website are taken from the web and are believed to be in public domain. We have used reasonable efforts to accredit the source (public domain/CC0 status) to where it was found and indicated it below the image.