The video game industry has advanced a lot since the release of arcade game, Pong in November 1972. In the same year, the video games were introduced to the market when the early video game console, the Magnavox Odyssey was launched. This industry is involved in marketing, development and monetization of video games.

The electronic gaming has developed with the increasing demand of mobile games. A research undertaken in 2018 forecasted the global games market to reach above $180.1 billion in 2021 from $137.9 billion in 2018. In the research report, the mobile games were also expected to grow to $106.4 billion (59 per cent of total) by 2021.

Apart from being an appealing entertainment to kids, the video game is also a financial juggernaut. The gaming stocks have become a lucrative segment for investors with a transition of the electronic gaming industry into a multi-billion-dollar global phenomenon.

A premier trade event for the video game industry, Electronic Entertainment Expo (E3) is scheduled to be held at the Los Angeles Convention Center (LACC) from June 11-13, 2019. It is an opportunity for the companies in the video game industry to show off their latest and greatest plans and products. It is a big expo for video game companies that attracted over 4.4 million online viewers, around 70,000 convention goers and roughly 15 million tweets last year.

Below are some of the ASX stocks that offer exposure to gaming landscape:

Let us study more about some of the above gaming stocks:

Leading eSports and Casual gaming tournament company, Emerge Gaming Limited (ASX: EM1) is headquartered in Australia. The company is changing the eSports gaming landscape with its online eSports and casual gaming tournament platform and lifestyle hub “Arcade X”. The platform gives a unique and mature gaming experience, allowing players to play hundreds of gaming titles against each other via their mobile, console or PC. 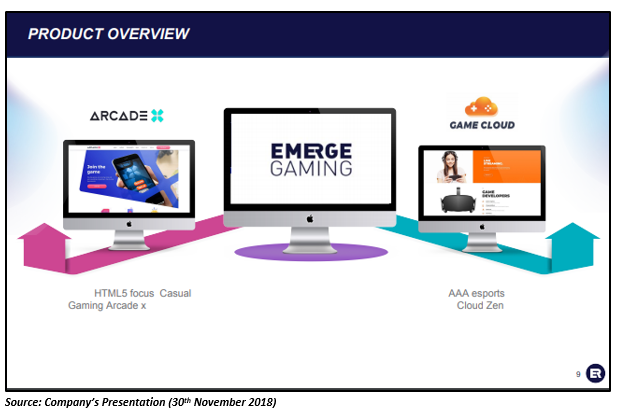 Operational Details: Recently, the company announced a partnership with America-based Digital Circus Media LLC to launch its products throughout North America. The company has also initiated a planning phase of a North American program with Cloudzen Pte Ltd and strategic partners in the United States and Canada.

On 12th March 2019, Emerge Gaming announced its commercial rollout strategy to launch the gaming platform, Arcade X in Australia and rest of the tier 1 countries. The company’s strategy included a national advertising roadshow, the appointment of Arcade X Strategic Marketing Consultant and a trade marketing collateral for marketing to major Australian brands including a media kit. Leading multinational brand agency, Meerkats was engaged by the company to refine the advertising environment within the gaming platform, Arcade X.

The company also partnered with an African based mobile video content provider, Netsport Media to distribute Arcade X across key regions in Africa and the Middle East.

In order to support its key offerings – the launch of Arcade X, the rollout of the VAS model across Africa and accelerate the rollout of GameCloud – the company raised $1.8 million through Placement. Emerge Gaming reported a cash balance of $1.95 million at the end of the quarter ending 31st March 2019. In order to maintain its operations, the company is targeting a cash outflow of ~$140,000 per month.

Stock performance: The company had requested for the suspension of its securities on 6 June 2019, pending the release of an announcement in relation to the Arcade X Platform. The stock of the company last traded on 3rd June 2019 at AUD 0.022. The stock has performed exceptionally well in the past, generating a YTD return of 214.29 per cent. The stock delivered a substantial return of 214.29 per cent, 22.22 per cent and 4.76 per cent in the last six months, three months and one month, respectively.

SportsHero Limited (ASX: SHO) is a company headquartered in Australia that has developed an intelligent, engaging sports prediction platform to provide a dynamic immersive social experience. The gamified social sports prediction platform is coupled with both monetary and other prizes. People can interact, predict and compete on major sports both virtually and in real-time on the platform. 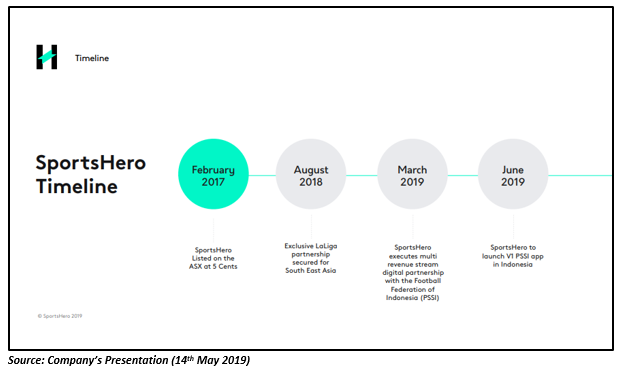 Operational Details: On 25th March 2019, the company announced that it has entered into an exclusive deal with one of the largest sports federations in the world, Football Association of Indonesia (PSSI) for the development of a white-label exclusive digital platform. In a recent announcement, the company informed that its platform is ready for submission to the Google Play and Apple App Store following final beta testing.

Early in March, the company informed the market that a Joint Venture Agreement has been executed by the firm with Cross Bet Holdings Pty Ltd, securing access to a Sports Bookmaker Licence to facilitate the Australian launch of a pay-to-play sports prediction platform.

Stock Performance: The company’s stock closed lower on the Australian Securities Exchange (ASX) at AUD 0.068 (as on 6th June 2019), down by 2.85 per cent relative to the last closed price. Around 13,263 number of company’s stocks were in trade. The stock has not performed well in the past as it has generated a negative return on a YTD basis of 35.24 per cent. However, in the last one month, the performance of the stock slightly improved and it delivered a return of 1.49 per cent.

Developer and publisher of a wide range of original games, Animoca Brands Corporation Limited (ASX: AB1) serves as a global or regional publisher for selected games developed by third parties. The company leverages its unique capabilities to develop and publish a huge portfolio of mobile products. It is based in Argentina, Hong Kong, Canada and Finland. 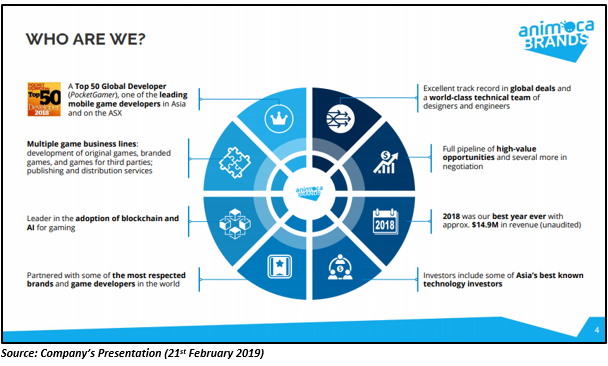 Operational Details: In a recent announcement, the company informed that it has partnered with iCandy Interactive Limited and Guangzhou Aijuyou Information Technology Co. Ltd. (9Games) for the expansion of iCandy’s mobile game ‘Groove Planet’ into Mainland China. Animoca Brands was given the responsibility to license the game and offer the required technical support along with iCandy (ASX: ICI). It was decided that Animoca Brands will receive a proportion of the revenue collected by iCandy.

On 23rd May 2019, the company also declared that its wholly owned subsidiary TSB Gaming Ltd. has raised A$3.6 million, consisting of 40 per cent in cash and 60 per cent in Bitcoin cryptocurrency. The amount was raised to fund the development of the expected blockchain version of The Sandbox.

Stock Performance: The company’s stock last traded at AUD 0.150 on 10th May 2019 following which, the company announced the voluntary suspension of its securities on 14th May 2019, pending consideration by ASX of the terms of a capital raise by one of AB1’s subsidiaries. The stock has performed well in the past, delivering a YTD return of 50 per cent. In the last five years, the stock has generated a huge long-term return of 272.78 per cent. However, it has delivered a negative return of 45.87 per cent since it began trading on the ASX. 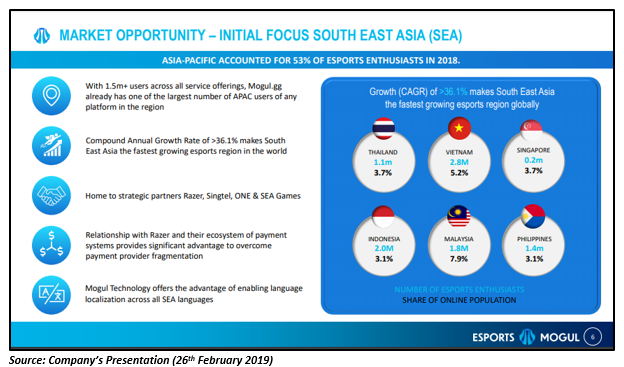 Operational Details: Recently, the company has changed its name from Esports Mogul Asia Pacific Limited to Esports Mogul Limited. The company has also appointed a new Chief Marketing Officer, Mark Warburton who has an extensive 20 years’ experience in the video games and esports industries.

In an announcement on ASX, the company declared that it has raised A$3.1m in an oversubscribed placement at A$1.0c per share to support existing and new revenue generating activities and further international expansion.

In May this year, Europe’s largest esports teams, Alliance and Mogul entered into an industry-first deal under which Mogul was to offer its esports tournament platform to Alliance to assist it in establishing an annual large-scale event series. Mogul was also selected as the exclusive platform provider for Girl Gamer Sydney Festival, run by the Australian Esports League.