A Look at Westpac Banking Corporation

The shares of Westpac Banking Corporation (ASX: WBC) reversed its five-day losing streak in the market at the close on 6 November 2019.

This might be due to the fact that RBA decided to take a pause in slashing cash rate to further lower levels.

On 4 November 2019, the bank reported its full-year results for the period ended 30 September 2019. As such, the results were adversely impacted by the customer remediation costs, wealth business reset, exit from financial planning business, higher insurance claims, and regulatory changes in accounting. 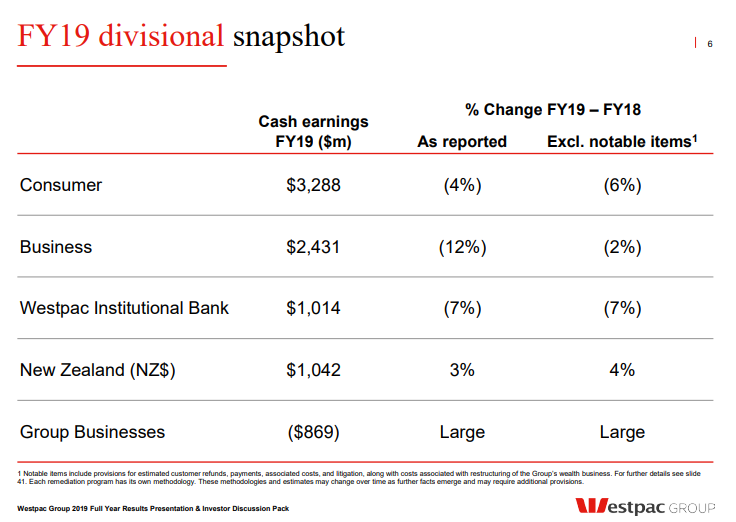 Despite all these headwinds, the bank was able to report a statutory net profit of $6,784 million which is indeed an accomplishment. Although, the dividend declared by the bank was lower, which was speculated by the brokerages.

In the past seven years, FY 2019 total dividends of $1.74 per share are lower than all the dividends declared by the bank except in the year FY 2012, at $1.66 per share. Following three consecutive years of flat dividends, the resilience of the bank broke this time around with a decrease of 14 cents per share in total dividends.

What is the view of the Board?

In the Chairman’s report, Mr Lindsay Maxstead said that the ramifications of Royal Commission into Misconduct in the Banking, Superannuation and Financial Services Industry are industry-wide, and the bank has also faced issues with the outcome of Royal Commission.

On dividends, he said that there had been numerous reasons to cut the dividends, and the Board is committed to making decisions that are in the best long-term interests of the company. The Board looks to maintain a pay-out ratio that is sustainable, currently around 70-75%.

Meanwhile, the Bank Levy has weighed in on the earnings and return to the shareholders, having an impact of 8 cents per share this year.

The bank has integrated its superannuation, insurance, investments, private wealth businesses and platforms and into the Consumer and Business divisions. Further, he said that the environment for banks remains challenging with slowing economic growth, and lower-interest rates.

In addition, the regulators across ANZ have been initiating new enquiries including, home loan pricing, remuneration, and capital/ risk weighted asset methodologies across the sector. He expects a challenging next year in economic, competitive, legal, reputational, and regulatory perspective.

Paying Dividends Instead of Interest

Concurrently, the bank has announced a capital raising of $2.5 billion, out of which $2 billion was completed as a part of a fully underwritten institutional share placement on 5 November 2019. Further, the new shares issued under the offers would not be entitled to the final dividend announced by the bank.

The placement was carried at a fixed price of $25.32 per new share to issued approx. 79 million new shares, equating to approx. 2.3% of the bank’ existing issued capital. In addition, the bank is undertaking a share purchase plan to eligible Westpac shareholders.

The non-underwritten SPP is targeting to raise $500 million at similar issue price to the placement, and it is available to the shareholders in records on 1 November 2019 who have an address in Australia or New Zealand. The eligible shareholders have an option to subscribe for shares worth $30k without brokerage or transaction cost.

More importantly, the bank has chosen equity-capital financing rather than debt financing. Although, the new shares issued under the plans would increase the total number of shares outstanding in the market.

However, the fresh capital would not carry an interest-payment unlike bonds or hybrids, allowing the bank to cut on these costs, and possibly return those savings to the shareholders as a part of dividends.

As we have discussed earlier, there have been more reasons pointing out to the downside-risks in the full-year results of major banks. The net profit of the bank has been reduced by $1,130 million due to provisions for refunds to customers, litigation and associated costs, payments, along with the restructuring of the wealth business.

Further, the bank reported a decrease of $1,032 million in net wealth management and insurance income compared to FY 2018 due to customer remediation and associated costs, higher general insurance claims, lower wealth management income, among others.

The banks also reported a decrease of $16 million in trading income compared to the previous year due to change in methodology for derivative valuations, partially offset by higher non-customer income.

In addition, the operating expenses increased by $540 million or 6% compared to the FY 2018 due to a $349 million increase in provisions for customer remediation costs, higher technology expenses, increasing expenses in regulatory, compliance, and investment. However, there was a benefit of $158 million through the exit of Hastings business.

In terms of asset quality, the stressed exposures as a percentage of total committed exposures were at 1.20%, up by 12 basis points over the year. Besides, the fully franked final dividend of $0.80 per share is payable on 20 December 2019 to the shareholders in records on 13 November 2019.