A Look At The History Of The Aussie Share Market

The share market of Australia is amongst the largest and most high-profile financial marketplaces. According to a study conducted by the Reserve Bank of Australia in April 2019, the sum total of the capitalisation of companies listed in the country amounts to almost $2 trillion, with approximately $5 billion shares traded on a daily basis.

The first ever regional market in Australia was established in Melbourne way back in 1861, taking the Australian stock market’s existence back in time over 150 years. The additional regional exchanges followed suit, they were established in Sydney, Hobart, Brisbane, Adelaide and Perth. These traded independently until 1937 when the AASE was formed, along with uniformed listing and commission rules.

The below representation is a summarised version of few of the major incidents, rather milestones, that occurred in the past century, pertaining to the Australian share market- 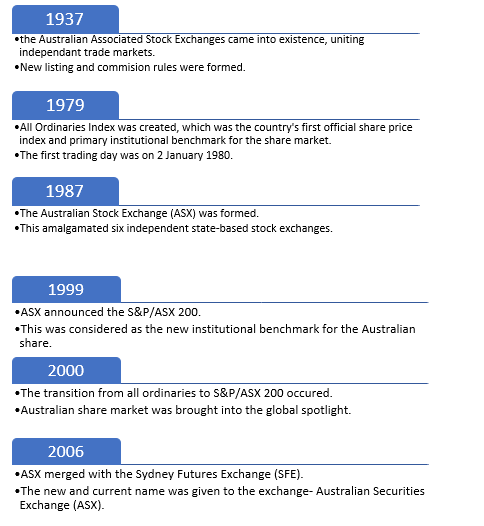 Presently, Australia is relatively open, trade-exposed economy. This is an indication that any change in a foreign country’s demand for Aussie goods and services would have a direct impact on the Australian economy. The equity market is amongst the significant sources of funding for the Australian based firms and comprises of a large share of households' retirement savings as well. Many of the huge well-known companies, resource companies and banks are listed on the ASX and they are accountable for a huge chunk of the Aussie output and employment. 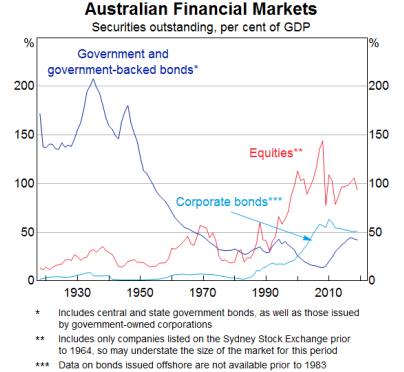 A market is truly assessed and considered attractive if it generates good and satisfying shareholder returns. As per RBA report, the share prices have increased by a geometric average of approximately 6 % p.a. over the last 100 years (2% inflation adjusted). Even with phases of over and underperformance, the general trend depicts that the different industrial segments have performed quite similarly. An event of disbalance can be cited from the Great depression, post which the banking sector had tumbled for a much longer period. 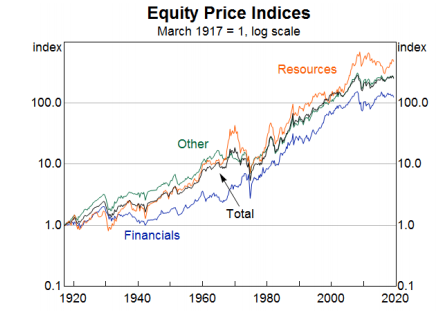 Coming to dividends, the Australian stocks are known for their high dividend yields. This is because the dividends in the Australian share market are higher than many other countries given their tax treatment. Post the introduction of franking credits, the ratios diverge; dividend payments in the country have remained extremely high.

Based on a market study and considering the returns and dividends in the Australian market, it can be inferred that the total nominal return on equities has been approximately 10 per cent per year over the past 100 year. Post inflation, this rate was around 6 per cent. Over time, the total nominal return on long-term government bonds has been around 6 per cent and an average equity risk premium has been almost 4 per cent.

If we compare the structure of the 1970’s to the early years of 2000, it can be noticed that there had been a decline in the share of output provided by manufacturing with a rise in financial and business services. 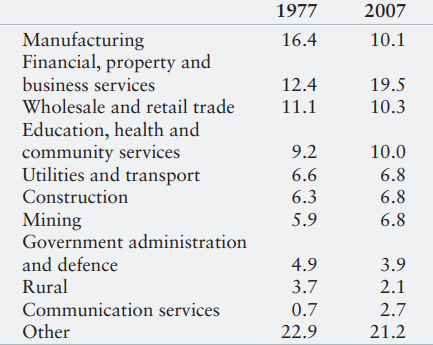 GDP growth over the century:

As per RBA official stats, 1991-2010 has been, by far, the longest period of growth that Australia has recorded this century. Even among the fast-growing emerging economies, a prolonged period of growth is a rare scenario, given various crises that occur over the period, but the Australian performance has been quite appealing in this regard. The country’s location, exports and population growth has together contributed to this growth. These have been quite evidently backed up by the disciplined financial policies that centre around the Australian economy. Reforms related to competition and industry policy and the labour market reforms also are a significant contributor to Australia’s GDP growth. 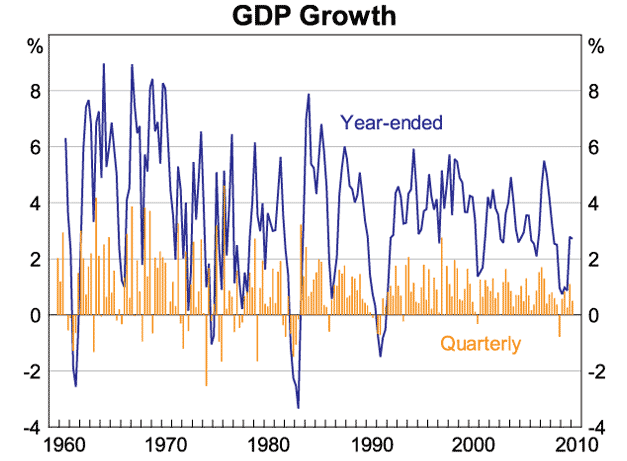 According to market experts, the Australian stocks have generated an average return of #% per year (Mid 2017), ever since the 1900s. Hence, it can be rightly inferred that the Australian equity market has grown over the past century to be an important part of the financial system.

In the recent times, where we are sustaining in an era of financial market extremes, the RBA figures state that the P/E ratio for the Australian share market is still at its 80-year average. Facts from the study conducted by RBA prove that there has hardly been any change on the ASX at a high level. Interestingly, there are companies like Bank of New South Wales, ANZ and NAB which have made it to the list of the largest listed business, established 100 years ago and continue to flourish.

Experts suggests that an average listed company in the Aussie land presently is aged 105 years against 77 years in Japan, 95 years in the UK and around 82 years in the US.

Given this backdrop of the Australian share market, let us look at few companies that have top performing stocks on the ASX over the past year: