A look at the Half-yearly report unveiled by BAP, CAR, DOW

Warren Buffett, the great investor had shared his view on diversification of stocks, which implies that it safeguards an investor against ignorance. Also, it makes a bit of sense when a person is aware of what he/she is doing. 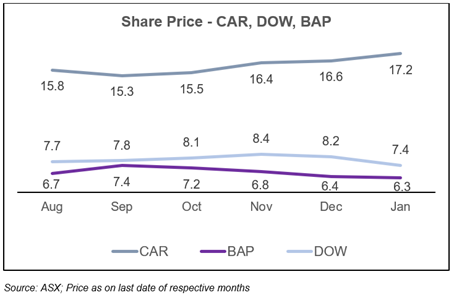 Consumer discretionary related company, Bapcor Limited (ASX: BAP) is a provider of accessories, vehicle parts, equipment associated with automotive, along with automotive aftermarket parts and services. BAP has a presence in nearly 1,000 locations spread across Australia, New Zealand and Thailand.

Below are two of the Company’s acquisitions which attributed to its growth:

On 1 November 2019, BAP notified the market that it has entered into an agreement to acquire two companies, namely - Truckline and Diesel Drive. The total purchase price was around $48 million.

ASX- listed company, carsales.com Ltd (ASX: CAR) is into the business of online motorcycle, automotive and marine classifieds in the Australian region. It provides a platform to sell or buy motorcycles, cars, trucks, boats and caravans.

Along with its subsidiaries, CAR provides employment to more than 600 people in Australia with operations across the Asia Pacific region. CAR has interests in leading automotive classified businesses present in countries such as Argentina, Brazil, Chile, Colombia, Mexico and South Korea.

To drive the business around the globe, CAR develops technology and advertising solutions such as New tyresales website, New LiveMarket, My Feed and others.

On 12 February 2020, DOW came out with its H1 FY 2020 results and announcement of dividend distribution relating to the six months period ended 31 December 2019.

On 5 February 2020, Perenti Global Limited (ASX: PRN) responded to a media speculation about the sale of DOW’s oil and gas sector-related operations and PRN being a potential buyer in this process. Following this, on 11 February 2020, DOW also responded that it has not given any consideration to the sale and confirmed that his business is not for sale.

CLICK HERE FOR YOUR FREE REPORT!
Tags:
Half yearly results