Property sector of Australia is one of the most prominent sectors, which generates employment, leads to increase in GDP, results infrastructure development etc. It looks like that during FY20, the Australian property market would experience a rebound, which most probably would be led by Sydney and Melbourne. In the below article, we will look at a few of the ASX-listed property related companies with their latest earnings updates:

Goodman Group (ASX: GMG) is an integrated property group, which is involved in property development and funds management business.

The company recently released its results for first half of financial year 2020, where the key management personnel of the company stated that 1H FY20 witnessed achievement of solid performance from all reportable segments. 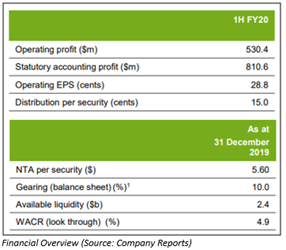 Also Read: A guide to diversification in REITs.

Arena REIT (ASX: ARF) manages ,owns and develops infrastructure properties based on social themes throughout Australia. The company officially got listed on Australian Securities Exchange in 2013.

How has the company performed during 1H FY20?

ARF, through a release dated 13th February 2020 notified the market with its operational and financial performance for the 1H FY20 and outlined the following:

Rural Funds Group (ASX: RFF) is a rural property investment company, which officially got listed on Australian Securities Exchange in 2014. Responsible entity for the Rural Funds Group, namely, Rural Funds Management Limited through a release advised the market that the Supreme Court of New South Wales has passed judgement in favour of Rural Funds Management Limited. The judgement has been passed with respect to legal proceedings with Bonitas Research LLC and its principal, Matthew Wiechert. The Supreme Court found that statements made by Bonitas and Matthew Wiechert in Australia were false in material data and were materially misleading.

When it comes to outlook for FY20, the company anticipates AFFO per unit of 14.0 cents for FY20, reflecting growth of 5.26% as compared to FY19.