A look at the Agriculture Focused Stocks: AAC, GNC & SHV

In this article, we would discuss the three stocks engaged in the Australian Agriculture sector. The flood and drought challenges had adversely impacted the agriculture sector of the nation, which in turn has affected the stakeholders as well. In addition, the global trade uncertainties have been playing a significant role in the fluctuating economy.

Specifically, the trade uncertainties have been idiosyncratic, as the Chinese tariffs on the US almonds provides upside potential for Select Harvests Limited (ASX: SHV), as reported in the company’s latest presentation. Meanwhile, GrainCorp Limited (ASX: GNC) has cited adverse impacts of trade flow disruptions, and it is expecting underlying losses.

Let us now look at a few agriculture sector related stocks for the better understanding. 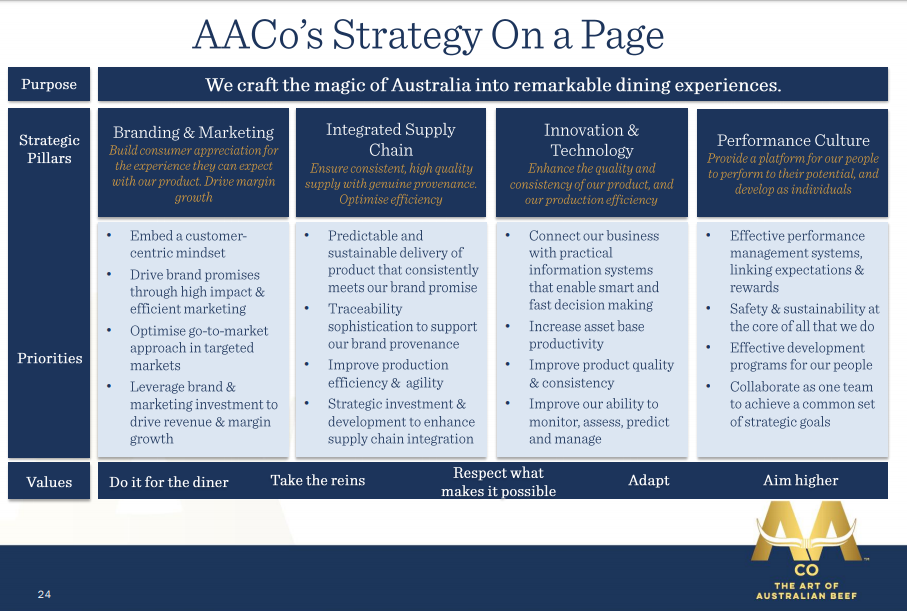 Besides, the release mentioned that Mr Blazer carries demonstrated capability in the food and hospitality industry and was a global leader in the industry. Further, it was asserted that Mr Blazer has an understanding to build brands around people, and he would play a crucial role to accelerate branded beef strategy to market, the company’s product to the best restaurants in the world.

Mr Blazer stated that the company was progressing well on the branded food business, and further opportunities existed as well. He said that building brands involved creating trust, particularly in the food industry. Further, it was asserted that he was impressed by the company and people, and at almost 200 years old, the company was a part of the Australian history.

AAC further notified that Schroder Investment Management Australia Limited became a substantial holder of the company on 2 August 2019, with 30,377,634 person’s votes and a voting power of 5.04 percent.

In a series of announcements made public on 31 July 2019, following the AGM, AAC has reported that it entered a 10-year lease of Rewan Station – a cattle backgrounding and finishing property in Central Queensland. Accordingly, the company has leased the property from the Rural Funds Group (ASX: RFF). Also, Rewan Station is 17,500 hectares of property located near Rolleston, around 200KM south of Emerald.

Also, the high-average annual rainfall in the area provides an advantage for pasture production, which improves the company’s capacity to background its premium Wagyu herd in a reliable high performing country. Besides, the lease would be approved by Foreign Investment Review Board (FIRB) and the concerned Minister to the Land Act 1994 (QLD), as the property is leasehold subject to a lease from the State of Queensland.

According to the Chairman & CEO’s address to the shareholders, it was asserted that producing high-quality beef is the unique ability of the company, and branded beef strategy is the appropriate strategy for the company. Besides, the company has started delivering in Dubai, and has established a new platform for the US consumer base. Besides, the global trading environment has been uncertain, and the company suffered a tough year and with financial numbers being impacted due to drought & floods.

Accordingly, in the Gulf region, the company’s 800k hectares were impacted across four properties due to floods, and an estimated loss of 43k cattle was suffered. Also, the scale and diversification had helped to diversify the losses suffered without impacting short-term business. Besides, rebuilding is expected to cost six to eight million dollars. Further, drought conditions in QLD & NT impacted the numbers heavily in FY19 period.

Reportedly, the seasonal impacts costed the company a $107 million in FY2019, which contains $47 million by Gulf Flood events and $60 million in drought related costs. Also, the statutory EBITDA loss of $182.7 million against the previous period’s loss of $35.3 million was driven by reduced livestock values. Besides, the net operating cash flows of the company improved by $53 million.

On 2 August 2019, the company announced FY19 earnings guidance. Accordingly, the company anticipates reporting underlying EBITDA for FY19 in the range of $65 to 85 million. Subsequently, it would report an underlying net loss after tax between $70 to $90 million.

Reportedly, the international grain trade flow disruptions and Australian wheat market is anticipated to reach $60 to $70 million, up from $40 million recorded in April 2019, has resulted in an expectation of negative impacts to the full year EBITDA. Also, the company had executed the old crop position, and the international market participants are not considering new season contracts resulting in no new crop trading opportunities in Q4.

As per the release, the crop forecasters are predicting below average production year in 2019/20. Accordingly, an independent forecaster has implied that June 2019 winter crop production to be of 14.4mmt, 22% below the 10-year average to 2018-19. Also, the company intends to manage the production risk, in doing so, it has agreed to a 10-year contract to manage eastern Australian grain production risk. 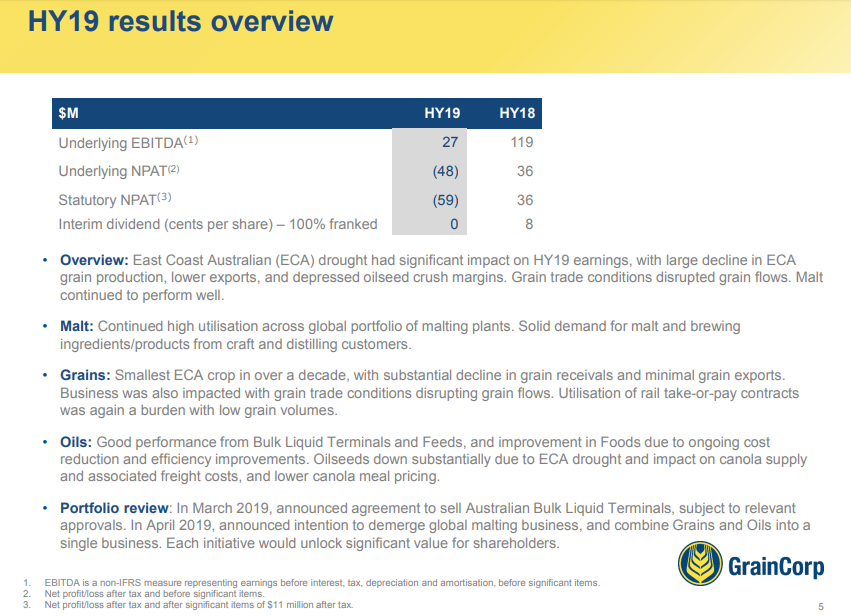 Subsequently, the contract comes into effect starting FY20, and it would provide reduced volatility in cash flows and earning during the low-production seasons. Further, the trading conditions for other businesses of the company are consistent with the expectations.

Mr Mark Palmquist, CEO of GrainCorp, stated that it is an extremely difficult year for the company on the back of developments in the global grain market, and added by drought in Eastern Australia. He also mentioned that consequences in Eastern Australia has made the company to ship 2.3 million tonnes of grain from South and WA to meet east coast domestic demand.

Select Harvests is an Australian consumer staples company. It is engaged in the production of almonds, snacks, cooking nuts, seeds, health mixes and muesli. Besides, the company is vertically integrated with its six brands (Lucky, Sunsol, NuVitality, soland, Allinga farms, Renshaw). In June 2019, the company presented at the PAC Partners 2019 AgFood Round Table.

Some of its brands are as enlisted below:

Lucky – It is a brand for Nuts & Seeds for over 60 years in Australia and leads the Australian market share. It provides products including almonds, walnuts, cashews, hazelnuts, Brazil nuts, pine nuts, pistachios, macadamias, sunflower seeds and pepitas.

Sunsol – It is a muesli brand, operating since 1991, and is one of the most popular supermarket brands with delicious and unique blends of muesli. Besides, the brand has a great opportunity in the Chinese market, and the distribution was achieved through e-commerce platforms, bricks & mortar retailers.

NuVitality – The brand is catering Australian natives since 1991 and is dedicated towards producing products that fit into a healthy lifestyle. The products of the brand intend to nourish the mind & body and to improve the vitality.

Allinga Farms – The brand is a bulk supplier of products, including inshell almonds to the emerging and advanced markets. Besides, the global demand for quality and reliable almonds contributed to the development of Allinga Farms.

Renshaw – It was established thirty years ago, renowned for reliability & quality. It supplies bulk product to major bakeries, manufacturers and wholesalers. 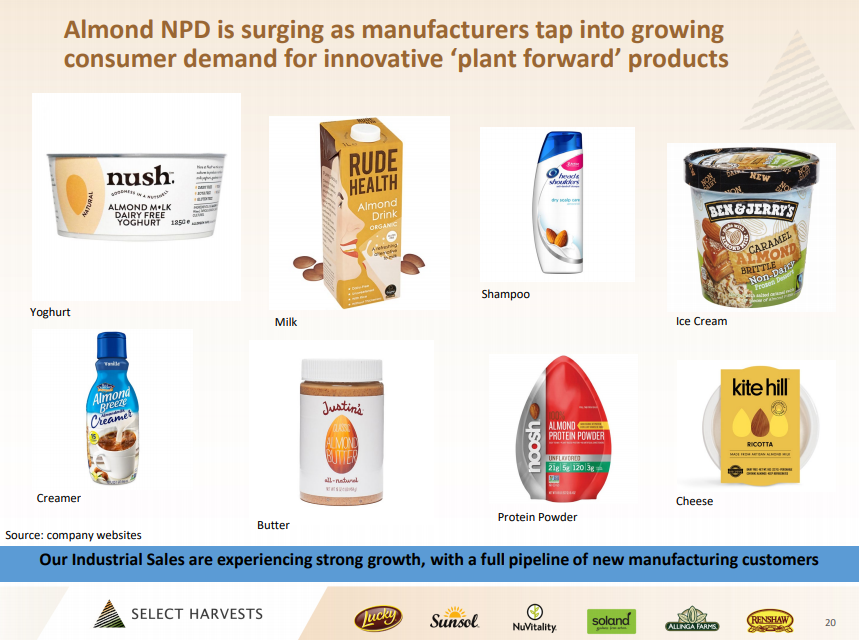 As per the presentation, the versatility and health benefits of almonds have resulted in the inclusion of almonds in more food manufacturers in their new products. Also, almonds were the number one introduced nut in new Bakery and Bars categories, and number two in Confectionary.

Company’s 2019-2020 Priorities: In accordance with the presentation, the company intends to ensure optimal tree health through 2020 Crop Horticultural Program. It further anticipates to successfully deliver 2019 crop with maximum price and quality. Also, the company would focus on reducing per kg costs across all production stages, and effective water management to tackle increasing dry conditions. Besides, the company would prioritise investment to deliver quality outcomes.