In this article, we are discussing six companies from the consumer discretionary sector. Black Friday has just passed, and officially, the festive season has started. However, the Westpac-Melbourne Institute Index of Consumer Sentiment for November 2019 claims that consumers are likely to keep discretionary spending in check.

It was reported that ‘the time to buy a major household item’ sub-index increased by 3 per cent in November. However, the sub-index was still below 4 per cent compared to August level as well as fairly below its long-run average.

On 29 November 2019, the company organised its Annual General Meeting for the 2019 financial year. In its Chairman Address, it was reported that 2019 was an outstanding year for the investment firm, and the business performed strongly at the bottom line as well as at the top line.

The performance of the portfolio was set against a backdrop of declining consumer confidence and uncertainty surrounding the outcome of the federal election in Australia. Despite domestic and global disruption, the company delivered a net profit after tax of $106.8 million, an increase of 28 per cent over the previous year.

This was driven by strong contribution from Premium Retail and Breville Group Limited (ASX: BRG). Also, the company has an investment in Myer Holdings Limited (ASX: MYR). At the year-end on 27 July 2019, PMV had free cash in hand of $190.3 million.

In FY 2019, the company declared total fully franked dividends of 70 cents per share, depicting an increase of around 13 per cent over the previous year.

The investment firm is expanding its capability by heavily investing in online offering for its retail business to cope up with technological changes and consumer expectations. In FY 2019, the online business delivered record sales of $148.2 million, an increase of 31.7 per cent year on year.

Recently, the group provided a trading update for the period 1 July to 21 October 2019 (unaudited). Domestic revenues grew 1.5 per cent over the previous corresponding period (pcp), backed by growth in Sydney and Queensland.

In international VIP Rebate business, normalised revenue increased over the pcp with front money flat over pcp, and the low actual win rate in the half-year FY2020 YTD negatively impacting the statutory results.

The group has implemented de-risking initiatives, and annualised cost reductions of approx. $45 million by the end of first half of FY 2020. It anticipates reporting normalised group EBITDA in the range of $300 million to $310 million for the half-year FY2020.

Recently, the group provided an update on the fire at the New Zealand International Convention Centre (NZICC) in Auckland on 22 October 2019.

Recently, the company provided an update on first-quarter trading.

In 1Q FY 20, the company recorded a total sales growth of 4.7 per cent against 5.3 per cent in the previous corresponding period with comparable sales of 3.7 per cent compared with 3.4 per cent in pcp.

In 1Q FY 20, the company recorded a total sales growth of -0.5 per cent against 2.3 per cent in the previous corresponding period with comparable sales of -1.8 per cent compared with 1 per cent in pcp.

Last month, Super Retail Group released the Investor Day Presentation. We would discuss the capital management strategy of the multi-branded retailer, as presented in the presentation.

SUL intends to maximise shareholder returns through focusing on financial targets, augmented by potential category-leading operating margins, and a target of return on capital in excess of the cost of capital.

The group emphasises to maintain a strong balance sheet and retaining financial flexibility. Meanwhile, SUL would potentially ensure that dividend pay-outs are maintained within the policy of 55% to 65% of underlying NPAT, fully franked.

Its balance sheet settings are focused on conservative credit metrics with capital expenditure target consistent with depreciation and amortisation expenses. 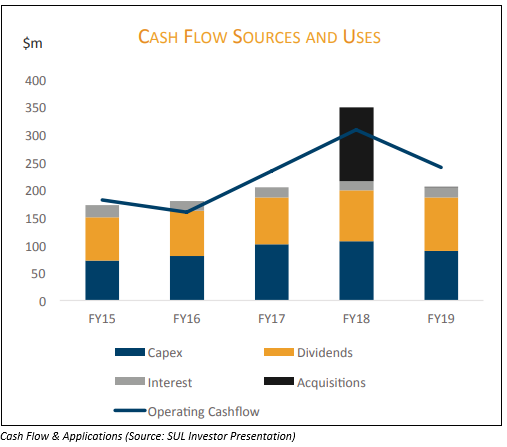 In its balance sheet management, the group has a target of net debt/EBITDA below 1.5 times, fixed-charge cover ratio above 2.2 times, and gearing of ~30%. The group has a $635 million bank debt funding facility.

Recently, the group convened its 2019 Annual General Meeting. In its CEO Address, Mr Daniel Agostinelli said that the group has moved its focus from acquisitions and integration to innovation in its core segment and expansion augmented by small targeted acquisitions and new concepts to expand market share in the $5 billion footwear market.

The group continue to grow its store footprint, and is on track to open forty-new stores in FY 2020, except The Trybe and PIVOT.

The group said it is targeting profit growth in FY 2020, underpinned by low-single digit growth, strong digital growth, new stores and The Athlete’s Foot corporate stores. It was also reported that the trading to date has been in line with expectations.

The group expects gross profit margin percentage and cost of doing business percentage to be consistent with the last year. Moreover, the company reiterated that there have been no major changes in the outlook compared with the disclosed during full-year results.