Ongoing Developments for FY20: Bingo Industries Limited (ASX: BIN) is an Australia-based waste management company. BIN expects to record EBITDA in line with the revised guidance for FY19 ending 30th June 2019. The company projects FY20 to be a transformational year, as the growth of the company will depend upon the development on new recycling and landfill asset at Patons Lane, upliftment from redevelopment program, advantage of price rise and integration of DADI business, which is expected to take two years to fully integrate the businesses. Already with this acquisition, by FY20, the company estimates its capacity related to RRC and landfill to get increased to 4.7 million tonnes per annum. Moreover, the company expects that the acquisition of DADI will result in synergies with regards to a cost of about A$15 million over a period of two years. Further, Patons Lane recycling plant is scheduled to open on 1st July 2019, Mortdale is likely to become operational in the first half of FY20, as 70% of the construction work has been completed. The construction for the development of MPC 2, located at Eastern Creek, is scheduled to start in the first half of FY20, with the work likely to get completed by the second half of FY20. Moreover, the company projects earnings to start from the network upgrade program from FY20. The project involved an initial network upgrade worth A$140 million. On 13th June 2019, BIN soared by 5.076%, settling at A$2.070. The company is trading at a P/E of 26.130x, while its EPS stands at A$0.075.

Forecast for the Second Quarter of 2019: Syrah Resources Limited (ASX: SYR), an industrial minerals and technology provider based out of Australia, in an interim update on the second (current) quarter 2019 ending 30th June 2019, reduced the projection with regards to the production and expects it to be in the range of 45kt-50kt from the previous forecast of 50kt-55kt. The revised production projection is attributed to later than planned results from the improvement plan for production. The company had a natural graphite production of 48kt in the first quarter of 2019. SYR is anticipating the production improvement plan to get speed up from June 2019 into the third quarter of 2019. Moreover, the shipped sales volume for the second quarter of 2019 is projected to increase to 50k from 48kt in the first quarter of 2019, which will ultimately depend on the completion of final shipping due in June 2019. Additionally, at the end of the second quarter 2019, the companyâs cash position is anticipated to remain unchanged at the level of about US$43 million. The company will release the performance of the second quarter 2019 in July. On 13th June 2019, SYR stock closed at A$1.075, down 1.376% from its last close. The company has 344.48 million outstanding shares and a market cap of A$375.48 million.

NucleusÂ® Profileâ ¢ Plus Series cochlear implant for European countries: Cochlear Limited (ASX: COH) is engaged in the design, production and supply of implants. The company has unveiled a new series of cochlear implant, named NucleusÂ® Profileâ ¢ Plus Series. The new series is targeted towards routine 1.5 and 3 Tesla magnetic resonance imaging scans, that does not require the removal of the internal magnet. In the next few months, the new series of cochlear implants will have commercial sales in Germany and other European nations. Further, the company plans to launch the NucleusÂ® Profileâ ¢ Plus series implant in other developed markets in next few months, after getting required regulatory approvals. On the other hand, for FY19, the company has already reaffirmed its net profit outlook and expects it to be in the range of A$265-275 million, representing an increase of 8%-12% on the same period a year ago. On 13th June 2019, COH rose 0.635% from the last close to reach A$203.010. With a market cap of A$11.64 billion and 57.72 million outstanding shares, COHâs six-month return stands at 18.36%. Annual dividend yield stands at 1.56%, while EPS is A$4.577. 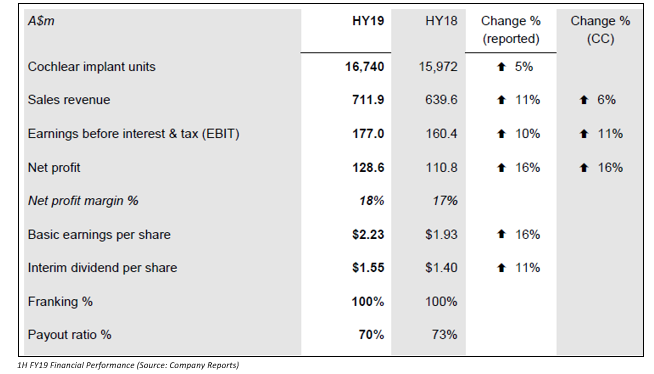 Appointment of Key Personnel: Biotechnology manufacturer CSL Limited (ASX: CSL) stock closed at A$212.640 on 13th June 2019, up 2.309% from the last close. The company has recently appointed Dr. Paul McKenzie as its new Chief Operating Officer (COO), who will head the newly created global end-to-end supply chain entity. Backed by his 30-year career, the new COO holds diverse biotechnology experience. On the other hand, for FY19, the company expects net profit after tax to be at the upper end of the earlier given range of USD1,880 million to USD1,950 million at CC. Moreover, the company had plans to open 30 to 35 new collection centres during FY19 and it is currently on track to achieve this. Seqirus is expected to deliver a loss during the second half of FY19. CSL has 453.14 million outstanding shares and a market cap of A$94.18 billion. Its six-month return stands at 13.76%, while one-month return is 3.89%. 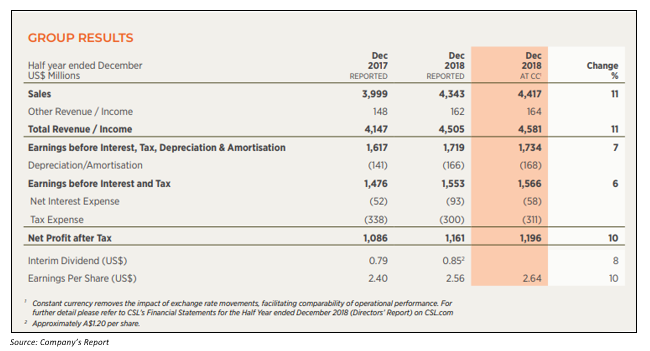 Update on Class Action: McMillan Shakespeare Limited (ASX: MMS) stock rose 1.159% on 13th June 2019 to reach A$13.960. On 12th June 2019 in an announcement with ASX, MMS gave an update regarding a class action that it is fighting in the Federal Court of Australia. The class action is related to a Davantage Group Pty Ltd-operated warranty product business. Davantage Group is a subsidiary of MMS-owned Presidian Holdings Pty Ltd. The company had to take order that the warranties of NWC or National Warranty Company (the trading name for Davantage Group Pty Ltd) are to be voided and all the financial obligations with respect to premium and interest are met. MMS is defending this legal suit and the next proceeding is scheduled to be in April 2020. MMS has a market cap of A$1.15 billion and 83.2 million outstanding shares. Its P/E ratio is 22.850, while annual dividend yield is 5.36% and EPS stands at A$0.604.