Let’s look at the updates on a few industrials and utilities sector stocks which trades on ASX.

The company has recently, announced on 26 July 2019 that it had reached the financial closure of the Fredericksburg Extension project, which is of the value of USD565 million. The company did this after it had raised US$262 million from the issue of private activity bonds. The company got the approval of this project in January 2018 by the Virginia Department of Transportation (VDOT). The company had started the major construction of this project in July 2019 and the project is anticipated to be completed in late 2022.

Further, the company notified on 27 June 2019, on raising €350 million through the private placement of senior secured notes under its Euro Medium Term Note Programme over the period of 15 years. The notes would mature in July 2034.

Achieved growth across all the markets in the March 2019 Quarter:

Below is the image depicting traffic performance for March 2019 Quarter:

Growth in The Number of Domestic Passengers Remains Subdued:

Sydney Airport (ASX: SYD) on 19 July 2019, provided the Sydney Airport Traffic Performance, wherein it notified that for the month of June 2019, it had posted 1.1% rise in the number of International passengers travelling to 1.3 million passengers.

However, there has been fall in the Domestic passengers by 1.6% to 2.1 million passengers on the back of capacity reductions along with subdued load factors. There has been 0.5% rise in the total number of passengers crossing through the Sydney Airport in the month of June 2019 to 3.4 million passengers. The same trend has been seen in the Year to Date growth performance of the company.

FY 19 Results Likely to be Affected on the back of the insolvency of Germany’s Senvion SA:

As per the release on 1 August 2019, the company anticipates that its full year 2019 financial results ended 30 June 2019, could be negatively affected on the back of the insolvency of the wind turbine manufacturer of Germany’s Senvion SA. Also, Senvion is DOW’s construction partner in the project Murra Warra wind farm situated in Victoria region.

The company projects that Senvion’s bankruptcy would lead to the pre-tax loss of $45 million ($31.5 million after tax) in the FY 19 result. The losses will arise due to the cost for completion of the project, the construction contingencies, its performance and liquidated damages. Therefore, DOW has begun discussions with all the important shareholders of the company for the establishment of a procedure that will secure the delivery of outstanding equipment and the conclusion of the wind farm project.

On 2 May 2019, in the Macquarie Australia Conference Presentation, DOW had confirmed on FY 19’s consolidated net profit guidance of $352 million, which did not include the Senvion impact. 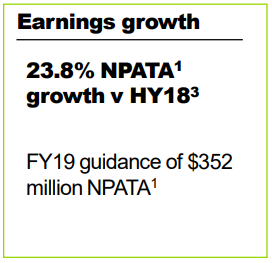 As announced on 28 May 2019, on 9th April 2019, Senvion SA, which had debt of more than a billion euros, had filed for self-administration proceeding and had received approval for insolvency from a German court. This was because Senvion was struggling with delays and penalties related to big projects.

Overall, the whole wind industry has been experiencing fall in prices and rise in competition. Meanwhile, as per the update on the project, on 1 August 2019 DOW has completed balance of plant work on time and on budget. It has installed 36 of the wind park’s 61 turbines out of which 13 are already producing electricity. Also, Downer and Senvion had signed an agreement that calls to work together for the commissioning of the wind turbine generators.

APA Group (ASX: APA) is a leading player in natural gas business. Its stock has provided a return of 14.39% in the previous three-month time frame. On 2 August 2019, the stock of the company was at A$11.17, by the end of the trading session, up by 0.359 percent from the last close.

Meanwhile, as per the company’s release on 4 June 2019, APA had signed an agreement for the extension of an existing gas transportation agreement (GTA) for further three years with Incitec Pivot Limited (ASX: IPL). The GTA was formed to underpin the continuing operation of IPL’s Gibson Island manufacturing plant. After obtaining the approvals required for the gas supply, the GTA will start from 1 January 2020 and would keep going on until 1 January 2023.

This is on back of the unusually strong traffic performance experienced in 2018 due to the French National Railway strikes. For the second (June) quarter of 2019, the company has delivered 0.3% rise in the Weighted average toll revenue compared to the second quarter 2018 and an increase of 1.2% for the first half of 2019 compared to corresponding period 2018, driven by increase in toll price and the traffic mix at APRR.

Meanwhile ALX stock has given a return of 17.35% in the last three months period. The stock of the company was at A$8.43, up by 1.322 percent from its last closing price.