A Look At Fashion Retailers On ASX - CCX, NBL, LOV

Once the products are designed and manufactured, the next process is to sell them. Retail is buying products from the manufacturers and selling those products to customers, and it should be noted that at times these functions are performed by one single entity. Digital penetration is also making structural changes in these organisations and how they operate; most of the fashion retailers have started offering products on dedicated online platforms.

Letâs look at a few of fashion retailers listed on the ASX.

Omni-channel retailer, City Chic Collective Limited (ASX: CCX) is a globally recognised plus size brand. The offerings of the retailer are aimed at fashion-forward women aged 18-35. It operates in the business with high margins and strong cash generation, and excellent shareholder returns. 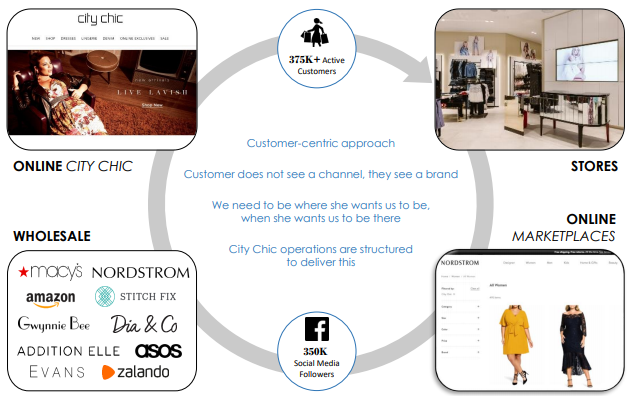 According to a recent announcement, the retailer reported that it is expecting underlying EBITDA from continued operations for FY19 to be in the range of $24â$25 million â consistent with analyst consensus. Also, it had been reported that independent experts were engaged in post-completion limited working capital adjustments, following the sale of Millers, Katies, Crossroads, Autograph and Rivers businesses in July 2018. Importantly, the conclusion from independent experts is in the favour of City Chic. The completion adjustment along with non-recurring expenses of the divestment would be finalised in the year-end FY19 Net Profit After Tax from discontinued operations.

On 3 April 2019, the retailer released a presentation from the Goldman Sachs Emerging Leaders Conference. According to the presentation, City Chic is positioned for success underpinned by the deep understanding of customers, leading position in the segment, omni-channel customer touchpoint strategy, and full-price sales with limited in-store discounting. The retailer is an omni-channel retailer with traditional stores, dedicated online-website, online marketplaces and wholesale, as well as more than 375k active customers.

Meanwhile, the group operates in global multi-channel business, and traditional brick & mortar contributes to over half of total sales; in the previous calendar year, 16% of the revenue generated was from the United Stated and Europe while the rest of the revenue was generated from Australia and New Zealand.

The company has 107 stores across Australia and New Zealand, primarily in CBD, metropolitan and major regional shopping centres with continued like-for-like growth and no loss-making stores. As of 3 April 2019, the retailer opened eight stores in the financial year wherein one of the stores was the third large format store.

Online channel is the fastest growing and most profitable channel of the retailer, underpinned by a state-of-the-art distribution centre through a toll in Sydney and third-party logistics provider in LA. It operates a 24-hour customer service live chat service, and the retailer continues to invest in the platform.

The retailer engages in partnerships that could drive brand recognition and sales in the international markets. In wholesale, the partners own the product and fulfil the sale, while CCX offers the owned products via partnersâ platform and fulfils the sale in marketplaces. In the United Kingdom and Europe, a few partners include Zalando, ASOS and Evans. 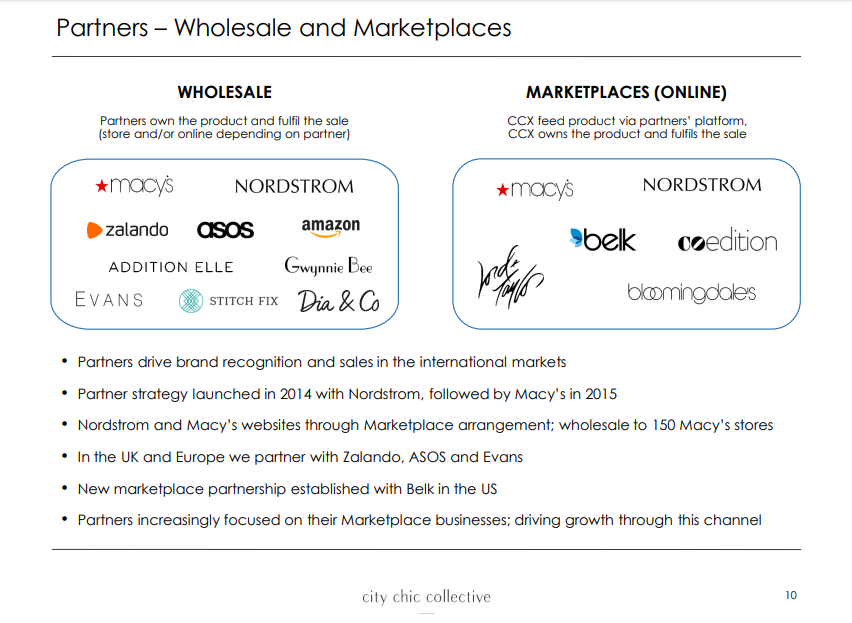 The retailer intends to capitalise on the dominant ANZ market position and observe major growth opportunity in the online segment through the extension of lifestyle to improve market share. City Chic would accelerate new store roll-out program, which is focused on returns and payback by 25 further new locations and 20 higher-performing stores earmarked for larger format. It would also enhance customer touchpoints through website updates and investments in in-store digital experience.

City Chicâs priority is to profitably grow the business in the US, through targeted customer acquisition, enhanced customer touchpoints, and new lifestyles and broader range. It would also maintain high profile partners to drive brand and product awareness and establish new partnerships across regions while also exploring new disruptive retail models.

Noni B Limited (ASX: NBL) is one of the best known Australian retail brands with decades of demonstrated service to the customers. On 3 May 2019, the company made an announcement regarding the appointment of Jacqueline A Frank as a Non-Executive Director. It was reported that Jacqueline possesses a deep background and understanding of the fashion and retail sector, and she is one of the most experienced media executives in Australia.

Earlier in March, Noni B had been in the news on the back of a release issued by the employee union - Shop, Distributive and Allied Employeesâ Association (SDA). The release is part of a campaign being carried out by the union against the proposed Enterprise Agreement by NBL.

Previously, the Enterprise Agreement had been approved by 81% of relevant employees, and the retailer declared that the campaign by the union was not in the best interest of its members.

Noni B asserted that the campaign is based on the incomplete understanding of the facts and for the company, wellbeing and safety of its team members is very crucial.

The group also expressed disappointment and concerns about the course of action adopted by SDA to change the widely accepted Enterprise Agreement. The company also suggested discussing the safety issue, which was not raised to the group. However, the union had been unwilling to have a meeting regarding addressing these issues. 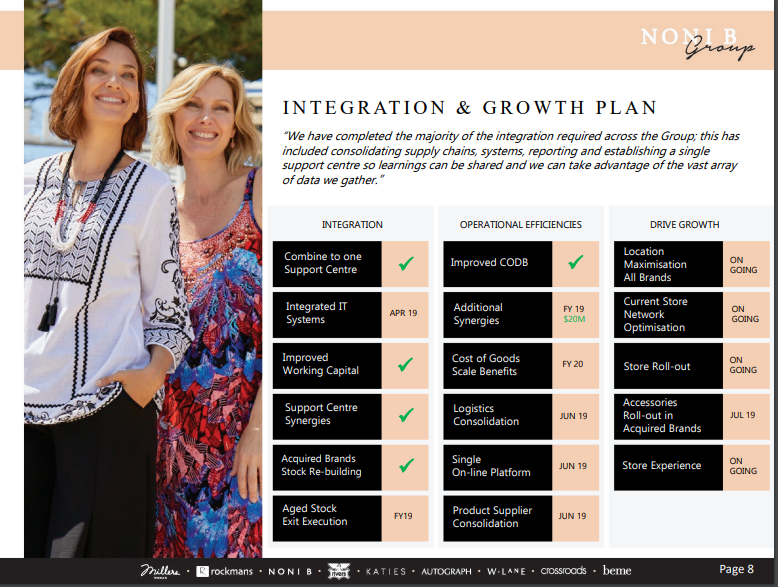 As per the release, the company witnessed a strong cash flow with $64.7 million cash on hand in the first half to 30 December 2018, which is 89.9% higher than the cash on hand reported during the same period a year ago. Furthermore, underlying EBITDA stood at $29.1 million for the period 1H 2019 compared with $22.1 million in 1H 2018; this represented an increase of 31.4%. Subsequently, the company also announced 9 cents per share of a fully franked interim dividend, which was paid on 22 March 2019.

Lovisa Holdings Limited (ASX: LOV) is a fashion-forward jewellery brand catering women. On 20 February 2019, the company announced the half-year results to 30 December 2018; subsequently, a fully-franked dividend of 18 cents per share had been announced, which was paid on 26 April 2019.

Reportedly, the business expansion continued in the first half of the year, and a net increase of 40 stores had been achieved. Also, the jeweller mentioned about the subdued market sentiments compared with previous years, which also impacted the strong Christmas and Boxing Day periods; this had resulted in slower growth in revenues. Further, the group remains focused on maintaining a strong gross margin. 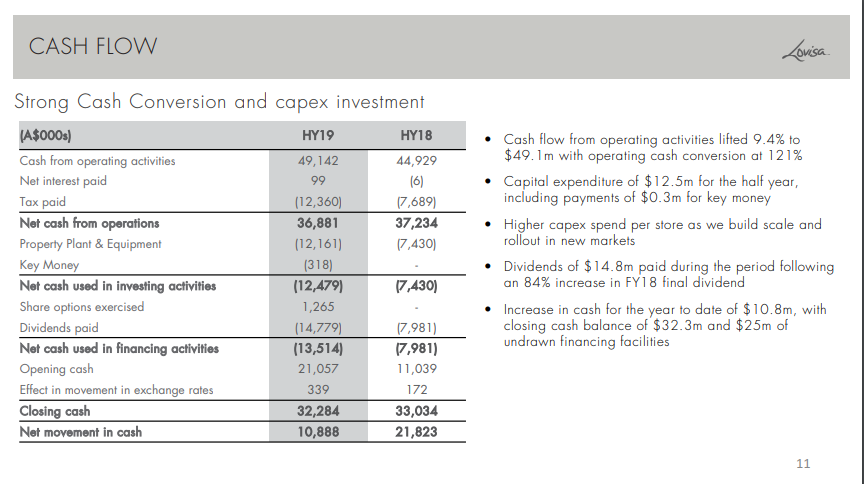 Lovisa Holdings asserted that trading had seen improvements since the half-year end across all markets; however, it is still below the comparable sales target range of 3-5%. It was reported that the company expects the currency headwinds to begin, and anticipated impacts in the financial year and into FY2020. Further, the company intended to increase the number of stores for the second half and improve on the first half numbers, and it would continue to invest in support structures to drive network expansion and underpin a larger business.