The Cannabis sector is comparatively broad than the expectations of various market research houses, boutique research house or asset managers etc. The prevailing status of cannabis legalisation gradually appears positive, but the market would unleash its further potential, once the legalisation gathers pace with less regulatory hesitance and smooth approval of drugs with related active ingredients. The industry size would exponentially increase as legalisation gathers pace; as of now, there are not enough countries with the full legal status of cannabis. A gradual shift to the partially/full legal status of cannabis from illegal status, in any country would change the numbers of expected market size or addressable market. With more than half of the world, still perceiving cannabis as unlawful; the current activities in the legal world depicts the underrated potential of the industry.

ASX-listed, Althea Group Holdings Limited (ASX: AGH) is a licensed producer, supplier & exporter of pharma grade medicinal cannabis, it operates in the highly regulated market including the UK and Australia and plans to expand throughout Asia & Europe.

On 14 June 2019, AGH announced that its medicinal cannabis products had been prescribed to one thousand patients in Australia through health care professionals. Previously in late April 2019, it was reported that the count had reached 651 patients, and now the new milestone depicts an increase of 53% on the earlier reported number of patients.

As per the release, Althea received 227 new patients during the month of May this year, and the average patients per business day are over 11 new patients. Notably, the 1000-mark milestone was achieved five months prior to the pre-defined target, depicting the growing need for AGH prescribed products in the Australian market. Also, 185 health care professionals (HCPs) had prescribed Althea’s products, and the company expects this number to grow to 200 by the end of June 2019. 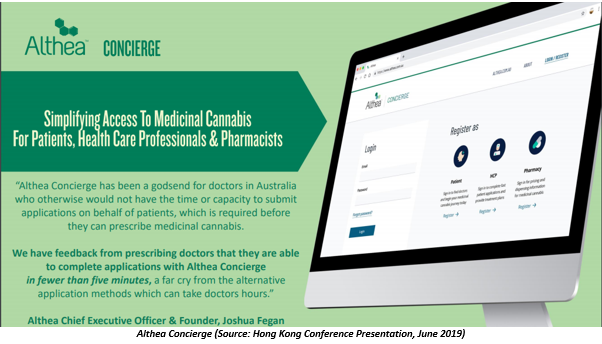 It is reported that AGH’s strategies are working, in an effective way to gain traction from the HCPs; these two strategies involve an on-the-ground Medical Science Liaison team, and the company’s highly efficient Althea Concierge reduces application times for HCP’s looking to prescribe medicinal cannabis.

AusCann Group Holdings Limited (ASX: AC8) operates in four different segments- Partner, Licence, Education & Clinical Trials. AC8 engages itself with the other leading market participants and operates the entire medicinal cannabis value chain and delivers high-quality, clinically validated and economical cannabinoid medicines to Australian patients – through Partner segment. While in Licence segment – the company licenses the current high-quality plant genetics along with proven cannabinoid medicines & formulations through partnerships; notably, the partnership with Canopy Growth Corporation is witnessing the use of formulations among an existing patient base of 24,000. 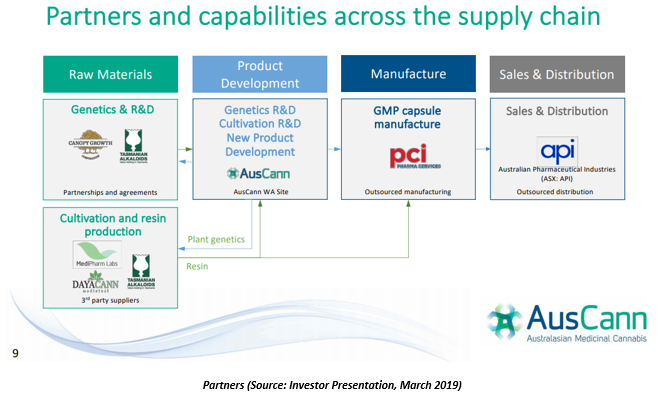 On 22 May 2019, Mr Ido Kanyon joined AC8 as the company’s Chief Executive Officer (CEO) following the announcement made public during February 2019. It was reported that Mr Ido Kanyon is renowned professional in the industry, and his experience from product development and commercialisation is in line, with AusCann’s next phase of development in sales & marketing of its pharmaceutical products.

Since its listing on ASX, the stock of the company has given a return of +222.48%. Cann Group Limited (ASX: CAN) is the first medicinal cannabis cultivation licenses & permits recipient of Australia. CAN operates two cultivation and R&D facilities in Victoria and maintains key relationships with prominent industry participants.

The company is dedicated to obtaining a clear pathway to sustained profitability through its expansion and growth of the business. As per the investor presentation, released in April 2019, CAN’s Mildura facility would produce up to 50,000 kg of cannabis per annum at full capacity, and this translates to expected revenue of ~$160 to 200 million at the current wholesale price of Cannabis dry powder. 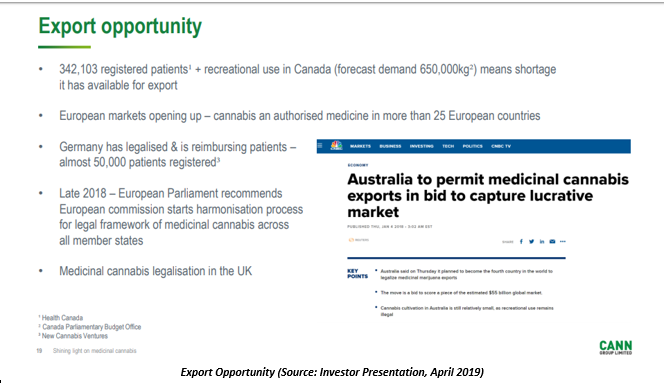 Recently, in May 2019, it was announced that the company delivered cannabis plant extract (resin) to Victoria Govt’s Department of Health and Human Services (DHHS). CAN also reported that the revenue from the delivery was realised; notably, the delivery marked milestone of first Australian sourced and commercially grown cannabis resin for use by Australian patients.

Creso Pharma Limited (ASX: CPH) aims to provide the best of cannabis to better the lives of people and animals; it is engaged in the development of hemp-derived therapeutics, lifestyle products and nutraceutical. 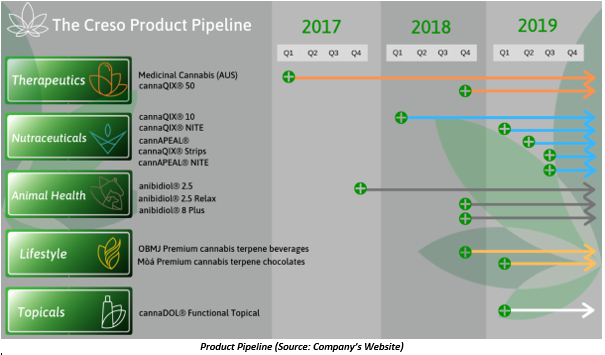 On 7 June 2019, it was reported that the company has entered into a scheme implementation agreement with PharmaCielo Limited (TSXV: PCLO), which entails that PharmaCielo would acquire Creso Pharma. In accordance with the release, the acquisition of CPH would be executed by a share scheme and an option scheme. Furthermore, CPH shareholder would receive 0.0775 PharmaCielo shares for each Creso Pharma share held representing an offer price of AUD$0.63 per Creso Pharma share on the basis of three days VWAP of PCLO shares, and this represents a 50% premium to CPH shareholder on the basis of closing price of Creso shares on 6 June 2019 – under the share scheme.

The announcement read that CPH optionholders would obtain 0.0185 PharmaCielo shares for each listed option held, which denotes an offer price of AUD$0.15 per Creso listed option based on three-day VWAP of PCLO shares. Importantly, the option scheme is dependent on the completion of the Share Scheme, but share scheme is not dependent on the option scheme.

As per the release, PharmaCielo would advance a CAD $3,500,000 secured bridge loan to Creso Pharma subject to amendment of loan trust deed entered earlier. Also, Dr a – Co-Founder and CEO of Creso Pharma Limited would be appointed as a director of PharmaCielo post the acquisition. The Board of the company had recommended shareholders to vote in favour of the acquisition on unanimous basis.