A mid-cap stock refers to the shares of the entities containing market capitalisation, which falls under the range of large-cap company and a small-cap company. Mid-cap stocks are always in the middle of their respective growth curves, and the most appealing feature of mid-cap stocks is that they are most likely to grow and increase the profits, productivity and market share. These stocks provide a balance of both stability and growth to investors and are believed to diversify investment risks as well.

In the light of this context, let us look at the recent updates and stock performance of two mid-cap financial stocks- NWL and SDF:

The image below depicts the six-month returns of both the stocks under discussion. It can be noticed that they have delivered positive returns in this period with the NWL’s stock return at 16.40 per cent and the SDF’s stock return at 24.54 per cent.

Company Profile: A player in the financial sector and one of the fastest growing wealth management firms in the Aussie land, NWL was listed on ASX quite recently in November 2017. The company provides superannuation, retirement and likewise platform products to financial advisers and clients and has its registered office in Melbourne. The company was founded in 1999 and is a financial services technology entity, a superannuation fund and an administration business.

Quarterly Business Update: On 11 April 2019, the company released its Quarterly business update for the period ending March 2019. It was announced that the company’s Funds Under Administration amounted to $21.1 billion, an amount which was up by $2.1 billion in the period. This was also the largest quarterly FUA increase ever since the company’s listing. The increase was approximately 31.5 per cent ($5 billion) in the last 12 months till 31 March this year.

The company was selected as the multi-asset and multi-currency provider for ANZ Private. The platform would commence in July 2019 and cater to domestic managed funds, foreign currency, global equities and bonds and term deposits. NWL had been selected by various other new advisors as their preferred platform.

The FY19 FUA net inflows are expected to likely exceed the FY18 figure of $4.166 billion. The company was awarded with the Number 1 platform for overall functionality by a competitive analysis and benchmarking report. It was also accoladed with the Transaction Tools and Best Reporting. The company also bagged an award for best New Functionality.

As per a market update, the company had achieved its highest platform flows in 2018 amounting to $4.3 billion. 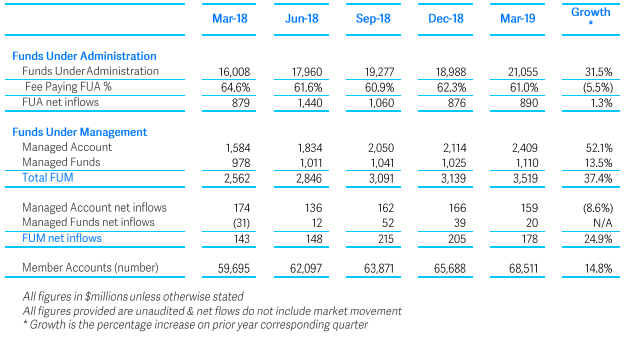 Netwealth’s 1H 2019 financial highlights: In February this year, the company released its financial reports for the half-year of 2019. It notified that its revenue, profit and marginal trend had increased in the period, continuing the company’s growth momentum.

All key financial metrics witnessed a growth, as discussed under, considering 1H 2018 as the prior corresponding period:

Company Profile: Considered to be Australasia’s largest general insurance broker network, SDF offers a range of insurance products and possesses over 380 insurance brokerages. The company is growing its operations in Asia and Europe and was listed on ASX in 2013. With its registered office in Sydney, the company supports its brokers and underwriting agency businesses by allowing them to focus and adhere to their clients’ insurance and risk management needs. SDF operates with an offer and acceptance model.

Company Update: On 26 June 2019, the company announced that it had entered into an agreement with Insurance Brokers Network Australia Limited regarding the latter’s members becoming part of the company’s Network and renouncing rights to rebates from professional services fees to the company, due to the business placed by those members with strategic partners.

The initial consideration for the agreement, subject to adjustments, is approximately $9.13 million, and the initial purchase price is $76 million.

There would be an issue of SDF’s shares on finalisation with the IBNA members obtaining consideration in amount to the entire rebate that they secure from IBNA and the AIMS JV.

Macquarie Conference Presentation: On 1 May 2019, SDF released a presentation which was presented at the Macquarie Conference at Sydney and in it was mentioned that its automated contestable market was creating a good competitive environment and providing coverage for clients. The Steadfast Client Trading Platform is expected to generate a GWP of approximately $500 million in the FY19 period.

The unisonSteadfast, a global insurance broker network with 230 brokerages spread across 130 countries, has an annual GWP of more than $25 billion. With a 40 per cent equity holding, the company aims to roll out products and services for the platform, like the INSIGHT and SCTP.

As per the company, in FY19 (till the time of the presentation being published), the company had 10 new equity holdings and 9 equity step-ups in existing holdings along with 2 hubbings. 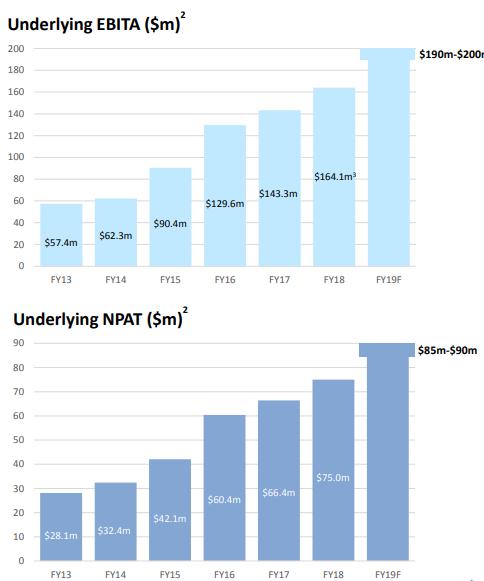 EBITDA and NPAT over the years (Source: Company’s Report)