The S&P/ASX 200 Industrials Index stood at 6,897.0 on 5 July 2019, up 0.5%. Discussed below are four stocks from the Australian industrial sector and all of these have market capitalisation of more than a billion.

Bingo Industries Limited (ASX: BIN) was formed in 2017 and is based out of Auburn, a suburb in western Sydney, Australia. The company, along with its subsidiaries, operates as a waste management solutions provider. It caters to domestic as well as commercial businesses in the country. With a market capitalisation of around AUD 1.55 billion and approximately 661.13 million shares outstanding, the BIN stock settled the day’s (5 July 2019) trading at AUD 2.350, with around 2.72 million shares traded.

In addition, BIN has also delivered positive return yields of 46.42% for the last three months and 28.77% YTD.

Recently on 26 June 2019, the company released its Investor Presentation touching upon the Dial-a-Dump Industries (DADI) acquisition, Sustainability, Zero Harm Update, Victorian Strategy and other aspects of the business.

On 25 March 2019, Bingo announced to the market that following the satisfaction of certain regulatory requirements associated with the Australian Competition and Consumer Commission’s approval, the company had completed the acquisition of DADI, a fully integrated recycling and waste management services provider in NSW, with operations across the waste value chain from collections, to recycling, landfill and recycled product sales. DADI’s principal asset is the Eastern Creek recycling and landfill asset that spans ~55 hectares in the Western Sydney growth precinct and has an approved capacity of up to 2 million tonnes pa, and ~15-year useful remaining landfill life.

The transaction has been completed at an enterprise value of $ 577.5 million. Integration is well underway and is expected to take up to two years to fully integrate the two businesses. 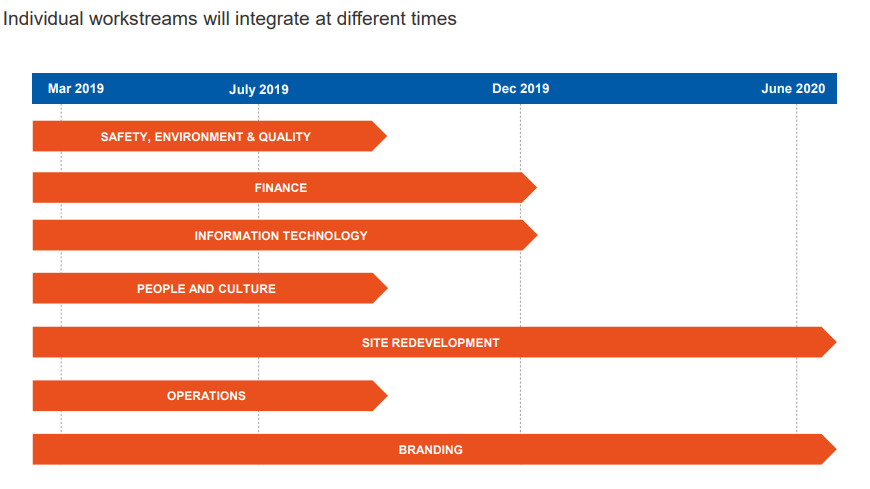 There are several benefits that will be realised from the DADI acquisition. Some of the benefits from the acquisition include the following. 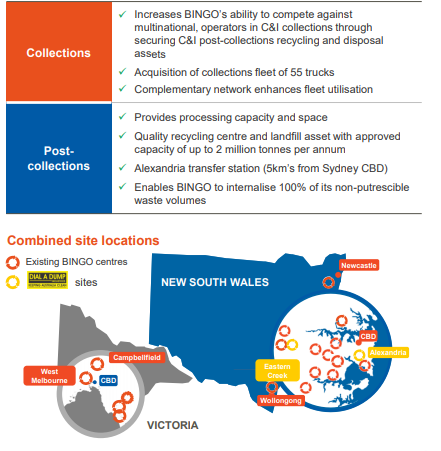 The company’s long-term sustainability goals comprise climate risk, leading practice environmental management, health & safety, energy & GHG emissions, and diversity & inclusion. The company had approximately 45% of FY19 EBITDA coming from recycling or product manufacturing, as it intends to significantly contribute to the development of a circular economy in Australia.

Bingo has built its business around the commitment to Zero Harm and it has a strong governance process lead by the Board Zero Harm Committee and its SEQ team, while the company also has over 900 employees responsible for safety across the business.

Reece Limited (ASX: REH), founded in 1920, is engaged in the distribution of plumbing, waterworks, and heating, ventilation, air conditioning and refrigeration (HVAC-R) products. The company employs a staff of around 8,000 people, who are committed to improving the lives of their commercial and residential customers. It has 800 branches, serving its clients in the markets of Australia, New Zealand and the United States. With a market capitalisation of around AUD 5.48 billion and around 560.82 million shares outstanding, the REH stock closed the day’s (5 July 2019) trading at AUD 9.870, up 1.024% by AUD 0.100 with around 716,061 shares traded in total.

As per the half yearly results for the six months ended 31 December 2018, the group recorded net sales revenue of $ 2,718.2 million, up 104% from the same period a year ago and a normalised EBITDA (Earnings Before Interest Tax Depreciation and Amortisation) of $ 260.1 million, reflecting a 45% increase over the prior period. 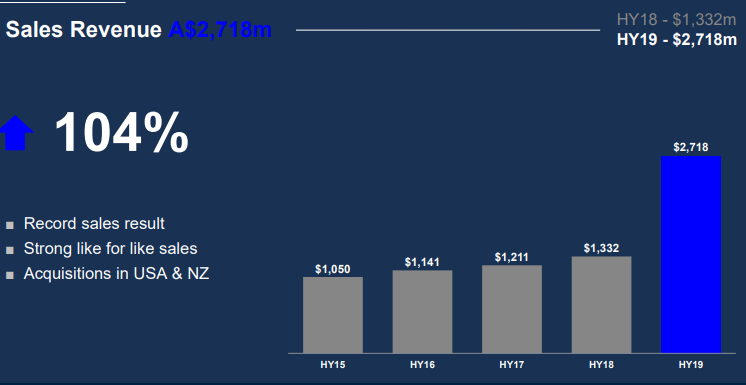 In addition, the group’s statutory net profit after tax (NPAT) amounted to $ 97.8 million, down 8% on the prior comparable period.

The latest results released incorporated the performance of the newly acquired US business, MORSCO, which exhibited a good performance, well in accord with Reece’s expectations.

According to Reece, Australia’s residential building market is experiencing moderate growth, while the non-residential commencements remain robust. Also, there is a continuously building business momentum in the United States, as construction and investments in infrastructure are returning to their long-term averages.

As for the operational performance, Reece added 20 new branches in the Australian and New Zealand network on the back of organic growth as well as strategic acquisitions. While overseas in the United States, MORSCO also opened two new outlets in the Sun-Belt region, located across the Southern and Southwestern portions of the country from Florida to California.

In February 2019, the board of the company also declared an ordinary fully paid dividend of AUD 0.060. The dividend was paid on 28 March 2019, with respect to the period of six months ended 31 December 2018.

Brambles Limited (ASX: BXB), established in 1875 and based in Sydney, Australia, provides supply-chain logistics solutions based on the provision of reusable pallets, crates, and containers for shared use by various participants in the supply chain.

The company has a sustainable logistics business, which is based on the concept of sharing and making reuse of its platforms under a model. The company primarily caters to fastmoving consumer goods, beverage, fresh produce, retail and general manufacturing industries. The company has a market cap of ~ AUD 20.1 billion with 1.59 billion shares outstanding. On 5 July 2019, the BXB stock last traded at AUD 12.360, down 2.292% from its previous close with approximately 9,046,662 shares traded.

Recently, Brambles provided an update to its announcement dated 25 February 2019, whereby it had informed the stakeholders to have signed a binding agreement to sell its IFCO reusable plastic containers (RPC) business to Triton and a subsidiary of the Abu Dhabi Investment Authority (ADIA) for an enterprise value of ~USD 2.51 billion. Thereafter, on 3 June 2019, Brambles announced that it had completed the sale of its RPC business on 31 May 2019 in the Netherlands after the necessary regulatory approvals were received.

In addition, the company had also declared on 25 February 2019 that it intended to return up to USD 1.95 billion of proceeds from the transaction to shareholders through a combination of a pro-rata return of cash of approximately USD 300 million and an on-market share buy-back of up to USD 1.65 billion. The remainder of the proceeds were indicated to be directed towards repayment of the debt to maintain leverage in line with the credit policy approved by the Board.

In early June 2019, Brambles also initiated an on-market buyback which paused on 23 June 2019 when the company entered its blackout period till the time it announced its full year results for 2019 on 21 August 2019. Besides, the pro-rata return of cash (expected to be paid out in October 2019) remained subject to the ATO ruling and shareholder approval that is to be obtained at the 2019 AGM.

In April 2019, the company released its FY19 third quarter trading update according to which it posted sales revenue from continuing operations of USD 3.409 billion for the first nine months of the fiscal year ended 30 June 2019 (FY19), up 7% on the prior corresponding period at constant FX rates. A snapshot of its segment-wise performance is as follows.

ALS Limited (ASX: ALQ), established in 1863 and headquartered in Brisbane, Australia, is a global lab testing, inspection, verification & certification business. ALQ has a market capitalisation of around AUD 3.78 billion with approximately 485.51 million shares outstanding. On 5 July 2019, the ALQ stock last traded at AUD 7.880, up 1.285% by AUD 0.100, with approximately 1,492,036 shares traded. 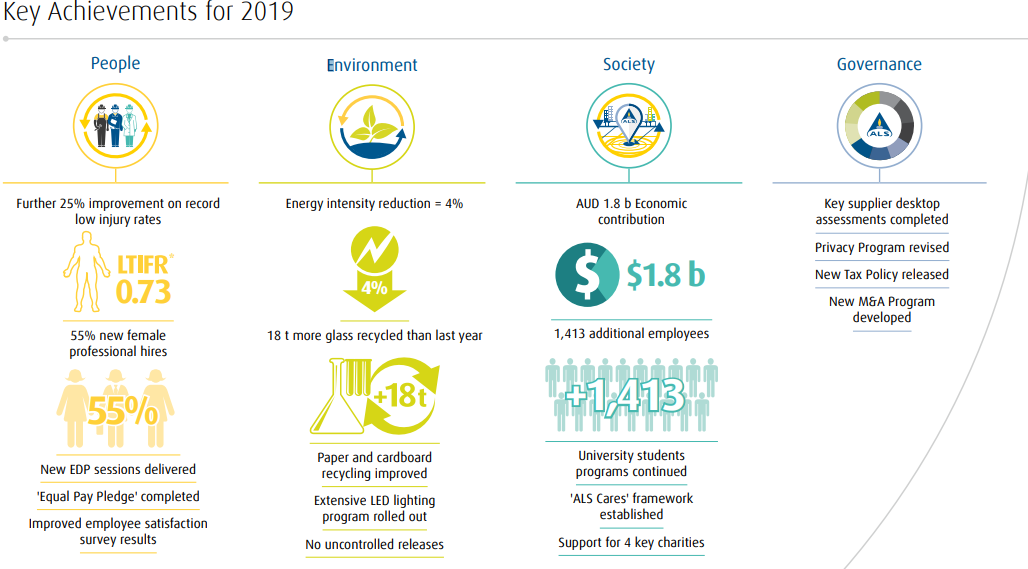 The strong financial performance reflects enhanced levels of profitability and organic growth across all regions in Life Sciences division, market leading position in businesses leveraged to the expanding mineral commodities sector and acquisitions in high growth areas of food and pharmaceutical in mainland Europe, South America and North America. 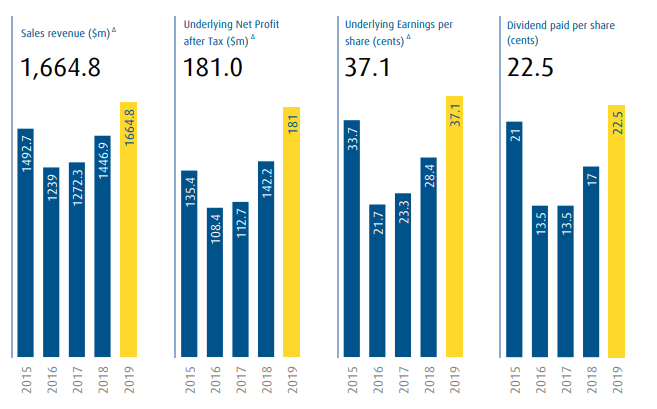 During the year ALS invested $ 100 million in strategic acquisitions and growth projects.