Managed funds are also referred as pooled investments or collective investments. Below is the list of some of the most popular managed funds offered in Australia:

Founded in 2006 and headquartered at Sydney, Australia, Magellan Global Trust (ASX: MGG) is a global equity fund and a wholly owned subsidiary of Magellan Financial Group (ASX: MFG). The trust focuses on investing in the best companies across the globe, with the aim of growing and protecting its clients’ capital. Its staff size of 32 qualified and experienced investment professionals manages global equity and infrastructure strategies worth more than A$82 billion (As at 31 May 2019). Airlie Funds Management, the trust’s wholly owned subsidiary, is focused on Australian equities. MGG’s offices are located in Australia, New Zealand and the United States.

In an ASX announcement dated 12th June 2019, MGG gave an update related to the ASX listed investment trust for the month of May 2019, which is managed by Hamish Douglass and Stefan Marcionetti. The fund has an annual management & administration fee of 1.35%. The fund has an average price of A$1.7303 each unit, with fund size amounting to A$2,142.4 million.

Some of the leading holdings of the trust are in information technology, health care, internet & e-commerce and consumer defensive sectors. Below is the table giving details related to the trust’s top 10 holdings. 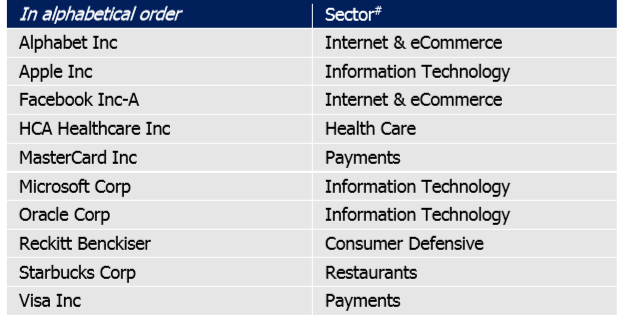 Below listed are some of the key features of the fund:

With respect to revenue, the trust generates 47% from the United States, while the remaining 17%, 13%, 10% and 12% are contributed by Emerging Markets, Western Europe, Rest of Word and cash.

As a specialist funds management entity, Magellan Financial Group Limited (ASX: MFG) was formed in 2006 and is headquartered at Sydney in Australia. The other offices of the company are located in New Zealand and the United States. Magellan Asset Management Limited is the company’s main operating subsidiary. The unit has a fund management portfolio of over A$80 billion, as at the end of April 2019. The unit serves retail, high net worth and institutional investors by managing Australian equities, global equities and global listed infrastructure strategies.

On 7th June 2019, the company made an announcement related to its Funds Under Management (FUM) for the month of May 2019. As per the update, it had a total FUM of A$82.76 billion at the end of the month, including retail FUM worth A$21.97 billion and institutional FUM of A$60.79 billion.

The numbers were less than those reported for the fourth month of 2019. Its April 2019 FUM was A$83.23 billion, which included A$22.36 billion and A$60.88 billion in retail and institutional FUM, respectively.

In terms of strategies, the company reported global equities worth A$60.71 billion, while infra and Australian equities stood at A$14.61 billion and A$7.44 billion, respectively, in May 2019. In the reported month, net inflows reached A$264 million, including A$146 million in net retail inflows and A$118 million in net institutional inflows.

Australia-based Platinum Asset Management (ASX: PTM) is a global equities management firm, which manages a total portfolio of A$24 billion. The firm is specialized in listed investment companies, unlisted as well as Australian listed managed funds, mFund and offshore products. Established in 1994, PTM has received awards such as Morningstar Australian Fund Manager of the Year 2018.

In an announcement with ASX on 7th June 2019, the firm gave a summary regarding its funds under management (FUM) for May 2019. FUM for the fifth month of 2019 were A$24.93 billion, compared to A$26.58 billion in the previous month. PTM reported nearly A$200 million in net outflows in May 2019, including A$150 million in net outflows from the Platinum Trust Funds.