Many investors with less risk appetite favour dividend paying stocks as they offer steady income flow. Let us take a look at two of such stocks trading on the Australian Securities Exchange.

An Australian media company, Nine Entertainment Co. Holdings Limited (ASX: NEC) creates and curates quality content, accessed by consumers as per the requirements. The company primarily has television and digital segments and is into television broadcasting and program production.

The company recently announced an ordinary fully paid dividend of AUD 0.050 related to a period of six months ending 31st December 2018. The company declared that 100 per cent of the dividend would be franked and 30 per cent corporate tax rate will be applicable for franking credit. The declared dividend was intended to be paid on 18th April 2019 with the record date and ex-date of 6th March 2019 and 5th March 2019, respectively.

On 21st February 2019, Nine published its half-yearly FY19 results for the half-year ending 31st December 2018. The company reported Net Profit After Tax of $172 million on a Statutory basis, and Group EBITDA of $178 million during the period.

The company released a Macquarie Conference Presentation on 1st May 2019 in which it indicated that the overall positive momentum is expected to continue for the company. The company expects EBITDA of over $30 million in FY20 as Stan moves from loss to profit. 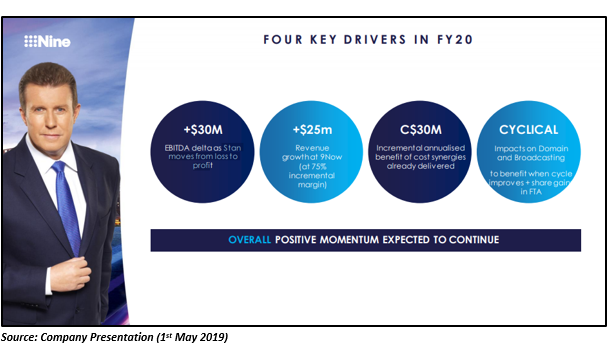 The companyâs stock closed lower on the ASX on 31st May 2019 at AUD 2.080 with a fall of 1.42 per cent. The NECâs market cap stood at AUD 3.6 billion at the time of writing the report. However, the stock has performed quite well in the previous months delivering a YTD return of 56.30 per cent. The stock generated a return of 20.23 per cent, 19.21 per cent and 20.57 per cent in the last six months, three months and one month respectively.

Established in 1964, Ramsay Health Care Limited (ASX: RHC) is headquartered in Australia having over 50 years of experience in providing acute health care services. Ramsay provides a large number of acute and primary healthcare services in over eleven countries from its 480 facilities. It is among the largest and most different private healthcare companies across the globe. 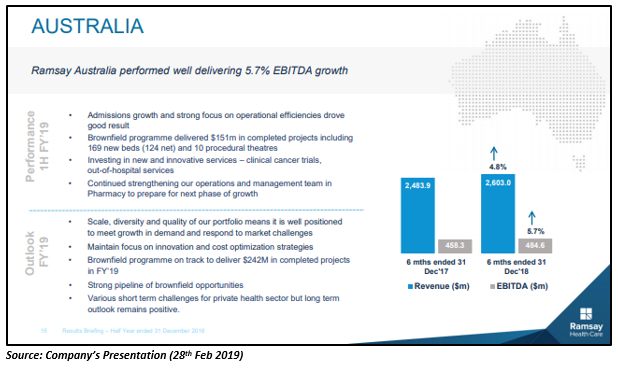 Ramsay has displayed strong consistent growth in dividends as depicted below: 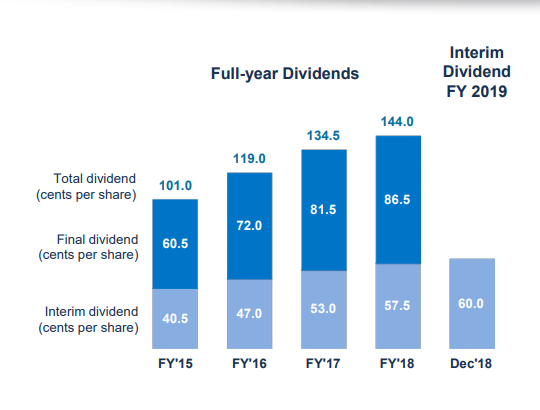 Ramsay recently declared a fully franked dividend of AUD 2.293 related to a period of six months. The company notified that 100 per cent of the dividend would be franked with 30 per cent corporate tax rate applicable for franking credit. The declared dividend will be payable on 21st October 2019 with the ex-date and record date of 2nd October 2019 and 3rd October 2019 respectively.

Recently, the company also declared that its Group Finance Director and Chief Financial Officer, Mr Bruce Soden will be stepping down in the second half of this year.

The companyâs stock ended up higher at AUD 69.83 (As on 31st May 2019) on ASX, with a rise of 0.92 per cent in comparison to the last closed price. The stock has delivered a positive return on a YTD basis of 19.79 per cent. In the last ten years, the stock has generated an exceptional return of 531.75 per cent.