Australia has seen steady growth in the media industry across all the media segments in recent years. The swift evolution of technology has revamped the Australiaâs media industry into an experience-led industry. The Australian companies in the media and entertainment sector are offering innovative experiences to consumers and businesses, generating profitable growth.

The fast-moving media industry offers numerous opportunities and grabs the market's attention easily. Taking this into consideration, let us look at few ASX-listed stocks from the media and entertainment industry that are currently in the news below:

Australian-headquartered Nine Entertainment Co. Holdings Limited (ASX: NEC) is a creator of the countryâs leading broadcast brands, across television and radio. It is also known for its digital publishing and leading local SVOD business. The company holds a dominant position in the high growth digital video market.

Why Nine is in News Now-a-days?

News are doing rounds that Disney and Nine might enter into a commercial partnership which would mean a tie-up between the Stan and Hulu platforms. Stan and Hulu are subscription-based video-on-demand services controlled by Nine and Disney, respectively. Disney is set to roll-out its new streaming venture Disney+ in the United States in November this year. However, its plan to launch the service in Australia is yet to be confirmed. It is expected that a partnership between Nine and Disney will offer a bundle of opportunities and dramatically change the Australian Media Industry. With the partnership, Disney could utilise Stanâs 1.5 million active subscribers and established customer base in Australia.

Recently, Nine has announced an all-cash off-market takeover offer for Macquarie Media Limited or MML (ASX: MRN) under which Nine intends to acquire all the outstanding shares in MML at $1.46 per share. Nine notified that the acquisition will be 100 per cent financed from existing debt facilities and cash reserves. The Offer valuing $275.4 million, will include payment of MMLâs August 2019 dividend and its net debt of $22 million as on 30 June 2019.

The Independent Directors of MML have informed that MML shareholders have accepted the conditional takeover offer lacking a superior proposal, contingent upon an independent expert opinion that the Offer is reasonable. However, Macquarie's largest institutional shareholder has criticised the Macquarie Media board for advising Nine's proposal as per which the takeover bid is below the market price against the usual takeover bids that are above the market price.

During the first half of FY19, Nine reported an NPAT of $172 million on a statutory basis, which was 1 per cent below the figure of the previous corresponding period. On a Pro Forma basis, the company announced a Group EBITDA growth of 6 per cent to $252 million, Net Profit After Tax and Minority Interests growth of 5 per cent to $126 million and revenue of $1,204 million. 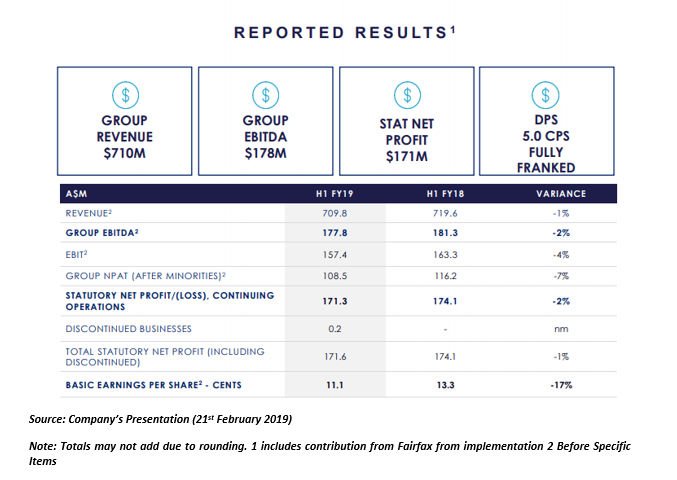 A global diversified media and information services company, News Corporation (ASX: NWS) focusses on creation and distribution of engaging and authoritative content, and other products and services to businesses and consumers across the world. The company is engaged in diversified businesses including subscription video services in Australia, news and information service and book publishing and digital real estate service.

Why News Corp is in News Now-a-days?

Focussing on simplification of the companyâs structure, News Corp has decided to review strategic options for its NAM (News America Marketing) business and reduced its capital expenditure forecast for the financial year 2020. The move was welcomed by investors who were worried over its struggling TV business Foxtel, resulting in a jump in share price by 7.5 per cent on 12th August 2019 on ASX.

The company also reported its full year and fourth quarter results for the fiscal year 2019 on 12th August 2019. News Corpâs revenue improved by 12 per cent in FY19 to $10.07 billion in comparison to the prior corresponding period. The company also recorded a net income of $228m against a net loss of $1.44 bn recorded last year. News Corpâs TV business, Foxtelâs capital expenditure was ~$302m in FY19 relative to $285m in the previous year. Due to a rise in capital expenditure, the company had less free cash flow available ($213 million) in comparison to FY18 ($249 million). 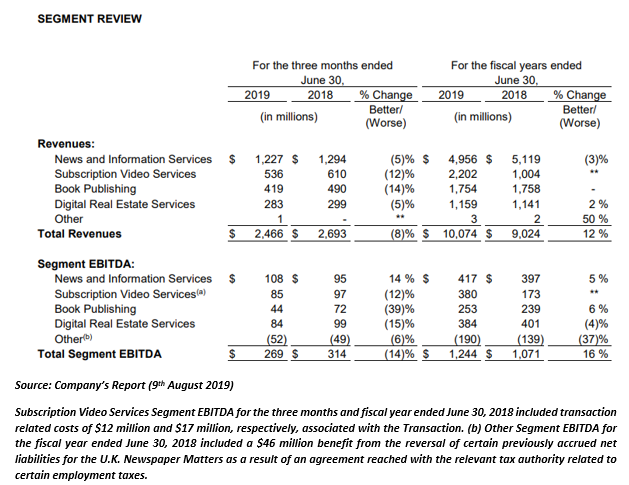 The fastest-growing outdoor media company in New Zealand and Australia, QMS Media Limited (ASX: QMS) specialises in offering impactful, innovative and engaging advertising solutions to its clients and agency partners across its premium outdoor media network. The company is determined to âswitching onâ the finest digital assets in the top locations.

Why QMS is in News Now-a-days?

The company has recently informed that its business division, QMS Sport has executed a conditional heads of agreement to acquire TLA Australia and, in turn, Stride Sports Management Holdings Pty Ltd businesses. The acquisition will be done at a total consideration of ~$32.7 million, representing ~5.3 times of CY2019 EBITDA, pre-synergies. The company expects the combined QMS Sport (including TLA) revenue in CY2020 to be at ~$133.6 million. The acquisition will be funded by $20m of QMS Media Limited debt finance and $12m unlisted equity raising. A combination of QMS Sport and TLA Australia will create an integrated sports platform providing a complete sport offering across technology, infrastructure and digital media.

The company announced its financial results for the six-month period ended 31 December 2018 in April 2019. QMS achieved solid statutory revenue growth of 9 per cent during the period at $107.6 million. The gross profit of the company also improved substantially by 11 per cent to $53.3 million. The Underlying EBITDA and NPATA were at $22.7 million and $13.5 million, respectively during the period. 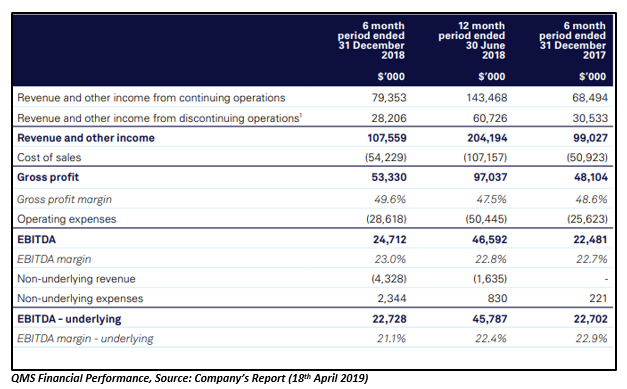 CLICK HERE FOR YOUR FREE REPORT!
Tags:
Blog
All pictures are copyright to their respective owner(s).Kalkinemedia.com does not claim ownership of any of the pictures displayed on this website unless stated otherwise. Some of the images used on this website are taken from the web and are believed to be in public domain. We have used reasonable efforts to accredit the source (public domain/CC0 status) to where it was found and indicated it below the image.