Let us have a look at the three key areas under predictions for the financial year 2020:

Overall, the Australian equity market looks expensive in 2019 ; the market has seen an equity surge this year, escaping the uncertainties surrounding the worst-in-a-generation housing slump, an inquiry into financial-industry misconduct and the federal election.

The S&P/ASX 200 Index has delivered a YTD return of above 15 per cent (as on 17th June 2019). The Australian equity market has become the second-best performer (year-to-date) among major stock markets in Asia Pacific after China. Few market analysts think that the current levels of Australian stocks are not sustainable. 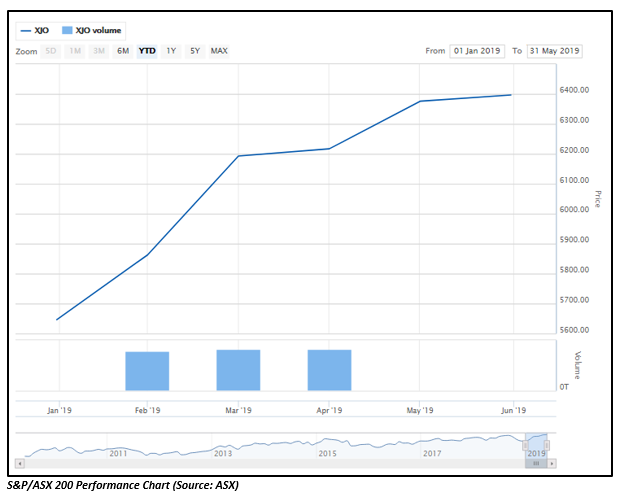 According to some market experts, the volatility is expected to remain higher in the Australian equity market in the financial year ahead due to an ongoing trade war between the two largest economies of the world – the United States and China.

The escalating trade tensions between the US and China had impacted the stock markets globally in the last few months. The imposition of trade tariffs by the US on Chinese imports is expected to put the global trade at risk.

In April, the International Monetary Fund had reduced its global growth forecast to the lowest level since the global financial crisis, down from January's prediction of 3.5 per cent to 3.3 per cent.

As anticipations over increasing trade tensions loom, the Federal Government is expected to undertake precautionary interest rate cuts soon. The Australian Government has already reduced its interest rates by 25 basis points in June this year. Certain market analysts believe that 2019 would be a year to invest in stocks as the expected easing of monetary policy would push the asset prices higher.

Some of the best-performing stocks trading on the Australian Stock Exchange include Z1P, APX, APT, VHT and A2M. The table below depict these stocks and their respective YTD return as on 17th June 2019:

However, they also believe that there might be a small growth in the house prices in the coming financial year owing to the recent step taken by the Australian Prudential Regulatory Authority (APRA) for housing market recovery. APRA has proposed for the removal of 7 per cent home loan buffer in order to benefit the new home loan buyers.

The other moves including further interest rate cuts by the Reserve Bank of Australia (RBA) and the miraculous win of the Coalition government are also expected to work in favour of rising housing prices. Australian banks have also started to lend more freely again after the banking royal commission final report indicated that there would not be any further pressure on the housing market.

A recently published data by the Australian Bureau of Statistics has shown that the value of lending commitments to households have advanced 0.6 per cent in April 2019 in seasonally adjusted terms, following a fall of 3.3 per cent fall in March. The rise in April 2019 was driven by an increase in owner occupier dwellings excluding refinancing (up by 1 per cent), and personal finance excluding refinancing (up by 4.3 per cent).

Some economists view this situation as a rebalance in the housing market with first-home buyers taking a greater share of the market.

Performance of the Australian Property Market in March Quarter 2019

The Australian Bureau of Statistics released the data on the property prices of Australia in March quarter 2019 today. The data indicated a fall in property prices across all the capital cities in Australia during the quarter, with the largest fall observed in the two biggest property markets – Sydney and Melbourne.

During the quarter, the prices of the residential property saw an overall fall of 3 per cent relative to the decline of 2.4 per cent in the previous quarter. Property prices declined the most in Sydney (3.9 per cent), followed by Melbourne (3.8 per cent).

The table below summarises the percentage change in property prices across the Australian capital cities in March quarter 2019 relative to the last quarter:

Recently, a property consultant also released Home Value Index data for May 2019, that indicated a slowdown in the rate of decline in property prices with a mild recovery in Sydney and Melbourne.

The Reserve Bank of Australia recently cleared the speculations over the interest rate cut doing rounds for quite a long time, announcing a reduction of 25 basis points in the official cash rate in June this year. RBA took the interest rates to a new low of 1.25 per cent from 1.5 per cent in order to support the employment growth and achieve the inflation target.

The bank held the interest rate steady at 1.5 per cent in May despite strong anticipation of a rate cut. However, the rising unemployment figures reported in April along with the disappointing inflation data in the March quarter had put pressure on the RBA to slash the interest rates.

The money market experts are now predicting two more interest rate cuts over the next year. In a report recently released by the National Australia Bank Limited (ASX: NAB), the bank has indicated that it is expecting a cash rate cut by the RBA to 0.75 per cent in November 2019. Few analysts expect further rate cuts in future but do not anticipate a significant improvement in GDP growth.

The RBA has also signalled for a further decline in interest rates today in its June meeting. The bank stated that a further fall is required to stimulate the economy and employment. Australia's central bankers have commented that further rate cuts appear more likely than not. The minutes of RBA’s June meeting stated that a further easing in monetary policy would be appropriate in the period ahead given the amount of spare capacity in the labour market. The board has also suggested for quantitative easing as an alternative monetary policy stimulus.