Travel companies across Australia have witnessed a significant rise, given their increased domestic demand. With the sort of progression being made in the market with time, travelling appears to be a dire requirement in everybodyâs day-day life.

Letâs delve into the 4 travel stocks listed on the ASX as follows:

Incorporated in 1996 and formerly known as the Sydney Airport Holdings Limited, Sydney Airport Limited (ASX: SYD) is part of the industrials sector and deals with the airport operations.

On 24th May 2019, the company updated on the SAT1 indemnity related to historical investments. The ECJ decisions after the companyâs release of its December financial report have driven towards a reconsideration of the status of indemnities given by SAT1 related to its 2011 sale of Copenhagen Airport.

It had been assessed that some or total worth $119.1 million non-current receivable in the Report, that had been previously paid may need to be expensed. Besides this, any future call is likely to occur on its indemnities, up to a maximum of $61 million as at 30th June 2019.

The company stated that the indemnities, even if expensed and/or fully called would have no material impact on its Net Operating Receipts in 2019 or later, nor would impact distribution guidance of 39c per stapled security for 2019.

The company released its Annual General Meetingâs presentation on 24th May 2019. In the presentation, SYD reaffirmed its 2019 distribution guidance, 39.0 cents per stapled security which would most likely be more than fully covered by Net Operating Receipts.

SYD would mostly begin to pay cash income tax from the 2022 calendar year, depending on the underlying operational performance and capital investment opportunities. The three-year capex guidance for 2019-2021 is between $0.9 billion and $1.1 billion. The 2019 capex guidance ranges between $390 million and $440 million.

Flight Centre Travel Group Ltd (ASX: FLT) is one amongst the largest travel agency groups in the world. With operations in 23 countries, FLTâs corporate travel management web is spread out in ninety plus countries. The company has more than 40 brands.

The company amended its FY19 fiscal year profit guidance. On 26th April 2019, the company announced that its PBT for the 12 months till June 30th, 2019 would most likely range between $335 million and $360 million. This guidance is below the range of $390m and $420m that FLT had targeted originally in its market guidance provided in October last year.

In its Morgans Roundtable Presentation released on 10th April 2019, the company stated that in FY19, it would continue to focus on its Australian leisure business to better the margin and increase slow cost growth and TTV after a challenging first half. Besides this, the focus would be to grow in North America business. 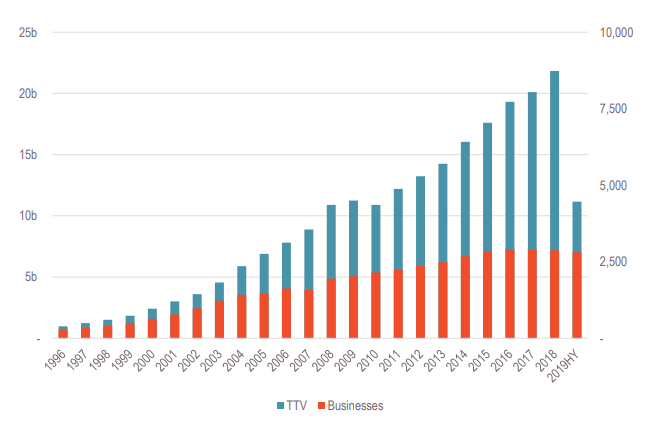 A global provider of cost-effective and innovative travel solutions, Corporate Travel Management Limited (ASX: CTD) deals with events, loyalty, corporate, leisure and wholesale travel solutions. The company was established in 1994 in Brisbane and has hence been operational for over 25 years. It has offices in Asia, Europe, Australia, North America and New Zealand.

On 23rd May 2019, the company notified that it was broadening its senior management expertise to support business development, in line with the growth strategy stated before to the market. Specifically throwing light on the same, its Global CFO, Steve Fleming, would directly focus on CTDâs growing operations in Europe. Meanwhile in Australia, the company is en route to recruit a new Global CFO to support the Board and global management team.

In line with the above, the company had appointed a new Chairman on its Board, Mr Ewen Crouch w.e.f. 25th March 2019. He replaced Mr Tony Bellas post retirement.

On 20th March 2019, the company published its Investors Presentation and showcased its upward moving growth profile of TTV (Total Transactional Value). Since IPO, it had grown over 18-fold in 9 years. 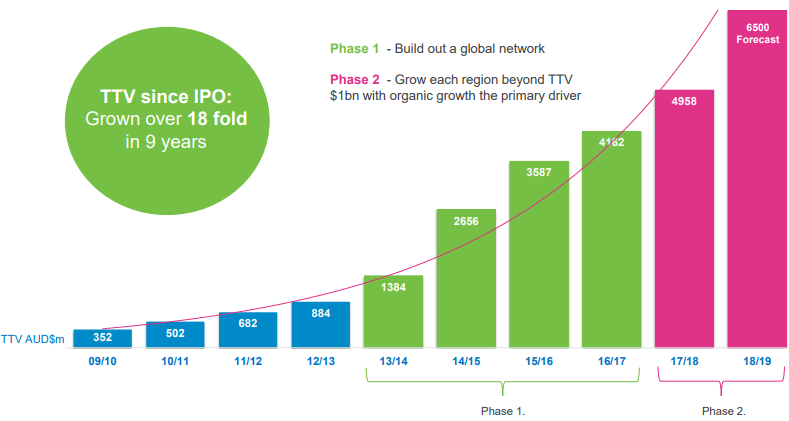 The company has been moving towards building a fruitful global business and has been generating majority of its profits from offshore. The below image is a depiction of the companyâs 1H Underlying EBITDA by region, before global overhead costs:

The company has been granted multiple awards for its high-quality model offshore. Few of these are discussed below:

As part of its growth strategy during FY14-FY21, the company would have three distinct strategic growth phases. Phase 1 would be Establishing a global network through acquisition targeted fot FY14-17. Phase 2 would be to aim towards growing each region beyond TTV$1bn+ with organic growth being the primary driver, targeted for FY18-19. The Phase 3 strategy would aim towards realising the potential created in Phase 1 and 2 to grow organically at optimum levels, which has been targeted for FY20-21.

Established in 1998, Webjet Limited (ASX: WEB) is one of the leading online travel agency. It deals with online travel tools and technology and focusses on online innovation. It has both B2C and B2B divisions. It is the worldâs first ever Travel Services Aggregator technology, which resulted through its blockchain innovation. The company made the acquisition of Online Republic in 2016 to pace up its core competencies into lucrative complementary travel sections.

On 14 April 2019, the company released its presentation for JP Morgan Emerging Companies Melbourne Conference. It stated that its B2B hotel division, WebBeds which was launched in 2013 is the worldâs second largest and fastest-growing accommodation supplier in the travel space, reporting in 3 regions- AMEA, Asia Pacific and Europe.

The WebBeds FY22 target is to deliver â8/4/4â which infers to 8% revenue/TTV and 4% costs/TTV to drive 4% EBITDA/TTV. The below image depicts the WebBeds clients: 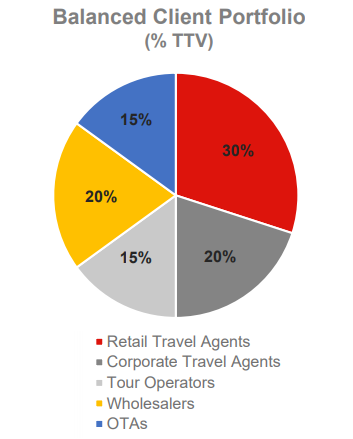