Neobank is the new generation bank that provides end-to-end banking services to customers. With the help of technology, these banks operate digitally without any bricks and mortar presence. A neobank provides all the banking experiences like offering a savings account, transactions from the account and granting loans. All the above facilities are offered through digital media.

Five Features of Neobanks in Australia:

Few Neobanks across Australia to look at:

Xinja Bank is a 100% digital bank, designed to cater to customers who prefer mobile banking over traditional banking. The bank has more than 12,000 prepaid card users, with these cards being used in an average of 17 countries on a daily basis. More than 28,000 customers have signed up for the Xinja platform.

On 9 September 2019, the Australian Prudential Regulation Authority (APRA) announced the grant of full banking licence to Xinja Bank. Earlier, during December 2018, the bank was given a restricted banking license and was suggested to work closely with the regulators for the full licence.

Xinja has opened transaction accounts to early customers that can be accessed through the mobile based Xinja app. A Xinja Debit MastercardÂ® is offered along with the transaction account. The bank is set to launch savings accounts in coming days. Additionally, the bank is planning to launch its lending products in 1Q20, as indicated by the management. 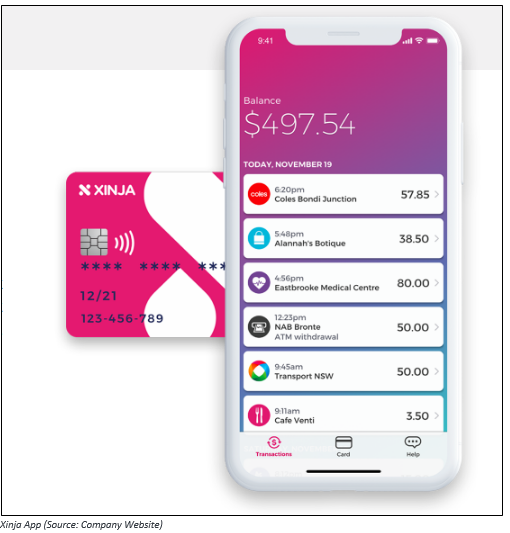 The new technology programmed by Xinja Bank is designed for prompt services and flexible operations. As per the management, the platform would rapidly introduce additional services to the customers.

The cost advantages of Xinja over the traditional banks are more. According to the management, the use of technology and the absence of traditional brick and mortar model is helping the company to save overall costs. The company promises to disburse loans faster than conventional financial institutions.

Xinja would remain aloof from credit cards because the company wants to establish as a financial instructor to the customers. The current model of the bank emphasises on offering higher returns to loyal customers and give priority to relationships with the customers.

86 400, supported by Australiaâs largest independent payments company Cuscal, is another neobank in Australia, which went live on 10 September 2019, launching pay and save accounts.

The bank had received full licence from the Australian Prudential Regulation Authority (APRA) in July 2019, enabling it to operate as an authorised deposit-taking institution (ADI), indicating that there will be no bar on the savings account and the company can receive unlimited deposits from the customers. Additionally, deposits of a maximum of $250,000 each customer are guaranteed under the Financial Claims Scheme of the government.

For the last two years, the company has been focused on creating best possible banking services that it can offer to its users. The company went through several testing methodologies on its upcoming products and services prior to the launch.

The bank would offer a transaction account and a savings account with an interest rate of 2.5% on a deposit of $1000 on a monthly basis. The app-based bank has several enhanced features like fingerprint and facial recognitions and would have features like reminder upcoming bills and instant transfers in the near future.

As per the management, this class of banks (neobanks) deliver cheaper and faster banking services to the customers. The overheads of app-bank banks are expected to remain lower, indirectly resulting in more savings to their respective customers. According to 86 400, due to technological help, these app-based banks are expected to work faster than the conventional banking system.

Volt Bank has also secured the full banking licence from APRA, which guarantees that the deposits of the bank up to $250,000 are secured, owing to guarantee by the Australian governmentâs financial claims scheme (FCS).

The bank is yet to roll out publicly and is planning to launch its savings app in the coming months. The company is focusing on building a platform, through which it plans to offer several services to customers, enabling them to make most of their money.

In October 2018, Volt reached a deal with global payment giant Paypal, aimed at helping the former to offer its users an easy sign in process. The deal would help the company to access Paypalâs wide customer base of over 7 million. Additionally, debit cards and credit cards issued by Volt customers would be automatically linked with Paypal.

The collaboration would lead to less paperwork and would help new clients in opening an account, providing them with a pleasurable onboarding experience. However, Volt is still required to adhere to the identification guidelines by the AUSTRAC (Australian Transaction Reports and Analysis Centre) to prevent money laundering and fraud.

The company has built an application known as Volt Labs, where all the ideas are shared and tested to support building Volt Bank.

With Xinja Bank and 86 400 starting to offer their services as neobanks or digital banks with no physical presence, it seems Australians would soon have access to cheaper, faster and smarter banking services.

CLICK HERE FOR YOUR FREE REPORT!
Tags:
VOLT BANK 86 400 Xinja Bank Neobank
All pictures are copyright to their respective owner(s).Kalkinemedia.com does not claim ownership of any of the pictures displayed on this website unless stated otherwise. Some of the images used on this website are taken from the web and are believed to be in public domain. We have used reasonable efforts to accredit the source (public domain/CC0 status) to where it was found and indicated it below the image.