The stocks of oil companies moved up after the drone attack that affected almost half of Saudi Arabia’s daily crude production. The drone had attacked Saudi Arabia’s oil production facilities located in Abqaiq (world’s largest oil processing facility and crude oil stabilisation plant that can process more than 7 million barrels per day) and Khurais, which is claimed by Yemen’s Houthi rebels. The attack affected about 5.7 million barrels of daily crude production, which is approximately 50% of the Saudi Arabia’s oil output. This forms above 5 percent of the world’s everyday oil production. However, Saudi Arabia’s biggest oil entity Aramco is making its attempt to restore approximately a third of its crude output after the attack.

Meanwhile, the rise in oil prices is not expected to be sustained as U.S. President Donald Trump has said that it will release oil from America’s strategic petroleum reserve if the need arises.

On the other hand, the market is also affected by the Reserve Bank of Australia’s decision to cut its cash rate by a quarter point to a fresh new record low of 0.75 percent. This decision was anticipated by the market.

Let’s have a look at the 5 oil stocks, with strong presence in energy sector.

Raised 5 Year Target On the back of Strong FY 19 Performance:

Beach Energy Ltd (ASX: BPT), one of the strongest performers on ASX in 2019, in fiscal 2020 is targeting 194 wells and the company’s focus is on Cooper Basin and Otway Basin. This reflects a growth of 45 percent from FY19 period. The company expects that 90% of growth projects will start in FY20, which is projected to deliver IRRs of more than 50%.

Anticipates producing over 5 petajoules of gas and about 240,000 barrels of oil in FY 20:

Cooper Energy Ltd (ASX: COE) has recently, on 17 September 2019 notified the market that it received the permit for six-year term to explore offshore Victoria at VIC/P76 located in the Otway Basin. This area is surrounded by gas fields and adjoining Annie-1 gas discovery. The permit covers the area that has good quality 3D seismic data, including Nestor, which have many similarities to the Annie gas discovery. The area is at the proximity to their existing pipelines and also has the access to the Minerva Gas Plant.

On the other hand, for FY 19, the company has reported statutory net loss after tax of $12.1 million compared to net profit after tax of $27 million, that had included significant items of total of $17.2 million. However, for FY 19, the company posted 36% rise in Underlying profit after tax to $13.3 million & 1% increase in Underlying EBITDA of $32.9 million with 28% growth in Gas sales revenue. The company during fiscal 2020 expects to produce over 5 petajoules of gas and about 240,000 barrels of oil. 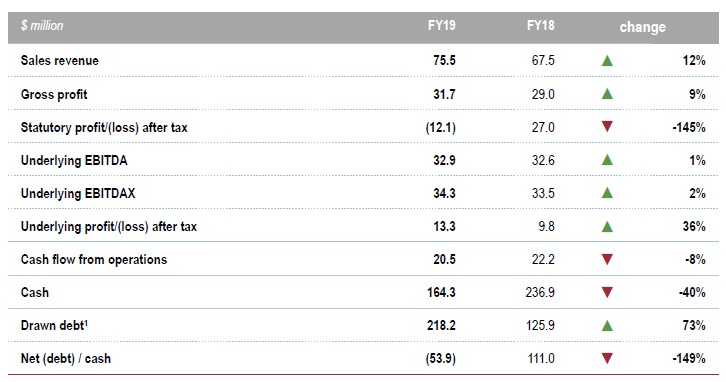 Woodside Petroleum Limited (ASX: WPL) witnessed first oil from The Greater Enfield Project, which is a JV or joint venture among Woodside Energy Ltd (Operator, 60 percent) and Mitsui E&P Australia Pty Ltd (40 percent). The company had invested approximately US$1.9 billion in this project. The company is aiming to generate around 100 MMboe in 2020 period.

For 1H 2019 period, WPL had reported the net profit after tax of $419 million compared to $541 million in the corresponding period previous year, on the back of cyclone activity and the Pluto LNG turnaround. However, during 1H 2019, there has been 123% rise in the free cash flow to $869 million and the company generated $1,485 million of cash flow from operating activities.

On the other hand, PNG Government concluded the overall evaluation of the Papua LNG Gas deal.

For 1H 2019 period, OSH has reported 37% rise in sales volume to 13.4 mmboe & 105% rise in the net profit after tax to $161.9 million. Operating cash flows during 1H 2019 rose by 72 percent, on the back of elevated sales and average realised LNG and gas prices in 1H19 period, which was partly compensated by rise in production costs. The company’s net debt fell 15 percent driven by US$3,048 million continuing refund of PNG LNG project debt.

Origin Energy Ltd (ASX: ORG) recently updated the market that two Petroleum Lease Applications (PLA) were lodged by the Mahalo Joint Venture (MJV) which will lead to the initial development area for the Mahalo Gas Project. The whole procedure would be handled by DNMRE, as an initial move taken, in the procedure for the developers of gas fields for the shorter-term exploration tenure to get converted into much longer-term development tenure.

On the other hand, for fiscal 2020, the company expects (Energy Markets) Underlying EBITDA to be in the range of $1,350 - $1,450 million. During fiscal 2020, the gross profit of the natural gas portfolio is projected to remain stable, though electricity gross profit will fall. APLNG or Australia Pacific LNG’s production in FY 20 is expected to be in the range of 680 to 700 petajoules. APLNG breakeven is projected to range between US$33 and US$36 per boe.

In FY 20 period, corporate costs are projected to be in the range of $70 to $80 million. Capital expenditure and investments, excluding APLNG, is expected to be in between $530 to $580 million.