5 Much Talked About Stocks When It Comes to Dividends: TLS, SSM, SOL, ANZ, WAM

Companies have the option of whether to re-invest their profits in the business or pay a part to their shareholders. The amount paid out of the profits to shareholders as a reward for their confidence and loyalty towards the company is known as dividend.

In general, Board of Directors (BoD) of a company makes the final decision regarding how much dividend would be paid to the shareholders. The major portion of the company’s profit is kept with them for their ongoing and future business activities, while the remaining amount is allocated to their shareholders as dividend, and are paid on a scheduled frequency, like annually, quarterly or monthly.

Usually, best dividend players are the companies with large-market cap, owing to the fact that they have more predictable profits, and they seek to boost the wealth for their shareholders. For high growth and start-up companies, it is difficult to make dividend payments, as they require the funding for growth opportunities in the future.

Let’s have a look at five good dividend paying stocks listed on ASX.

A technology and telecom company, TLS, in addition to offering a wide range of telecom and information services, provides mobiles, pay television and internet.

On 13 February 2020, Telstra released its half year results for FY2020 ended 31 December 2019, which are in line with guidance and market expectations.

According to Telstra CEO Andrew Penn, the company’s performance during the first half reflects that the T22 strategy was building value and resulting in positive financial momentum.

SSM is a provider of essential network services to the telecom and utility sectors, engaged in service management across all territories and states, aided by a staff in surplus of 2,200 people and access to a group of more than 3,000 expert contractors.

The company has released its financial results for the half-year ended 31 December 2019. Key highlights of the result: 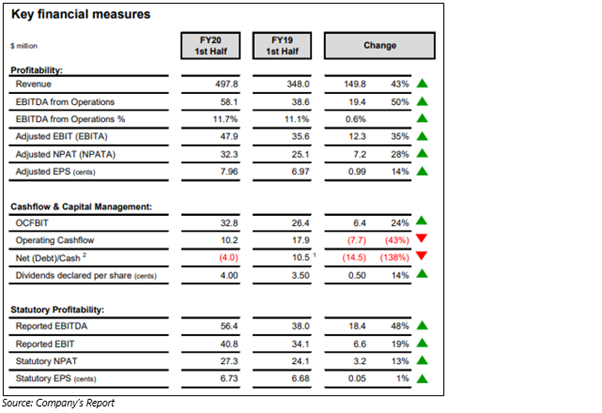 SOL is engaged in the ownership of shares, in addition to Au and Cu mining & refining, and coal mining. The company also provides services related to property investment and consulting.

More on the company’s results can be read here.

ANZ is a provider of banking and financial products and services, catered towards individuals as well as business customers.

The bank reported statutory profit for the full year of $6 billion, down by 7% due to lower interest rates, intense competition and slower credit growth. The cash profit for the year stood at $6.5 billion, no change as compared to previous year.

On the positive note, cash earnings per share grew by 2% to 228 cents, mainly due to the capital management actions taken in past years. The bank paid final dividend of 80 cents per share, franked at 70%, taking the whole year dividend to 160 cents, mainly because of strong capital ratios.