The 52-week high/low of a stock price is defined as the highest or lowest price at which it traded during the last one year to date. As a company’s stock price trades around its the 52-week high, it may spark an additional interest amongst the investors. It is also used by some investors as a technical indicator in determining the stock's current value as well as gives a clue about the expected future price movement.

Let’s look at the following 5 ASX-listed stocks that are trending around their 52-week highs.

Q1 FY20 Results: During the quarter ended 30 September 2019 (Q1 FY20), Qantas Group continued to deliver a good performance with total revenue up by 1.8 per cent to a record $ 4.56 billion, demonstrating an increase from $ 4.49 billion recorded in the prior corresponding period (pcp). The first quarter performance was primarily driven by the strong Qantas International business.

For the concerned period, the unit revenue of the Group improved by 2.1% as compared to the prior corresponding period (pcp) while the total Group capacity decreased by 0.2%, mainly due to the decrease of 0.6% for Group International and increase of 0.5% for the Group Domestic largely due to resources market growth.

Segment wise, there was a drop of 0.9 % in the Group Domestic Unit Revenue amidst mixed market conditions. The traffic from Resources industry remained strong, which largely contributed offsetting weaker demand in other parts of the corporate sector such as telecommunications and financial services.

Overall, the corporate travel demand remained stagnant and there was a slowdown in small business travel demand growth. Regardless, the Group’s market share in both these segments continued to increase. In addition, the Group witnessed a slowdown in premium leisure demand and demand in the price sensitive leisure market weakened.

National Storage REIT is a fully integrated and one of the first independent and internally managed provider of self-storage centres in both Australia and New Zealand. It is the first of its kind to be listed on the ASX and has around 168 centres with tailored storage solutions that are utilised by more than 60,000 commercial and residential customers.

FY19 Results: For the year ended 30 June 2019, National Storage delivered a strong result with A-IFRS profit after tax of $ 144.8 million as the company continues to follow up on its growth strategy. A record number of acquisitions were executed in FY19 by NSR, including 35 centre acquisitions and 4 new development sites settled, all valued at over $ 400 million in total. 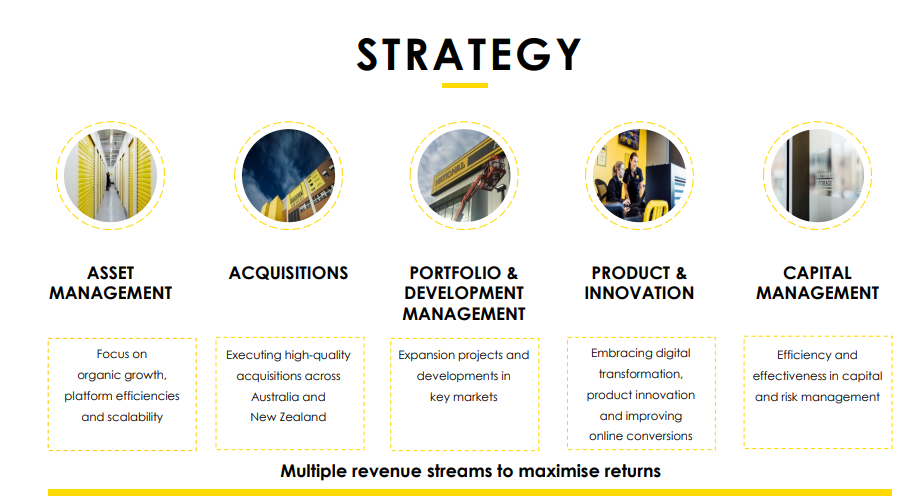 The underlying earnings for the period increased by 21% to $ 62.4 million while NSR now has a total of $ 1.95 billion of assets under management, an increase of 36% on FY18, that has reinforced its position as the largest self-storage owner-operator in Australasia.

Despite challenging economic conditions in some regions, NSR’s organic occupancy growth of 1% was achieved in both Australia and New Zealand, taking its Australian portfolio occupancy to 81.4% and New Zealand to 85.7%.

Australia-based Ansell Limited is one of the world’s leading provider of health and safety protection solutions that are aimed at improving well-being of people. The company engages in R&D and investment into manufacturing and distribution of cutting-edge product innovation and technology.

FY19 Results: For the year to 30 June 2019, Ansell recorded 0.6% increase in sales of $ 1,499 million from continuing operations while organic sales were up 1.9% in constant currency. There was a 4% growth in organic sales while industrial growth remained subdued due to softness in the Europe market.

During FY19, the company deployed $ 43.5 million in net capital expenditure to enable continued growth and competitiveness. Going into FY20, the company estimates the spend will reach around $ 65 million to $ 75 million with advancement in the Thailand plant expansion and other strategic investments to drive the market leadership.

CSL Limited, headquartered in Parkville, Australia, is engaged in R&D, manufacturing, commercialisation and distribution of cutting-edge biopharmaceutical products in Australia as well as globally. The company’s two operating business units are CSL Behring and Seqirus.

FY19 Results: The financial year ended 30 June 2019 proved to be a strong period for the company as it reported NPAT of $ 1,919 million, up 17% on a Constant currency basis (CC) and revenue up 11% at CC, demonstrating continued strong growth in immunoglobulin and albumin therapies, high demand from patients for specialty products Kcentra and Haegarda, successful evolution of the haemophilia therapies portfolio, and Seqirus business delivering in line with strategy, reflecting strong growth in profit.

Australian Retail giant, Wesfarmers Limited was established in 1914, and operates diverse businesses such as coal mining and production, industrial and safety product distribution, gas processing and distribution, chemicals and fertilizers manufacturing, and others in Australia and internationally.

With the completion of the acquisition, Wesfarmers now holds a 50% stake in the Mt Holland lithium project located in WA in joint venture with Sociedad Quimica y Minera de Chile S.A., one of the world’s largest producers and marketers of lithium products.