A growth stock is generally referred to a share of a company which is expected to witness a growth at a higher rate in comparison to the market average. These types of stocks do not usually provide a return in the form of dividends. These companies generally reinvestment their earnings in order to accelerate revenue and earnings growth in the future. In the article below, we will be digging into five ASX-listed growth shares with their recent updates:

Dubber Corporation Limited (ASX: DUB) is into provisioning of call recording and audio asset management in the cloud.

The company, through a release dated 30th August 2019 updated the market participants with its results for the year ended 30 June 2019, wherein it mentioned the following key points: 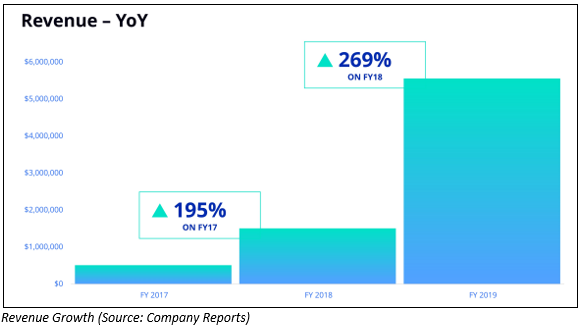 Nanosonics Limited (ASX: NAN) is primarily in the manufacturing and distribution of the Trophon® ultrasound probe disinfector and its associated consumables as well as accessories.

A look at Directors Interest

The company has released a series of announcement stating the changes made by directors in their holdings:

In order to fulfil the terms of Nanosonics Omnibus Equity Plan as well as the Nanosonics Employee Share Option Plan, NAN has issued 346,640 fully paid ordinary shares on exercise of 286,556 performance rights and 60,084 options. The total consideration was $171,239.40 The Securities have been issued on 17th September 2019.

On 16th October 2019, the company has issued 49,998 fully paid ordinary shares at the issue price of $16.96 per share. It was mentioned that the shares have been issued upon exercise of 49,998 options, which was issued to senior executives of APT under its Plan.

The company through a release announced that it would be conducting its 2019 Annual General Meeting on 13th November 2019 and following will be the key business items:

For the full year ended 30 June 2019, the company reported underlying global sales with a rise of 140% and the figure stood at $5.2 billion. At the end of FY19, active customers reached 4.6 million, reflecting an increase of 130%. On the operational front, the company entered into a strategic partnership with VISA in order to underpin future expansion as well as platform innovation in the United States.

Megaport Limited (ASX: MP1) is mainly into the provisioning of on-demand elastic interconnection services as well as internet exchange services.

In the upcoming years, the company would be focusing on an aggressive global expansion strategy while continuing to innovate the product set in order to maintain its first-mover advantage as well as to deliver greater value to customers and partners.

PolyNovo Limited (ASX: PNV) is involved in the development of innovative medical devices for numerous applications. The company utilizies NovoSorb®, which is a patented bioabsorbable polymer technology.

In the recent release, the company stated that it would be holding its 2019 Annual General Meeting on 15th November 2019 and following will be the key resolutions:

A look at Pivotal Trial