Mining refers to the extraction of valuable minerals from the core of the earth. It is one of the primary sectors in Australia and contributes toward the growth of the country in terms of export income, royalty and by providing employment. Several mining booms increased the investment in mining and led to higher incomes from mining activities and more immigration to Australia.

Let us now have a look at few stocks in the mining industry.

Regis Resources Limited (ASX: RRL) is a mining company engaged in the production of gold from the Duketon Gold Project, as well as exploration, evaluation and development of gold projects in Eastern Goldfields of Western Australia and Mcphillamys Gold project in New South Wales.

Sale of Gold Tenements to Regis for $25 Million:

The company entered into an agreement with Duketon Mining Limited to acquire a strategic package of tenements from the Duketon project for $25 million in cash. The retained nickel rights area with Duketon Mining represents over 30% of the previous granted tenure held by Duketon.

Outlook: The company is expecting to register gold production of 340,000 - 370,000oz at $1,125-$1,195/oz AISC. RRL is also anticipating growth of 10% in production by the year 2022 and is planning to take a potential production step at McPhillamys Gold Project and Discovery Ridge. Regis is also expecting to increase the production at Duketon and start the early stage testing at Gloster UG and Regional Exploration across the belt. 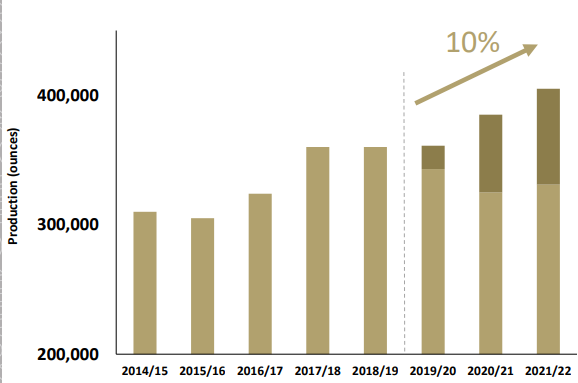 The company released a report on identified mineral resources and ore reserves for the Tomingley Gold Operations; Peak Hill Gold Project; and the Dubbo Project in the Central West of New South Wales as at 30 June 2019.

Roswell and San Antonio Resource Definition Drilling Update: The resource definition drilling program on the San Antonio and Roswell prospects was started in the month of June 2019, for which assay results have now been received for the second 5,000 metres. The program is part of an extensive regional exploration program.

Pantoro Limited (ASX: PNR) is engaged in the business of gold mining, processing and exploration at the Halls Creek project in Western Australia.

Appointment of Non-Executive Director: The company appointed Mr Wayne Zekulich as an independent non-executive director of PNR, according to a market update on 2 October 2019. However, the appointment is subject to approval by shareholders at the company’s annual general meeting scheduled in the month of November 2019.

Additionally, the company has hired some key senior personnel, aimed at progressing the development activities at the Norseman gold project in line with the plans while maintaining production activities at the Halls Creek project.

Breaker Resources NL (ASX: BRB) is a mining company carrying out exploration activities on its tenements in Western Australia with the objective of identifying gold and other economic minerals deposit.

The company is scheduled to hold its annual general meeting on 21 November 2019, during which several business aspects would be discussed, including BRB’s 2019 financial report. Following resolutions would also be considered during the meeting.

Corporate and Operations Update: The Board decided to undertake a strategic review of all options to accelerate value from the Lake Roe Gold Project. The Review focuses on maximising shareholder value and aims to lay a platform for a significant step-up in drilling activities to increase the current 1.0Moz Resource.