As a matter of luck, Australia has an abundance of raw minerals existing underneath its soil. The mining industry has remained a significant primary industry contributing towards the wealth of the nation. Australia produces about 19 minerals in considerable amounts from around 400 operating mines. It is among the worldâs top mineral producers, having a considerable resource inventory of key minerals commodities. The commodities produced in Australia include bauxite, iron ore, rutile, gold, lead, lithium, manganese ore, uranium, black coal and many others.

The Australian economy also generates a substantial amount of export income from mineral exports. The Department of Industry, Acknowledgements Innovation and Science, in its report âResources and Energy Quarterly March 2019â, mentioned that Australiaâs resource exports are expected to touch a new record of $278 billion in 2018â19. However, the resource and energy export values will fall back over the next five years after 2018â19, as indicated in the figure below: 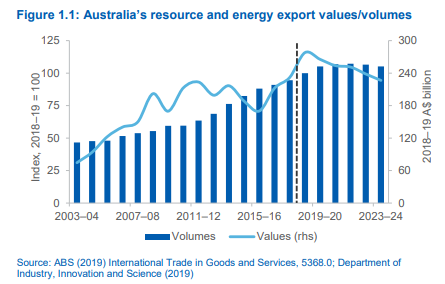 The report stated that the investment in the mining sector is recovering after years of decline. The investment in Australiaâs mining industry fell by 6 per cent to $36 billion in 2017â18 relative to 2016â17. However, there was a potential recovery witnessed in investment in December 2018 quarter.

Let us now have a look at three of the Metals and Mining companies that are listed on the Australian Stock Exchange - Western Areas Limited (ASX: WSA), Galaxy Resources Limited (ASX: GXY) and Orocobre Limited (ASX: ORE).

But why are we focussing on only these three companies? The reason is that the stocks of these companies have followed an oscillating trend in 2019; neither rising nor falling continuously. Investors might be interested in knowing more about these stocks due to their differentiated pattern.

Take a look at the trend of these three stocks on a YTD basis:

Now, let us know more about each of these ASX-listed stocks:

In a recent update, the company released the assay results for Phase 1 of the 2019 drill programme at the Mt Alexander Project. The assays confirmed the thick intersections of high-grade nickel-copper cobalt-PGE sulphide mineralisation at the project. The drill results are as follows:

The company owns 25 per cent interest in the Mt Alexander Project (situated near Leonora in the North Eastern Goldfields) which is held by the company in Joint Venture with St George Mining Limited.

In March this year, the company informed about the continuation of strong results from the drill programme at the Mt Alexander Project. A new and wide zone of nickel sulphide mineralisation has been identified by the company through extensional drilling. Also, the two drill holes - MARC094 and MARC093 - have been completed at the new Fairbridge Prospect, as shown in the figure below: 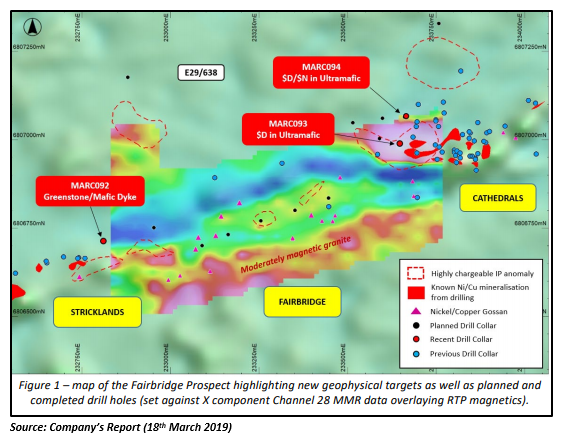 In its recently released quarter report for the March quarter 2019, the company reported significant improvements in both the cost of production and the grade of ore mined. The average mined grade across the Forrestania operation improved during the period, leading to a nickel production of 6,066 nickel tonnes in ore. The production from the Flying Fox and Spotted Quoll was reported at 56,386 tonnes of ore and 85,209 tonnes of ore, respectively. 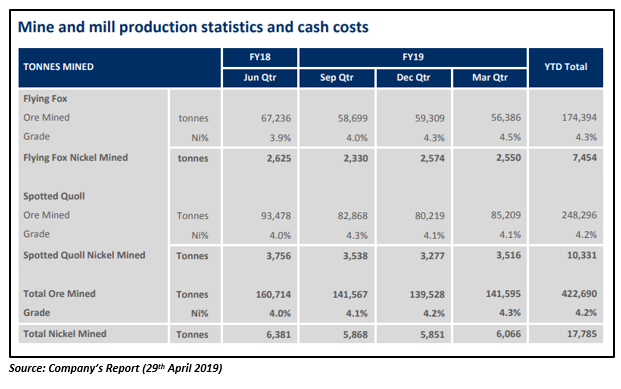 On 20th February 2019, the company announced its financial results for the half year ended 31 December 2018. The company reported an increase in its sales revenue by 7 per cent to A$123.7 million due to higher realised nickel price (pre?payable) of A$7.45/lb. The balance sheet of the company stood strong with no debt and a cash balance of $134.3 million. 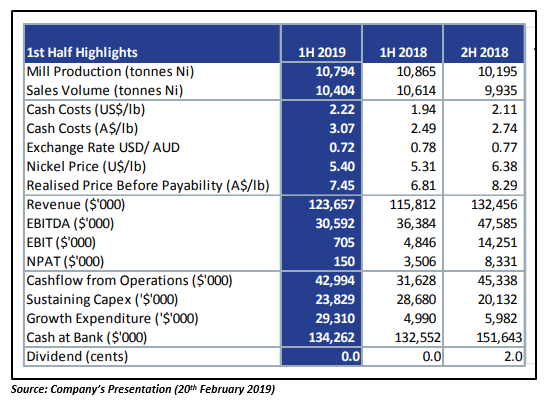 The companyâs stock is trading lower on the ASX as on 4th July 2019 (1:14 PM AEST) at A$1.910, down by 1.8 per cent relative to the last closed price. The market capitalisation of the stock at the time of writing the report valued at A$532.05 million. The stock has delivered a return of 2.37 per cent on a YTD basis. However, it has generated a negative return of 44.59 per cent in the last one year.

Recently, the company provided an update on its Mt Cattlin shipment guidance for Q2 2019. The company informed that it has completed two shipments amounting to ~30,000 dry metric tonnes to date in Q2 2019. Also, the 3rd shipment of 15,000 dmt, that was likely to leave from Esperance port before the end of the 2nd quarter, has been delayed.

In an announcement on ASX, the company reported that the Mt Cattlin Project delivered a record monthly production volume of over 21,000 dry metric tonnes (dmt) of lithium concentrate for April 2019. The average final product grade also improved from 5.75 per cent Li2O in Q1 of 2019 to 5.92 per cent Li2O in April 2019. The strong production results indicated the robust operational execution and enhancement in performance post the completion of the Yield Optimization Circuits in Q1 2019. 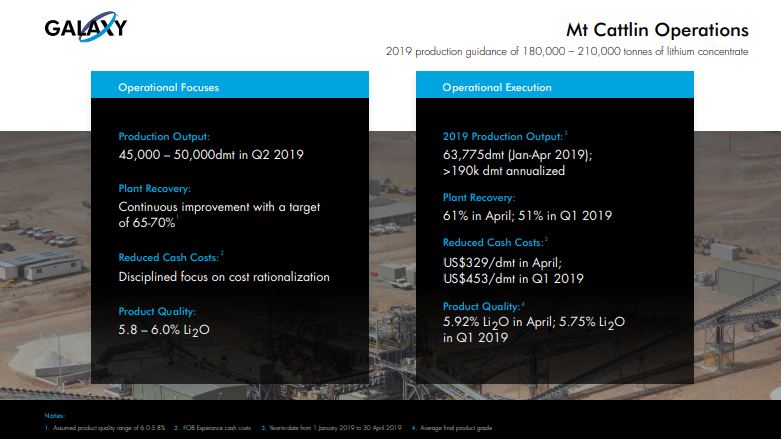 On 28th February 2019, the company released its financial results for the full financial year ended 31 December 2018. The Revenue from operations reported a rise of 60 per cent to US$153.9 million during the period in comparison to FY2017. The Group EBITDA from operations also improved by 90 per cent compared to FY2017 to US$58.1 million. The âGroup net profit after taxâ and âGroup net profit after tax from operationsâ stood at US$150.2 million and US$3.5 million, respectively during FY2018. 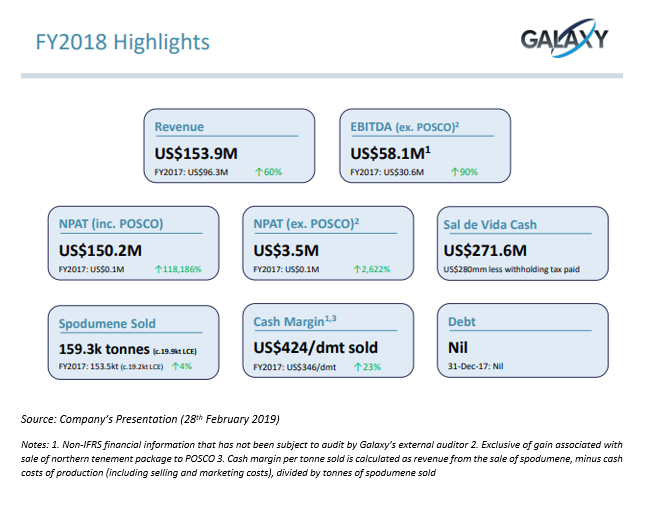 The company informed about the approval of Naraha Lithium Hydroxide Plant on 12th April 2019. It was reported that the Joint Venture boards, Orocobre and TTC (Toyota Tsusho Corporation) have approved the Final Investment Decision (FID) for the plant that was to be built in Japan. The company stated that it holds 75 per cent economic interest in the project, and the operations will be managed by Toyota Tsusho Corporation.

The company released a consolidated financial report for the half-year ended 31 December 2018 on 22nd February 2019. Orocobre reported a net profit after tax of US$24 million in H1 FY19 against US$8.2 million declared in the previous corresponding period. The company informed that the total production of lithium carbonate was recorded at 6,075 tonnes during the period. The half-year revenue stood at US$63.5 million on sales of 5,163 tonnes of lithium carbonate. 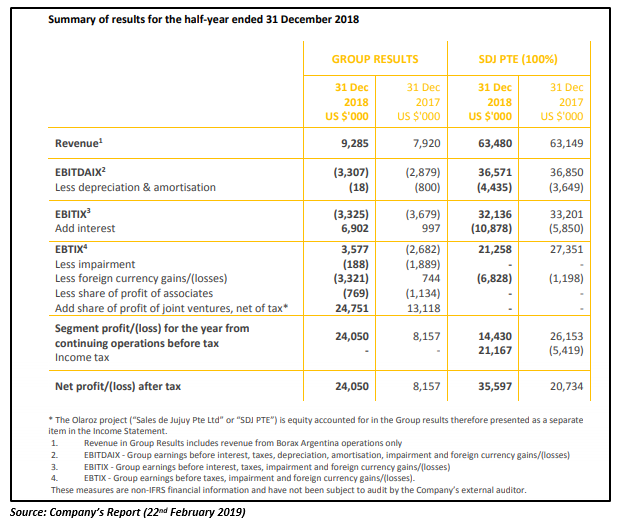