In this article, we would discuss three hemp stocks - ECS Botanics Holdings Ltd, THC Global Group Limited and Creso Pharma Limited. Let us have a look at the recent updates and performance of these stocks on the Australian Securities Exchange.

ECS Botanics Holdings Ltd (ASX: ECS), which is one of the largest players in the Australian hemp market, is focused on retail as well as wholesale hemp food products. The company has filed applications with the Office of Drug Control to secure medicinal cannabis licences, though they are yet not granted. If secured, the licences would form a non-core complementary facet to the companyâs business.

New Investment: ECS updated the market on 13 August 2019 about a strategic investment into a grain handling, marketing, storage and export packing facility, TapAgrico, in the northern midlands of Tasmania. Initially, the company would invest $ 750,000 in Tasmanian Agricultural Producers Pty Ltd or TapAgrico for a stake of 28.4%. The company also holds a call option to boost its stake in TapAgrico to 34.6%. The terms of the call option remain same. The investment would be directed towards the purchase of a hemp seed dryer, storage and handling equipment and other key infrastructure. The investment would support the expansion of ECS cultivation and other hemp manufacturers in the region.

On the same day, the company also announced to have inked a retail food distribution agreement with Eden Foods. Under the terms of the deal, a range of ECSâ retail food products, including hemp seed oil, hemp hearts, capsules, curry sauces, soups and protein mixes would be made available to the network of retailers of Eden Foods in Tasmania.

Operating under a âFarm to Pharmaâ pharmaceutical model, THC Global Group Limited (ASX: THC) announced (31 July 2019) to have obtained two licences for the manufacturing of cannabis, as part of its quarterly update for the period ended 30 June 2019. The cannabis manufacture licences were awarded by the Australian Office of Drug Control (ODC). Of the two, one licence is for THCâs bio-pharmaceutical plant (Southport) in the Southern Hemisphere, which is engaged in extraction activities. The facility is engaged either in the production of Active Pharmaceutical Ingredient (API) isolates, which are GMP compliant, or full-spectrum and broad-spectrum extracts. It has an initial annualised production of 12,000 kg. In the fourth quarter of 2019, the company intends to conclude full product validation for TGA certified bulk API handling and manufacturing at the facility. Moreover, THC plans to start revenue generating production in early 2020.

The second licence was awarded to the Bundaberg Strain facility, which is engaged in research & development and cultivation activities.

During the concerned quarter, at the end of which THC had a cash balance of $ 5.68 million, the company also made key appointments in Australia and Canada, with Laura Harvey joining the companyâs Canadian operations as Chief Operating Officer and Scott Coleman joining the companyâs Bundaberg facility as Quality Manager. The company also appointed Elsie Green as the Compliance Officer across all cannabis projects in Australia. Its net cash used in operating activities during the quarter ended 30 June 2019 stood at $ 1.89 million. 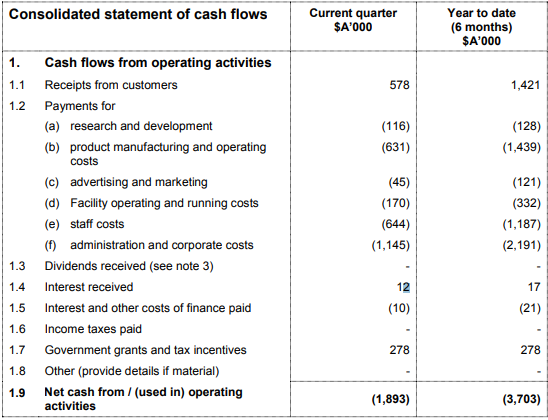 In early August 2019, Creso Pharma Limited (ASX: CPH), a developer of cannabis and hemp de-rived therapeutic, nutraceutical, and life style products, announced the signing of a distribution agreement between the company and JC Logistics Ltd t/a Medleaf Therapeutics for the distribution of CPHâs cannaQIXÂ® 50 and 10% CBD Oil in New Zealand till 31 December 2022.

The agreement also has the clause of minimum purchase targets and CPH can end the agreement by giving a notice of six months, if the company is not able to attain its targets. Both the companies have already confirmed the placement of second order for the cannaQIXÂ® 50 after the company received good response for the product in New Zealand during early 2019.

Moreover, for the June quarter 2019, the company reported a 434% increase in revenues from sales of human and animal products to CHF519,603 compared to the March 2019 quarter. The company at the end of the June quarter, had cash and cash equivalents of $ 3.580 million. While during the quarter, cash used in operating activities stood at $ 2.37 million and cash used in investing activities reached $ 0.626 million. Its net cash from financing activities was $ 3.35 million for the quarter ended 30 June 2019. For the next quarter ending September 2019, the company expects cash outflows of $ 3.62 million. 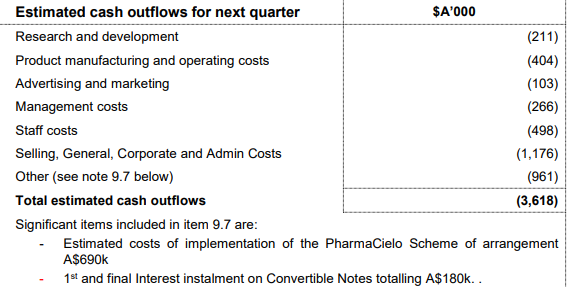 CLICK HERE FOR YOUR FREE REPORT!
Tags:
Creso Pharma Ltd (ASX: CPH) ASX: THC ASX: ECS
All pictures are copyright to their respective owner(s).Kalkinemedia.com does not claim ownership of any of the pictures displayed on this website unless stated otherwise. Some of the images used on this website are taken from the web and are believed to be in public domain. We have used reasonable efforts to accredit the source (public domain/CC0 status) to where it was found and indicated it below the image.