According to the World Health Organisation, about $6.5 trillion is spent on the healthcare every year globally. With the global demand for healthcare products and services growing significantly, investment in the healthcare sector seems to be a good idea. The healthcare sector is one of the major sectors experiencing the discovery of new technologies, used for the treatment and diagnosis of multiple diseases. For investors looking to diversify their portfolio, having exposure to the promising healthcare industry could be an attractive option.

The healthcare sector includes a range of different sectors like pharmaceuticals, therapeutic clinics, hospitals, etc. Investors can make enormous profits by investing in either of the sectors or the healthcare industry as a whole by using the multifaceted approach. As the healthcare sector is a wide sector, it is affected by several variables like population, technological advances, cost controls, consumerism, etc. It is important for the investors to keep the trend of these variables in mind while investing in the sector.

Australia is a key player in global healthcare due to its world-class research capabilities, a strong and stable business environment and an efficient regulatory system. The country contains some of the world’s leading healthcare professionals that are improving the health outcomes of patients.

The Australian Government’s Department of Health engages with a wide range of stakeholders to providegood health amenitiesfor all Australians. The federal government offers various healthcare benefits to its citizens like subsidising aged care services, purchasing vaccines for the national immunisation program, funding for health and medical research, regulating and supporting private health insurance, subsidising hearing services and much more.

A Look at Australia’s Healthcare Statistics 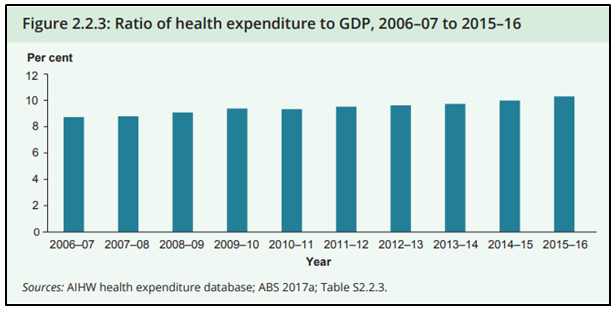 The Australian equity market boasts of many good healthcare related shares. Let us now have a look at few of the healthcare companies listed on the Australian Stock Exchange:

One of Australia’s leading pharmaceutical distributors,Australian Pharmaceutical Industries Limited (ASX: API) is the parent company of Pharmacist Advice, Soul Pattinson Chemist and Priceline Pharmacy. The services offered by the company includes marketing programs, wholesale product delivery, business advisory services and retail services. It is also one of the fastest-growing beauty and health retailers of Australia.

In an announcement on ASX on 31st May 2019, the company informed that it has consistently increased its dividend payments over recent years to shareholders, and its dividend payout ratio stands at 77 per cent.

The company reported an underlying NPAT of $26.8 million in its half-year financial results announced on 17th April 2019 for the six months ended 28 February 2019. The total revenue witnessed a rise of 6.6 per cent to $1.98 billion on pcp. Correspondingly, the Earnings before interest and tax (EBIT) of the company was 5.8 per cent up on pcp to $44.4 million during the period. Also,

The financial position stood strong, enabling the company to invest in Sigma Healthcare, offering additional inventory to capitalise on sales opportunities and acquire Clear Skincare during the period. 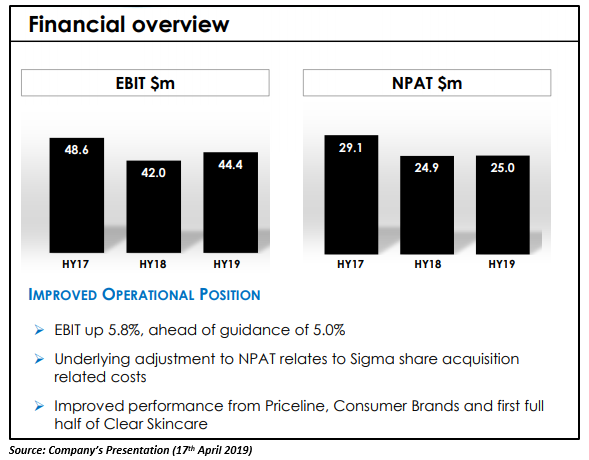 In May this year, the group released the Annual General Meeting 2019 presentation titled “Future Focused Healthcare”. The presentation incorporated the details on thegroup’s annual financial results, its business transformation program, merger proposal and its strategy and direction. The group mentioned in the presentation that it has a strong future as a standalone business with unanimous support of its Board, management, and advisors.

The annual financial results for the period ending 31 January 2019 were announced by the group in April this year. The NPAT (net profit after tax) attributable to owners of the group stood at $36.52 million, which was 33.7 per cent down on pcp. The EBITDA of the group was also 17.5 per cent down to $76.5 million relative to the prior corresponding period’s EBITDA of $92.83 million. 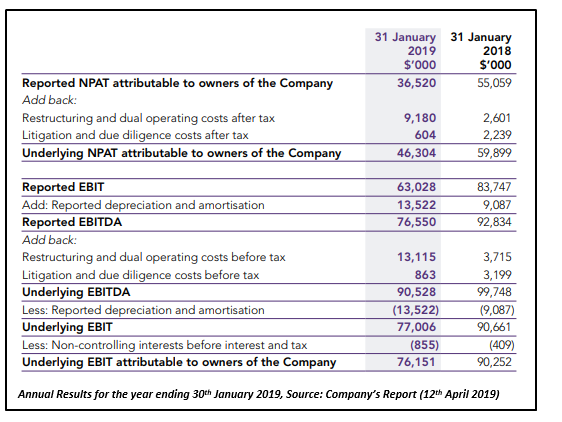 The company’s stock ended higher on ASX on 19th July 2019 at AUD 0.600, up by 1.695 per cent in comparison to the previously closed figure. The market capitalisation of the stock was noted as AUD 625.07 million at the time of writing the report. SIG has delivered a return of -0.84 per cent, 16.83 per cent and 15.69 per cent in the previous six months, three months and one month respectively.

One of Australia’s foremost listed healthcare businesses, Healius Limited(ASX: HLS) is dedicated towards providingreasonable, accessible and quality healthcare for all. The company has an expansive network ofdiagnostic imaging centres, multidisciplinary medical centres, day hospitals and diagnostic imaging centres. The company is delivering world class facilities and support services through its extended network.

The company declared an interim fully franked dividend of AUD 0.038 related to a period of six months recently that represented a payout ratio of 60 per cent of the underlying NPAT. The dividend was to be payable on 26th March 2019 and carried a record date and ex-date of 18th March 2019 and 15th March 2019, respectively. The company informed that it has a Dividend/Distribution Reinvestment Plan (DRP) and Bonus +Security Plan or equivalent (BSP) for the distribution. Also, a corporate tax rate of 30 per cent was applicable to the dividend for franking credit.

The company released its half-year results in February 2019 for the six months ended 31 December 2018. The company reported an underlying Net Profit After Tax of $39.4 million and Underlying Earnings Before Interest and Tax of $73.1 million during the period. The revenue of the company improved 4.7 per cent on pcp to $871.6 million. The company expects its underlying NPAT to be between $93 million and $98 million in FY 2019. 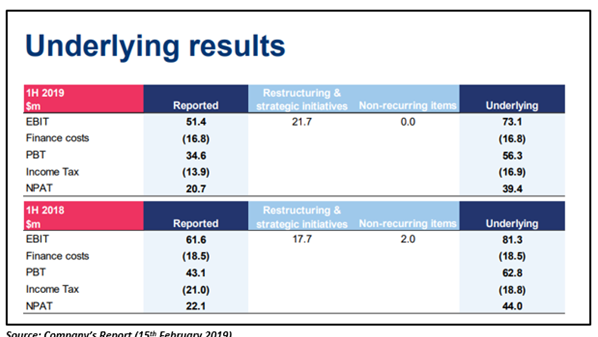 HLS closed the trading session, higher at AUD 2.94 on ASX on 19th July 2019, up by 0.341 per cent in comparison to the last closed price. The stock’s market cap stood at AUD 1.82 billion, and ~579,647 number of company’s shares traded on ASX. The stock has generated a return of 20.08 per cent on a YTD basis, which underlines its strong performance.