Australia is a passionate sporting nation, and sports here plays an important role in connecting the society. In Australia, people and visitors from across the world enjoy sports, drama and excitement. Australia is a great place where people not only from Australia but across the globe come together and socialise over sports.

In the period between December and February 2020, Australia brings a variety of sports events. The upcoming event is on the next day of Christmas, i.e. on the boxing day where people can enjoy Rolex Sydney Hobart Yacht race.

2019 Presidents cup has started from 9 December 2019 and will close by 15 December 2019 at Melbourne Golf Club. In 2020, Adelaide will be hosting the Santos Tour Down Under cycling race which will start on 16 January 2020 with lots of entertainment within and around the city. Next in line is tennis, music and festival fun from 20 January 2020 to 2 February 2020 at the Australian Open in Melbourne. On 17 February and 18 February, there would a huge skateboarding competition at Bondi Beach and by end of February Australia would host ICC Women's T20 World Cup.

During the autumn season, the Adelaide 500 race would take place from 20- 23 March 2020 in South Australia, motor racing would take place at the Albert Park Formula 1 circuit in Melbourne. Rolex Australian Grand Prix and soccer A-League grand finale will take place during this season. Before the arrival of winter, World Surfing Championships would also be taking place.

Other than the sports events in Australia, Summer Olympics 2020 is also in line which would take place in Tokyo, with round 206 nations and more than 11,000 athletes participating in the same.

Physical fitness and wellness are important qualities required for an athlete, and the adoption of the technology has started changing lives on the sports and wellness front. Beginning with technological innovation, the advent of wearable devices has helped athletes in improving their performance.

A Glance at Recent Sports Technology:

A good athlete is one who possesses who has below features:

The advent of technology in the sports segment has facilitated these athletes in achieving their goals and pushing their limits. As highlighted above, fitness plays an important role for an athlete. The lack of fitness and precision can result in sub-par performance. One champion gets distinguished from the other even by the difference of a second.

With the rise in the number of sportspersons in this highly competitive world, through the application of cutting-edge technologies, an athlete can differentiate himself/herself from his/her competitors. In the era of digital technology, the way professionals in the field of sports play, train, coach, recruit and recover from the fatigue can be captured through the system and changes can be brought about by using advanced analytics as desired.

Some of the Devices in Sports Technology:

Now let’s look at two such Australian companies in this field. The first is the list is Catapult Group International Ltd and Kitman Labs

Catapult Group International Ltd (ASX: CAT) is an ASX listed company which develops technology that assists athletes and teams to perform to their actual potential. The company was established from an alliance between the Australian Institute of Sports and Cooperative Research Centres. 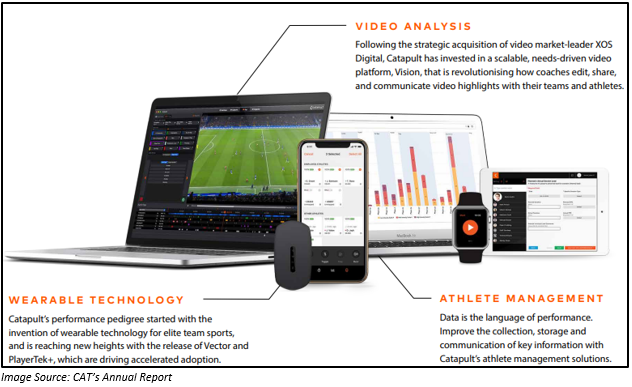 The company products include:

Kitman Labs the industry-leading sports analytics company has introduced the first athlete optimisation system in the world to enable the evolution of athlete performance. It would be for the first time all the data of a player will be processed as well as analysed in a single place. Data is collected using simple tools. Medical record of the athlete is linked to advanced analytics, and flexible reports and real-time risk alerts are provided.

The company uses Artificial Intelligence for increasing the performance and monitor health of an athlete. Many teams around the world in NFL, NBA, NHL, EPL, Bundesliga, AFL, NRL and many more are relying on the powerful insights provided by Kitman Labs to place their best team on the field and outperform the competition.

The company is established in professional sports arena as well as driven by some of the sharpest data scientists in the world, Kitman Labs is dedicated to constant innovation to solve the toughest challenges in human performance and reveal the links between performance, health, as well as training.