The technology-driven payments company, Afterpay Touch Group Limited (ASX: APT) is a major player of the “buy now pay later” industry. Afterpay is an alternative to traditional credit, which has gained significant popularity in the Australian and New Zealand markets. Today (on 12th June 2019), the company’s shares were up 6.082% during the intraday trade.

To put things into perspective, the company recently announced that it has raised $317.2 million via a fully underwritten institutional placement, which received a strong response from the company’s existing as well as new shareholders. The company is now planning to offer eligible shareholders an opportunity to purchase new shares in Afterpay under a Share Purchase Plan, under which shares will be issued at $23.00, being the Placement price, and the 5-day VWAP of Afterpay shares up to the SPP closing date. The company is planning to raise approximately $30 million via SPP.

In the first half of FY19, APT’s total income increased by 85% in 1H FY19 from $60.7 million in 1H FY18 to $112.3 million, primarily driven by the continued strong growth in Afterpay underlying sales, which was partially offset by the impact of first-time accounting standards adoption.

The Afterpay segment, which includes Afterpay AU, Afterpay US, and Afterpay Other segments, was the primary growth driver and contributor to total income. For the half year period, the company reported underlying sales (the total value of sales processed through the Afterpay platform) of $2.3 billion, increasing by $1.4 billion or 147% on the previous corresponding period (pcp), driven by a more than doubling of active customers and active merchants, as well as increased usage of the Afterpay service by existing customers to pay for their purchases.

The company reported a statutory loss before tax of $21.5 million, which was largely due to share-based payments, one-off items, first-time adoption of AASB 15 and AASB 9 and depreciation and amortisation.

The company’s immediate markets, where Afterpay is present, represents a $6 trillion opportunity with Australia, UK and US being the three main markets with a combined online contribution of A$780 billion.

A payment solutions provider, Splitit Payments Ltd. (ASX: SPT) is a technology company, which provides its customers with an easy way to pay for purchases in monthly instalments. Splitit Payment Platform provides end-customers with a seamless instalment option at checkout (online and in-store) and provides merchants a tool that can increase sales/order values and reduce cart/checkout abandonment. The Splitit payment platform was launched in the year 2016 and seeks to target worldwide retail markets with a focus on online credit card sales. Through this platform, the company intends to provide merchants with a tool to increase sales and average order values while reducing cart/checkout abandonment. In the past three years, the Company has expanded internationally into the United States, Europe, Australia and Asia.

The company is currently in infancy of establishing its presence in the United States, Europe and the Asia Pacific market. The company’s ability to profitably scale its business is heavily reliant on increases in transaction volumes and in its customer and merchant base to increase revenues and achieve profitable operations.

The business of Splitit depends on its ability to commercially exploit the technology and intellectual property, including its technological systems and data processing algorithms. The company’s funds are mainly derived from transaction fees, which is paid by its merchant clients in relation to customers who utilise the Splitit service on their website or in store.

The company was listed on ASX in January 2019, and since then, its growth in merchant and user take-up has been faster than expected as depicted in the figure below. 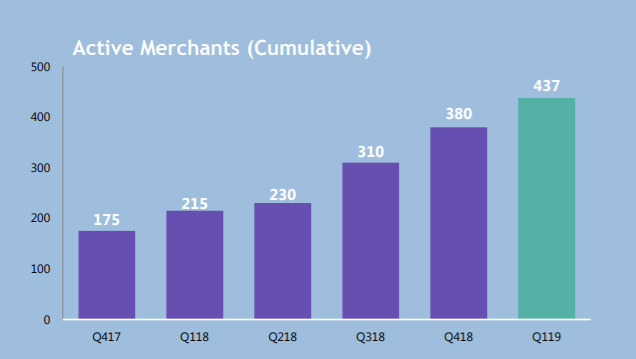 Recently, on 11th June 2019, the company communicated that in accordance with the ASX Listing Rule 3.10A, 355,539 fully paid ordinary shares (Escrowed Shares) were released from mandatory escrow on 8th June 2019.

Last month, the company raised $30 million in new equity via a fully committed placement to institutional, sophisticated, professional and experienced investors to pursue its growth strategy at a faster rate.