11 Industrial and Material Stocks on ASX

The companies under discussion in this article are from the industrial and material sectors. These sectors comprise of companies from a range of industries, including building products, construction and engineering, machinery, air freight and logistics, airlines, marine, road and rail, transportation infrastructure, chemicals, construction materials, containers and packaging, and paper and forest products.

On 25 November 2019, the company announced that it was selected as a preferred contractor for delivering the Yanchep Rail Extension and the Thornlie – Cockburn Link, which is part of Perth’s METRONET Program. The project would be delivered through a joint venture with CPB Contractors, part of CIMIC Group (ASX: CIM), under an alliance-style project.

The project would be funded through the Western Australia State Government and the Australian Federal Government. The company’s part of work includes railway construction, relocation of freight lines, station platform extensions, station construction and other station modifications, construction of new road-rail bridges and other associated work.

It was reported that the work on design would be commenced immediately, with construction likely to start in May 2020 and due for completion in 2023. In addition, the company is delivering Stage 1 of the Parramatta Light Rail project in a fifty-fifty joint venture with CPB Contractors for the New South Wales Government.

On 25 November 2019, the group reported regarding securing a contract in partnership with Downer EDI Limited (ASX: DOW) to deliver the Yanchep Rail Extension and the Thornlie – Cockburn Link, as part of Perth’s METRONET Program.

Recently, the group subsidiary CPB Contractors was elected to work on an upgrade project. It was reported that the construct and design contract concerning the northern section of the M80 Ring Road in Melbourne would deliver a revenue of ~$331 million to the group.

The program is funded by the Government of Australia and Victoria, and the program is designed to improve safety of drivers, increase capacity and reduce congestion.

Recently, the group convened its 2019 Annual General Meeting and provided a business update for the first quarter of 2020.

QUB reported that the division is trading slightly behind the expectations, while there is no change to the full-year outlook. Chalmers transaction was completed during the period, and the synergies are expected to be delivered in FY20.

QUB mentioned that the division is trading slightly ahead of expectations, and the first quarter results had higher bulk volumes, which was partially offset by a decline in the vehicle and RoRo cargo volumes. In addition, the capex at Moorebank Logistics Park is estimated to be around $150 - $200 million higher than previously indicated.

QUB reported that the division is trading behind the expectations due to weaker market volumes, and the continued decline in the volumes might impact the full-year outlook. In Q1, the group received $5 million in distribution from Patrick.

On 25 November 2019, the group reported to have successfully completed the placement and the institutional component of the 4 for 21 entitlement offer of new ordinary stapled securities to global and domestic institutional investors.

ALX raised approximately $1.2 billion, and the placement received strong demand from new existing institutional investors, resulting in an oversubscription. The group is undertaking the capital raising to fund an acquisition, among other reasons.

Recently, ALQ announced 6-month results for the period ended 30 September 2019. Revenue from continuing operations increased by 11.3% to $919.1 million compared to $826.1 million in the previous period. 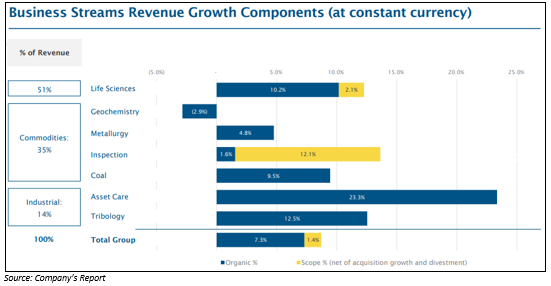 The underlying NPAT (continuing operations) was $98.2 million for the period. The company declared an interim dividend of 11.5 cents per share to the shareholders in records on 28 November 2019, partially franked at 30 per cent.

Despite macroeconomic uncertainty, the business fundamentals continue to remain strong. The life sciences division is expected to deliver overall margin expansion of 50 bps in FY20. The group’s underlying NPAT is likely to reported at $185-$195 million. In addition, the guidance is dependent on no material changes with respect to the operating and economic environment.

In October, the company convened its Annual General Meeting, and Mark Chellew, Chairman of CWY, highlighted the performance of Cleanaway Waste Management during the past financial year (FY19). The company had delivered an increase in profit along with a 42 per cent increase in dividends at 3.55 cents per share compared to 2.5 cents per share in the previous year.

He said that the company has a strong financial position with net debt of $658.5 million, meaning a net debt to EBITDA ratio of 1.4 times. Also, CWY is considering using longer tenor debt to strengthen the debt portfolio further.

On 25 November 2019, the company notified that the trial scheduled to commence at the Supreme Court of Queensland in November had been adjourned to 6 February 2020. The matter is related to the Statement of Claim filed by Wagners Holding Company Limited (ASX: WGN) at the Supreme Court of Queensland. WGN is seeking resolution of the dispute with the company through the court.

Earlier this month, the company convened its 2019 Annual General Meeting. In the Q1 FY 2020 trading update, it was reported that volume pressures in several businesses reflected a softer activity.

In addition, the company declared an unfranked dividend of US 10 cents per share to the shareholders in records on 18 November 2019 with a pay date of 20 December 2019.

Recently, the company released full-year results for the period ended 30 September 2019. Accordingly, the company recorded sales revenue of $5,878 million compared to $5,373.8 million, delivering an increase of 9%.

Net operating and investing cash inflows for the period were $378 million. ORI incurred capital expenditure of $424 million, including $37 million on rectification works at Burrup.

In addition, ORI declared a final dividend of 33 cents per share with 5 cents franked to the shareholders in records on 13 November 2019 with a pay date on 13 December 2019.

The company reported a net profit after tax of $152.4 million compared to $207.9 million in the previous year. IPL has incurred $140 million in a non-recurring item for the period, lowering the profits.

In addition, IPL has declared a final dividend of 3.4 cents per share with a franked amount of 1.02 cents to the shareholders in records on 2 December 2019 payable on 8 January 2020.

Recently, the company provided an update on the New Zealand International Convention Centre (NZICC) project, which was a subject of fire in late October. It was reported that the company’s employees were working closely with fire service teams and local authorities to manage the fire impact.

FBU noted that the site had been returned to the company, and access remains restricted due to the ongoing assessment and investigation into the cause of the fire. In addition, the company was working to determine the fire impact on the project, and additional information would be provided during the interim results announcement in February 2020.